From iQS to the latest OE manufacturers’ offerings

In the late summer of 2017, Polaris announced the first electronic on-the-fly (OTF) shock adjustment system for the 2018 RZR XP Turbo Dynamix Edition. Fox and Polaris engineers had been working on the Fox Live Valve shocks since 2011. Through distributor and co-developer Shock Therapy, Fox then released a stand-alone iQS upgrade for any 2017-or-newer 2.5/3.0 Fox Podium shock in 2019. At the same time, Honda released its 2020 Talon 1000X-4 Live Valve, and two-seat Talons got the same option for 2021. All of these OTF systems utilize the same Fox Live Valve electronic base valves, which replace the mechanical compression adjusters on Fox Podiums, as did the all-new 2021 Yamaha Wolverine RMAX 1000 Limited Editions. Kawasaki joined the OTF party with the Teryx KRX1000 eS, which has Kawasaki Electronic-Control Suspension (KECS). Also with Fox, Can-Am went a step further with the 2021 Smart-Shox DDA system, which electronically alters compression and rebound damping, for 2021 Maverick X3 X rs Turbo Rs and RRs. For 2022, Polaris and Fox answer Can-Am’s Smart Shox with Dynamix DV (Dual Valve) for the all-new RZR Pro and Turbo R Ultimates.

Fox intelligent Quick Switch (iQS) is basically four Live Valve motorized base valves that are controlled by a Fox/Bosch ECU unit via a wiring harness. Any 2.5 or 3.0 Fox Podium with a QS3 (Talon/base X3/Wolverine RMAX), LSC (Teryx KRX) or RC2 (X3/YXZ) compression adjuster will accept the Live Valve e-click base valves. Fox iQS has a three-position dash toggle that tells the Live Valves to open to full Soft for rock crawling or trail riding, adjust to Medium for desert, or Hard for dunes and fire-road drifts. Hard also acts as a panic button, so you can get the best ride quality on Soft and instantly close off the base valves for emergency impacts. Shock Therapy is working to get the Fox-built steering wheel with switches from the Dynamix 2.0 RZR Pro XP, and we have tested the iQS system on the RZR XP Turbo, X3 X rs Turbo R, Teryx KRX1000, and Talon 1000R. ST sells the non-interactive iQS system for $2075, and the OTF adjusters are totally independent of any other shock features, such as IBP, BOC or aftermarket shock tuning. Yamaha adds iQS to its Wolverine RMAX2 and RMAX4 LEs with Comfort, Medium and Firm modes; the price difference compared to XT-R models is $2000. Wolverine 1000 shocks are Fox 2.0 Podiums.

Honda’s Live Valve Edition Talons add sensors on the engine/DCT, steering wheel, brakes and mode switch, and the Talon ECU by Bosch adjusts the Live Valves to be interactive. When braking, the Live Valves stiffen compression on the front shocks, and the outside valves stiffen in turns to fight body roll. Hard acceleration causes the rear Live Valves to increase damping to fight squat. The automotive-grade ECU reads inputs every 5 milliseconds (or 200 times per second) and takes only 20 milliseconds to fully stiffen the various base valves; however, the Talon Live Valve mode switch only has two settings: Sport (hard) and Normal. The 2020 X-4 Live Valve has an MSRP only $2000 more than the base model. Live Valve Editions also work with Honda’s Electronic Brake Distribution (EBD-i4WD) to control slides, and they have softer spring rates than base Talons. 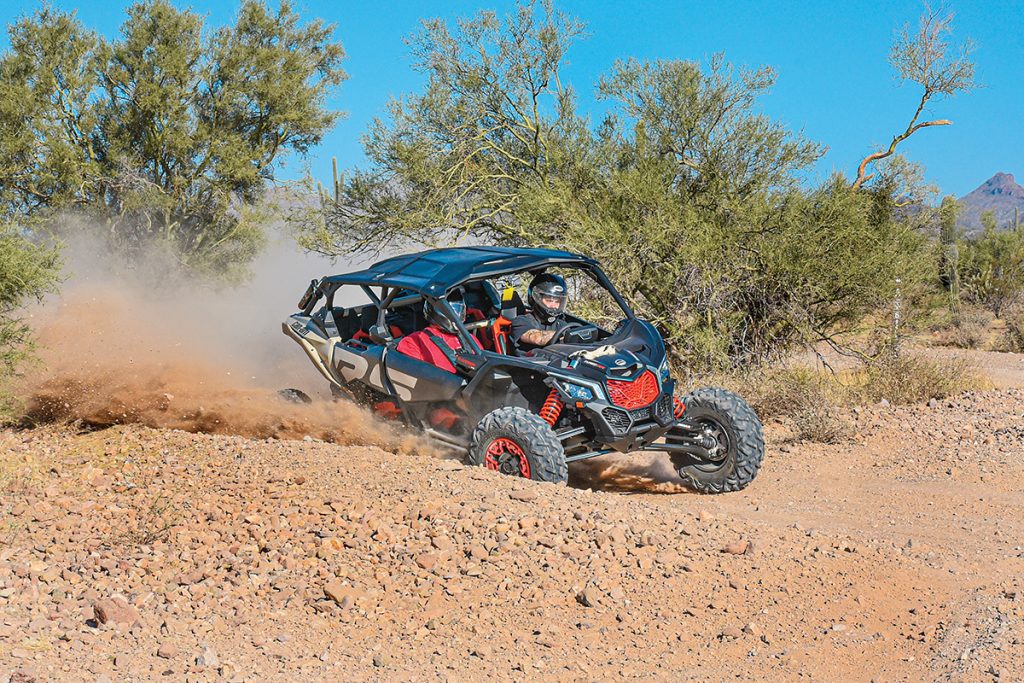 Polaris’ original Dynamix active-suspension system is more complicated than Honda’s and uses seven sensors. It has engine, CVT, steering wheel, throttle and brake sensors, plus a three-axis gyro (pitch, roll, yaw) and three-axis accelerometer. Dynamix stiffens front shocks during braking, rear shocks during acceleration and outside shocks in turns, but it also keeps the outside shocks stiffer when counter-steering into slides. Also, when you stab the brake pedal and then the gas, like when encountering a washout, it keeps the front valves stiff for three seconds. Dynamix Live Valves have double the adjustment range of mechanical adjusters and modulate both high- and low-speed compression. Also, Dynamix displays each shock’s setting on a Ride Command screen. Below 20 mph in Comfort mode, the base valves are at full soft (displayed “0”). Sport puts valves at 30–40 percent, and Firm maxes compression damping at 10. When you turn the ignition key on with the Firm setting, it noticeably raises ride height. 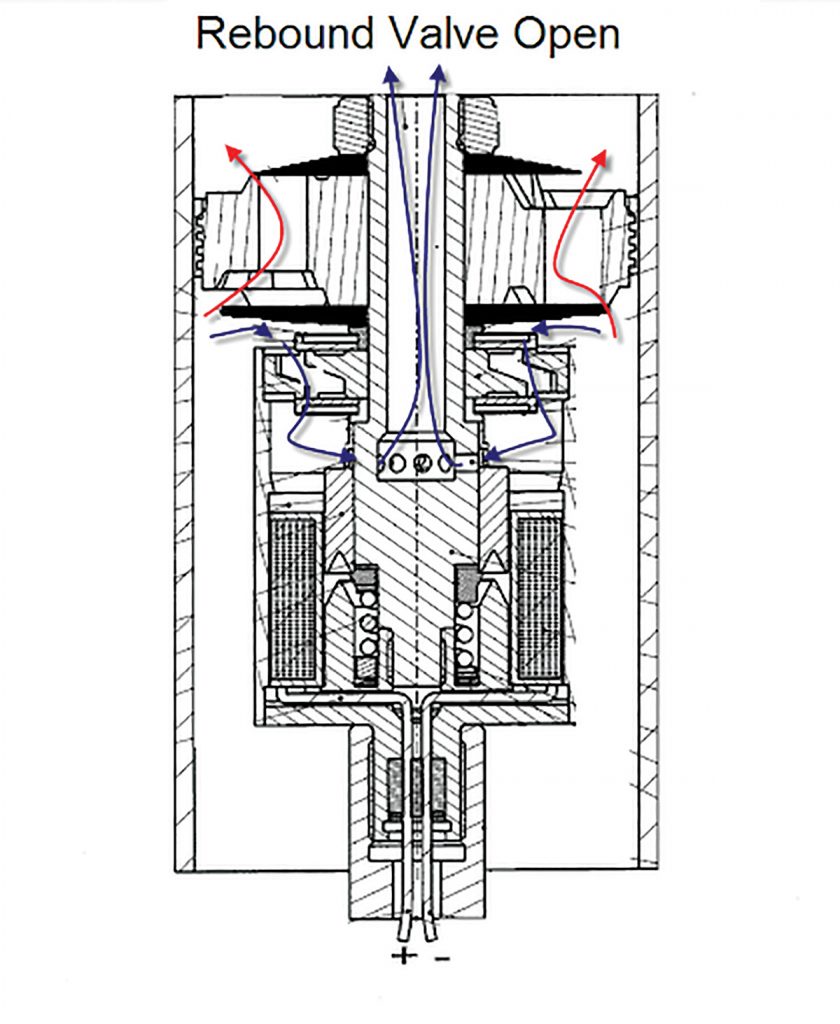 In effect, the Live Valve X2 shocks become electronic hydraulic torsion bars to fight the dreaded bicycling in turns and stink bug under hard braking. On jumps, Dynamix DV maximizes compression and lightens rebound to fully extend all four shocks. On landing, maximum compression is maintained to resist bottoming, but Dynamix DV also increases rebound damping to prevent bouncing from spring rebound. As the Pro R Ultimate drives out of the landing, normal settings return. Dynamix DV also lets the driver choose between Comfort, Rock, Baja and Track settings via arrow buttons on the steering wheel, and the Panic button on the wheel increases compression to 10 while softening rebound for emergency impacts.

There is also a Demo mode that allows the driver to experience and assess the feel of the steering wheel, throttle and brakes associated with each ride mode. With the Ultimate in Park, ignition/key on and engine off, toggle through the ride modes with the arrow buttons. When driving and changing ride modes, icons appear on the Ride Command screen’s right side, no matter what page is displayed. Then toggle up or down to the desired ride mode.

Kawasaki’s KECS connects four Fox 2.5 Podium Live Valve piggyback shocks, which replace 24-position low-speed compression adjusters on other KRX models, with a Bosch Electronic Control System with a first-ever six-axis IMU on a UTV. Drivers choose between ride modes—Soft, Medium and Firm—and the KECS analyzes inputs from the fuel-injection ECU and a steering-angle sensor, plus speed, vehicle axis and terrain to determine damping for each shock as needed. Engineers tuned the system to deliver optimum performance and ride comfort. Like all LV systems, KECS stiffens outside shocks during cornering, front shocks during braking and back shocks under hard acceleration. KECS also works with Fox Internal ByPass (IBP) position-sensitive damping to deliver a plush ride in all but the Bump Zone at the end of travel. KECS also upgrades the cockpit to a 7-inch TFT color LCD digital screen with three selectable brightness levels and back-lighting, plus selectable suspension, meter, audio, camera/photo, vehicle info and menu pages.

Fox and Can-Am developed the 2021 Smart-Shox Dynamic Damping Adjustment (DDA) to have OTF compression and rebound adjustments via an electronic adjuster on the shock shaft next to the piston. Two sensors per shock measure shaft speed and position 200 times per second and feed info to the ECU, which then stiffens or softens both damping adjusters as needed. The DDAs retain a plush ride while reducing body roll, braking nose dive, squatting under hard acceleration, and kicking over whoops or jumps. DDA adjusters have increased range of rebound adjustment over the Podium RC2 mechanical adjusters, and they are developed to increase rebound damping on inside shocks in turns and rear shocks on braking to enhance traction.

The semi-active OTF uses multiple sensors like Polaris Dynamix but modulates both compression and rebound for extra stability. This works with the pistons’ velocity-sensitive valving and position-sensitive IBP ports, and it also provides bottom- and top-out protection. The Can-Am Smart-Shox DDA also displays on the X3 7.6-inch instrument cluster and can be adjusted for larger tires and for widths up to 80 inches. The price difference between the X3 X rs Turbo RR and Smart-Shox Turbo RR is $1700. The downside of the DDA system is that the harness is at the bottom of the shock where it’s more prone to roost damage, whereas all LV/DV harnesses are on the reservoir and somewhat protected by bodywork.

MADE IN THE USA OPEN TRAIL WINDSHIELD