ON THE PODIUM: DEEGAN SECOND AT ARCA LUCAS OIL 200

Jimmie Johnson has been one of the few off-road racers to become a NASCAR legend. The former Mickey Thompson Grand Prix Ultra-Lites (the UTVs of the 1980s and 1990s) champion and MTGP Pro 2 star turned to NASCAR and became the premiere-class Sprint/Monster Energy Cup seven-time champion. The former motocross racer, whose father was Ricky Johnson’s practice-bike mechanic, set many records along the way and has transformed NASCAR racers into athletes with his training program. As “Seven Time” started his last full-time Cup season, another off-road racer is fast becoming NASCAR’s rising star – Hailie Deegan, the “Dirt Princess.”

At Daytona Speed Weeks, NASCAR’s Super Bowl, Deegan was fast qualifier at the ARCA Menards Lucas Oil 200, and she went on to take second in the 200, the highest finish ever for a female in the series. In 2018, Hailie was the first and only female to score a pole in the NASCAR K&N Pro Series,  at the Las Vegas Star Nursery 100, a dirt-track race. She went on to win the NAPA Idaho 200, the first female to win in K&N Pro Series history.

Hailie first started riding dirt bikes at age seven. The daughter of Brian Deegan, an early pioneer in freestyle motocross and a founder of the Metal Mulisha, Hailie soon turned to four wheels and began training on go-karts. With Brian also switching to four wheels in the Lucas Oil Off-Road Racing Series (LOORRS) Unlimited Lites, Pro Lites and later Pro 2s, Hailie started racing in JR2 Trophy Karts. The new Dirt Princess (#538) won that championship in 2013, the same year her Dad won the Pro Lites title. She then won the Mod Kart championship in 2015 and also began training in UTVs.

Brian also won the LOORRS Unlimited Lites in 2009 and Pro 2 title in 2014, and he has 10 X-Games medals in FMX and Rally-X. He also trained in UTVs and became a Polaris Pro Athlete (and later a Can-Am X-Team athlete). Hailie  transitioned to Pro Lites and became the LOORRS Driver of the Year in 2016, the same year she began the transition to NASCAR in Legends racing.

FROM DIRT PRINCESS TO NASCAR STAR

Through the 2016 NASCAR Drive to Diversity program, Hailie joined Toyota Development and the NASCAR Next class in 2017, at 15 years of age. In 2018, she raced with Bill McAnally Racing in K&N Pro Series. UTV Action Magazine visited the Deegan Compound for a 6D Helmets ATR-2 press introduction, and Brian had bought land in Mooresville, North Carolina, to further her racing career.

She signed with Venturini Motorsports to race K&N Pro and ARCA Menards series and finished the 2019 season with a fourth at Phoenix ISM Raceway and third in points. For 2020, Hailie signed with DGR-Crosley to drive the #4 Monster Energy Ford in ARCA Menards series. At the first round on NASCAR’s biggest stage, she was TQ with a 183.572-mph lap and made history. She’s sure to set and break many records to come. 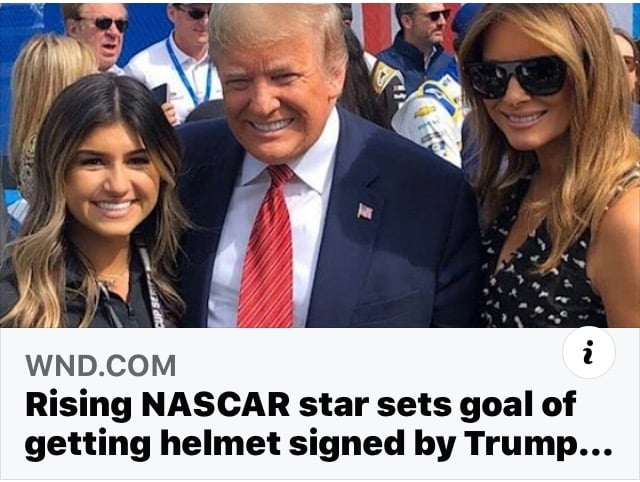 What better way to cap off President’s Day weekend than meeting President Trump, the Grand Marshall of the 2020 Daytona 500?