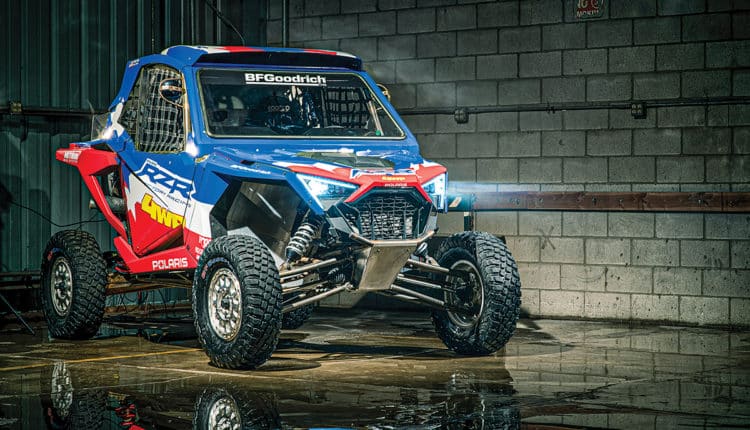 Beginning on January 3 and finishing on January 15, the famous Dakar Rally takes racers across nearly 5000 miles of brutal terrain in Saudi Arabia. The Polaris Factory Racing RZR Pro XP is specially prepared for the prestigious race, and, in some respects, surprisingly stock. The RZR Pro XP is proven, winning short-course races, WORCS races, East Coast XC races and the UTV World Championships all in the last year.

INSIDE THE DAKAR PRO XP

“We chose to race the SxS class at Dakar because we wanted to showcase what the Polaris RZR Pro XP is capable of, what defines its DNA—the pursuit of constant performance. Our vehicle is built from as many stock parts as possible to show their durability and performance capabilities when competing against the toughest competition in the world,” explained Robert Wilmot, Polaris RZR vehicle architect and lead dakar engineer. The Dakar Pro XP’s stock components include the Pro Star engine, intercooler, turbo, transmission, hubs, brake calipers and much more. The vehicle also utilizes a stock wheelbase.

The RZR Factory Racing RZR Pro XP is powered by a four-stroke, fuel-injected, DOHC, turbocharged, twin-cylinder, 925cc engine fueled by a 34.34-gallon fuel cell, and capable of a top speed of 80.77 mph. A Motec ECU with custom wiring and dash, custom switch pad and on-board diagnostics will ensure optimal performance, and a rear-mounted radiator with a custom roof scoop will provide maximum airflow. A lightweight lithium battery setup by Braille Battery will power the RZR Pro XP throughout its inaugural Dakar campaign.

The team is also using an FIA homologated chassis, customized by Jimco Racing and based off the Polaris RZR Pro XP platform. With a stock 96-inch wheelbase, 74-inch-wide stance, and custom suspension with an additional 1.5 inches of travel compared to stock, the vehicle is built to handle extremely high speeds in Dakar’s open desert and harsh terrain. A custom Fox Racing Shox suspension with increased reservoir capacity has been chosen for increased cooling, performance and greater adjustability.

In the cockpit, Sparco racing seats and safety harnesses ensure comfort and driver safety during the 12-day race. The chassis also has an integrated spare parts and tool storage supply, vital since there will be no pit crew, and drivers will need to make their own repairs while on the course.

ATV Vs. UTV: Which Is The Better Vehicle For Me?