The Polaris General 1000 redefines the sport-utility UTV, which is an all-new machine with the heart and legs of a RZR S 1000 and torso, trunk, muscles and nervous system of a Ranger XP. Aimed directly at the Arctic Cat Prowler XT1000 and Can-Am Commander 1000, the General 1000 EPS is the first sport-utility UTV with a 100-horsepower powerplant and more than a foot of travel at each end. While the RZR S 1000 is “all play” and the Ranger XP line is “work first,” the General is intended to appeal to the “play first, work second” UTV enthusiast and outperform existing sport-utility 1000-class UTVs.

WHAT’S A GENERAL 1000 EPS?
It’s part RZR S 1000 EPS and part Ranger XP, but with an all-new, boatstyle chassis for increased ground clearance. The ProStar 1000 DOHC inline twin is lifted directly from the 100-horsepower RZR S 1000, but it has an all-new CVT clutch with enginebraking system, belt and pedal map for smoothness and heavy lifting. Low range is lower than the RZR S for work and hard play, and power is re-tuned for more low-to-mid grunt and torque. Also, a much longer intake tract slows response compared to the RZR S, as engine and CVT intakes are ducted to under the hood. Suspension is also based on the RZR S 1000 with 12.25 inches of front and 13.2 inches of rear travel, plus dual torsion bars, and the new General borrows cabin components from the RZR S and Ranger XP alike.

The floor has foot braces and drains like the 60-inch RZR S, but new seats are placed 2 inches higher than the RZR and 1.5 inches lower than the Ranger. Curved half-doors give more elbowroom for driver and passenger and an overall width of 62.5 inches. The ROPS cage has more swooping lines than the Ranger, yet retain ProFit accessorization, and an all-new analog/ digital instrument package tilts with the steering wheel. There is also a Ranger-like dash with cubby holes and glove box, plus a large bin in the center console behind the aluminum range selector, cup holders and passenger’s left-hand grip. Behind the new cabin, a dumping bed with a 600-pound capacity rides over the engine and gives the General an 1100-pound payload capacity. Towing is 1500 pounds via a 2-inch receiver. Unloaded, the General has 12-inch ground clearance and it’s 7.4 inches fully loaded.

HOW FAST IS THE GENERAL?
It’s way fast for a sport-utility UTV. Polaris claims 0–40-mph acceleration in 3.6 seconds, but it definitely lacks the “yank” of the RZR S 1000. The Premium General is some 276 pounds heavier than the RZR S and has a much longer intake tract and revised engine/ CVT tuning for smoothness, but it still hauls the mail on the trail. We drove the General in New Mexico’s Carson National Forest at 7500-foot elevations and above, but we couldn’t find a straight long and smooth enough to top it out in high range. Where the RZR S will do 45 mph in low, the General tops out at 37 mph downhill. It’s plenty fast for tight woods work, and we had a blast pitching it into corners and drifting out.

WHAT ABOUT THE CVT/AWD DELIVERY?
It’s awesome! The re-tuned CVT engages smoothly for confident rock crawling, and spools up quickly to put 100 horsepower to the ground. The EBS system is excellent and helps set up fun drifts in turns, and the On-Demand AWD system pulls the front end around corners. We did some monster hill-climbs and rode up a tight canyon with lots of blown-down trees, and the delivery was excellent in all conditions. Truly confidence-inspiring stuff.

HOW AGILE IS THE HANDLING?
Mountain-lion agile. Where the RZR S 1000 has a 79-inch wheelbase, the General has a 81-inch wheelbase, and the extra weight slows down handling somewhat, but it feels a lot like the RZR S in tight turns. It’s definitely more agile than its recreation-utility competition, as the suspension and steering components are from the RZR, as is the close-ratio front diff.

HOW ABOUT THE SUSPENSION?
It’s in a class all its own. Polaris tuned the Base/Premium twin-tube HPG shocks to provide a very plush ride on rocks, roots and ruts, and we experienced all on the 45-mile USFS ride. Travel is 12.25 inches in front and 13.2 inches in back, and they’re wellbalanced for crisp handling. They also firm up well for big water bars, but we did bottom the front occasionally. The Deluxe General’s Fox Podium X 2.0 QS3 shocks are also well-tuned for a plush ride on trail junk and bottoming resistance when set on the softest of three selections. Faster driving and/ or heavier loads calls for going to the middle or even stiffest settings. The Fox shocks also have ring-type preload adjustment, while the HPGs have fiveposition preload.

HOW STRONG ARE THE BRAKES?
RZR S 1000-strong. Like the RZR, the General 1000 EPS has four-wheel hydraulic calipers with dual-bore fronts and single-piston rears squeezing large perforated rotors. Brake lines are braided stainless steel for a good feel at the pedal, and engine braking and the aggressive Dirt Commander tires also help whoa it down quickly, even in mud and snow.

WHERE IS THE GENERAL 1000 HAPPIEST?
On planet Earth. Working or playing, the General 1000 EPS is extremely capable and powerful, and the new cabin and half-doors keep the occupants dry and clean in snow and mud. It’s a great rock crawler, mud machine, woods weapon and explorer, with a great combination of power and agility, and it’s equally capable on the worksite, farm or ranch.

WHAT ABOUT TRAIL COMFORT?
It’s also excellent. The new seats are super comfortable and have a thin-film membrane to keep dry in rain and snow, plus texturing for extra grip. The driver’s seat is adjustable, and the passenger handholds on the center console and door are comfortable. The center console doubles as a padded arm rest, and the curved doors are solid and protective. Storage is ample, and the Deluxe has rubber lips to keep contents in the cubby holes. Noise and vibration levels in the cabin are low and comfort is high. We also really like the new instrument pods with analog speedometer and tach plus digital center section with several modes, plus digital mph and fuel level.

WHAT’S OUR FINAL ANSWER?
Polaris hit the bull’s-eye dead center with the General 1000 EPS. It’s a class leader in power, torque, acceleration, agility and ground clearance, and its work capabilities are also upper echelon. We’re all about sport, but this machine can also “get ’er done” on the farm, ranch, worksite or hunting camp. It’s got the right mix of RZR S 1000 and Ranger XP DNA, and the three versions will attract bargain hunters and accessorizers alike. On the bed graphics, the General has five stars, and it got five stars in almost all of our rating categories. 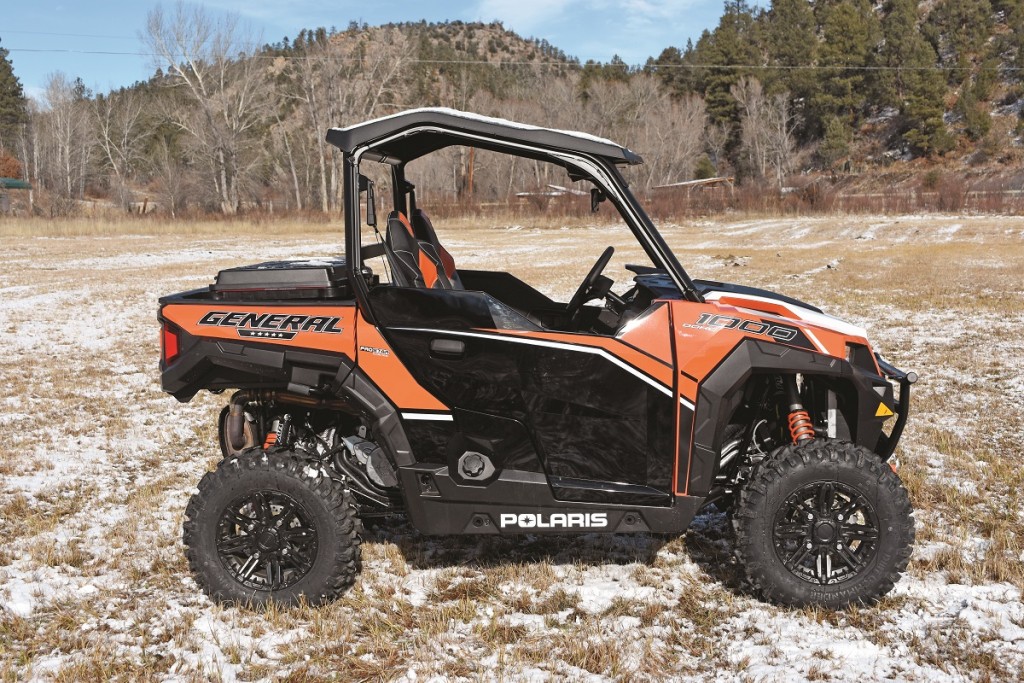 FAST FACTS YOU NEED TO KNOW ABOUT THE HISUN STRIKE 250