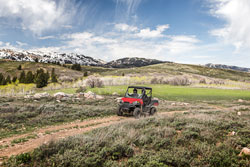 Recently a friend of my father and his wife gave us his Polaris Ranger 500cc. It had sat in a barn for years because as she tells it. He could not drive it far because it would disintegrate the drive belt. Eventually, he just gave up and purchased a different UTV. So now we have it and it surprisingly runs and the tires don’t even seem too bad, but that drive belt does start to smoke within a few miles and then it overheats and shreds. Do you have any idea what may be causing the problem? Dealers that I have contacted say to check the sheave alignment. Using a ruler, they look in line. So we are stumped at this point and hope you can shed some light on this problem.

Boots, sounds to me like the original owner broke a front motor mount and never replaced it. The late 2005’s – early 2006’s were noted for having a bad batch of rubber mounts. To do a quick check to see if your Zooter has a broken front mount, pull the seat off, put the Zooter in drive, stand on the brake and give a little throttle. You should visibly see the engine shift if the front engine mount is broken. This shifting of the engine when you give it throttle is also what causes your drive belts to overheat and disintegrate because the shifting causes the drive and driven sheaves to go out of alignment. You need to requisition Polaris P/N 3022076, Isolator, or one of the Aftermarket equivalent rubber mounts for all 4 of the engine mounts. Then a quick 5 mile road march with full pack and you will be ready for the broken motor mounts! Dismissed!