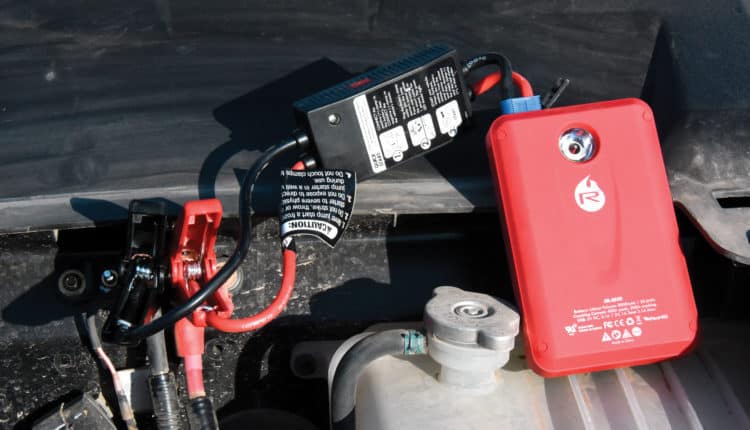 — Schumacher Electric is the largest producer of automotive battery chargers in the world, and Schumacher’s Red Fuel SL65 jump-starter is the smallest lithium-ion battery pack we’ve used. It fits in a jacket pocket, so the Red Fuel SL65 is a great way to carry back-up cranking power for our UTVs, especially if they have a lot of power-sapping accessories.

The SL65 is so compact that it fits inside a 12-ounce drink coozy, yet it cranks out 400 peak and 200 cranking amps via an 8000-mAh/29.6-Wh lithium-ion polymer battery. The SL65 has a Smart Cable with large clamps, Quick-Start button and LED indicator lamp that flashes to relay five protection codes—reverse polarity, short circuit, reverse charging, low voltage and high temperature. The SL65’s case has a rubber-covered Smart Cable port, USB ports for phones and tablets, a 5-volt input cable for the 100-/240-volt wall charger, an on/off switch, an LCD charge-level display and a handy flashlight.

The Red Fuel SL65 is UL-certified and has a plastic case with textured front and back covers. The Smart Cable has a plastic case with a resettable circuit breaker and second on/off button that you press and hold for a second to get a green LED, which indicates it’s ready to jump. The cables are rubber-coated, and the large plastic clamps have stainless steel springs and copper teeth for gripping the battery terminals. It also comes with an owner’s manual with troubleshooting guide and a nylon drawstring carrying bag.

The Red Fuel SL65 jump-started any ATV or UTV we tried it on and is claimed to be able to start a 3-ton farm truck if needed. The charge-level LCD readout is handy, and so is the LED light. Hold the button on the LCD frame for three seconds and the LED lights up. Toggle the display button again to choose between solid and two flash/SOS modes. This is great for jumping a UTV battery at night. The two USB ports are 2.1 or 1.0 amps at 5-volt DC for charging devices. Schumacher recommends charging the SL65 after every use and at least once a month for peak performance. Store it fully charged at temperatures between -5 and 144 degrees Fahrenheit. Also, the SL65 shuts itself off after 30 seconds if no USB device is connected.

While it might not pack the punch of larger jumper packs we’ve tested in the past, the Red Fuel SL65 is a very compact jump pack that has a lot of important safety features. The LED flashlight is particularly handy, and it’s a great big insurance policy in a tiny package. It’s great for adventurers who pack a lot of gear and spares in their UTVs, as the SL65 takes the least room of any booster pack we’ve used. Also, newer models of the SL65 will charge from any standard micro-USB charger, so no wall charger is needed.

ATV Vs. UTV: Which Is The Better Vehicle For Me?