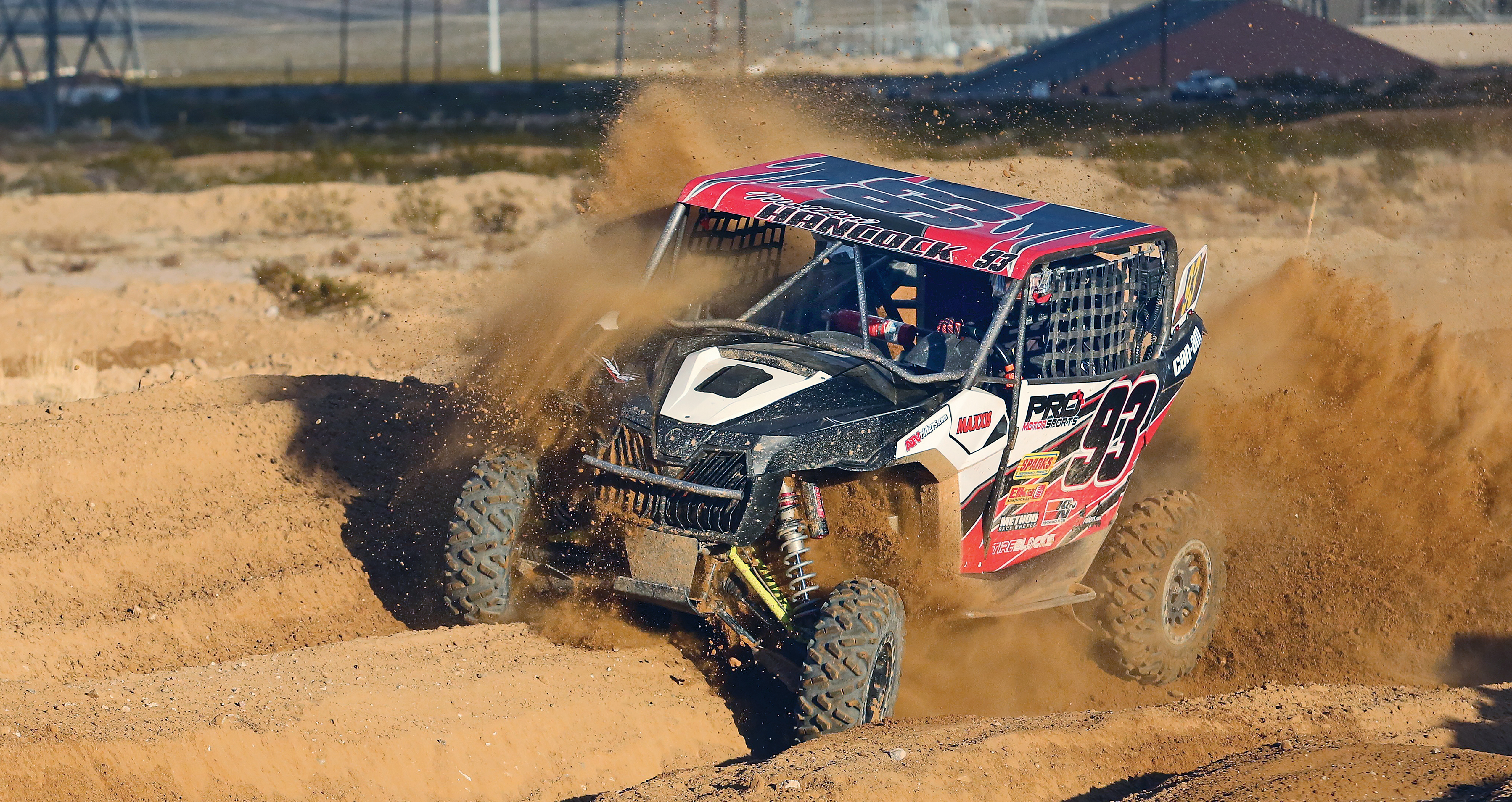 Rro Motorsport’s Matt Hancock is quickly proving that he can adapt to just about any vehicle in any off-road discipline. Growing up in the deserts surrounding Phoenix, Arizona, Matt started racing ATVs in the Whiplash desert series and progressed to the BITD Pro ATV Class as soon as he was old enough. Matt and his brother Jeff made the BITD Pro podium quite a few times but could never quite seem to top it. A few years ago, Jeff took a break from racing and Matthew dove headfirst into racing the WORCS Series.

Following his son’s passion, Matt’s dad Larry started the Pro Motorsports team and a performance race shop to accompany it. Matt took about two solid years to win an A-class ATV championship, and the team also jumped into SxS racing with the RZR 570 that year.

Going “all in,” as the Pro Motorsports guys are known to do, the 570 was an over-the-top rocket ship, and Matt and Davi Haagsma ran way out in front of the competition all year. In 2014, Matt and Davi both jumped to RZR XP 1000s to continue their battle and contest the Production 1000 class. Pro Motorsports built an incredible car right out of the gate, but it was still a work in progress. Throughout 2014, Matt’s car would see tons of testing, huge refinements, and even new technology as it became available. It took a few rounds of playing catch up, but by the middle of the season Matt was challenging for the win in every race.

Right around the third round, the team at Pro Motorsports decided that if the top few cars were pushing about the same horsepower and running similar shock setups, then they would have to be lighter to get the jump on the competition. Matt showed up at the next round with a completely new-looking car. They had chopped what they could chop, thrown away what they could throw away, and downsized every tube to the legal limit. The bare-bones diet cut out nearly 200 pounds, and it showed with multiple holeshots and a regular spot on the podium. Matt finished out the year in a close second.

THE CAN-AM DEAL
Just when the team had Matt’s XP 1000 completely dialed, Can-Am threw a proverbial wrench in the works. A factorysupported ride is what every racer strives for, and it was definitely too appealing for Matt to turn down. They struck a deal, and the Polaris got shelved for a whole new race program. Matt was hired to race a Maverick for the SXS Pro and the new Maverick Turbo for the SxS Unlimited.

Time constraints on getting new machines and building and testing them were very tight, and to make things even more difficult, the Turbo wasn’t even released yet. The Pro Motorsports team quickly went to work on the two non-turbo cars they were supplied with and would relay what they learned to the Turbo car.

Leaning on the knowledge they gained last year, Pro Motorsports focused on keeping the new race car as light as possible. The minimalistic race cage was constructed of 1.5-inch chromoly and used a lightweight aluminum roof and door skins. Unlike many of its competitors, the Pro Motorsports cage uses opening doors. They are built from chromoly and can be bolted/pinned shut for safety, but they make working inside the car so much easier. The team had learned what a pain doing anything inside a solid door cage could be, and what’s more, the Can-Am clutch belt must be changed from inside the cab instead of the rear wheel area as on a Polaris.

The custom Pro Motorsports cage relocates the radiator behind the driver, like most other race cages, but it is placed much lower for increased vision and roost protection. They opted for a larger Race Spec CBR radiator for additional coolant capacity and cooling surface area. The cage features an integrated rear bumper, and they also built lightweight chromoly nerf bars and a front bumper. The custom window nets were made in-house as well.

ERGONOMICS AND ARMOR
Inside the cab, they used a lightweight Sparco ERGO race seat. The seat not only lowers the center of gravity with its incredibly low height, it also features an unbeatable neck/head restraint when compared to the competition. The Impact harnesses feature a ratcheting style buckle system to really lock the driver to the seat. A Momo steering wheel with a quick-release eases vehicle entry, and it is connected to a 2:1 steering quickener.

Keeping comfortable and focused is key, and Matt found the floorboards a little cramped for his driving style and big feet. The brake pedal was cut and reshaped, and they even cut out and redesigned part of the floorboards for increased comfort. Braking comfort and performance were further improved with oversized 260mm BRP X-Team brake rotors. Matt also prefers to run a Parker Pumper style Impact helmet, and they use a 230 cubic-foot-per-minute pump from Rugged Radio to keep him cool and fog free. The 235 cfm pump is actually designed to flow enough for two passengers in a desert race car, but when channeled to a single helmet, it pumps an unreal amount of fresh air.

To keep the car together through the abusive WORCS season, they found very effective chassis braces from DragonFire Racing and a very lightweight yet durable skid plate from Factory UTV. The Factory UTV skid plate is made of UHMW, but they opt for the thinner version to keep weight to an absolute minimum. For rolling stock, Matt sticks with the Maxxis Bighorn 2.0s and TireBlocks that he ran on the RZR, but they opted for superlightweight Method beadlocks. The Method beadlocks are proving to be as tough as can be, and the Maxxis with TireBlock run-flat setup has won both the UTV and ATV Pro championships for the past several years.

BIG POWER AND PERFORMANCE CLUTCHING
The Maverick motor and exhaust were entrusted to Curtis Sparks Racing. Matt’s XP 1000 motor was incredibly fast, but Sparks already had insane amounts of research and development time on the Polaris. When they were able to get a completely built Can-Am motor back in time for the opening WORCS round, it was a statement in itself. The motor not only rips gnarly holeshots like they’re going out of style, but it is also proving to have typical Sparks Racing reliability. The Sparks motor features Sparks head porting, custom-spec Web Cams, and highercompression CP pistons. It breathes through a custom air intake with a K&N Filter, and the fuel/ignition map is controlled with DynoJet’s PC5 programer. Spent gasses are expelled through a Stainless Steel X-6 dual-exhaust system.

GROUND CONTROL TO MAJOR MATT
Besides a completely new machine, the biggest change to Matt’s UTV program was the suspension. While they are opting to use the stock A arms and suspension components, Matt has chosen to run Elka suspension like he does on his ATV program. The necessary UTV-sized, 2.5-inch Stage 5s are new to Elka this year, and Matt is working hand in hand with West Coast Elka tuner Doug Roll to make them perfect. The new shocks feature the same hiflow valving and lighter weight bodies/ coil springs that are winning championships on every ATV circuit. Working directly with Doug, Matt already has his Maverick performing better than any other Can-Am at the track. The suspension is not only better than other CanAms, but Matt claims it is much easier to control than his RZR was. It is more agile and just plain turns better than his previous race cars. Matt says the new
setup also flies flatter and stays incredibly controlled in G-out situations. On top of that, it has enough power to pull out of most sketchy situations.

The Elka shocks they have developed are available to the public through Elka or Doug at Roll Design. They are designed to work with a completely stock suspension setup, but suspension action was further improved by lightening the stock rear sway bar. They turned the stock one down for less resistance and a slightly more freeflowing setup.

One final trick setup on Matt’s car is the AIM logging system. The high-tech data logger uses an infrared sensor to monitor belt temperatures but also works in conjunction with a very trick Optic belt slip sensor from Precision Auto Research. The sensor actually picks up a mark on the belt and checks it against engine rpm and jackshaft rpm to constantly monitor belt slip. Using this system, they can confidently tune any clutch system, as they know exactly what’s going on.

FORMULA FOR SUCCESS
Matt Started off the season in Taft with a mediocre suspension setup and finished eighth in the Pro class. The Pro Motorsports Can-Am held up well, but they ran out of shock testing time before the opener. Determined to succeed, Matt spent the following weekends in California with Doug Roll getting the setup completely dialed in. The results landed him just shy of the top five but looking incredibly more comfortable with his new ride.

Matt showed up at his home track in Peoria, Arizona, for round three ready to go. The Pro car was ready for battle, and they were ready to debut the newly built Turbo car in the Unlimited class. Matt earned a hard-fought second to points leader Mitch Guthrie in the Unlimited class and was ready as ever for the Pro Moto. Determined to get in the top five with the Big Dogs, Matt pulled a fourth place finish only 8 seconds off the podium. With names like Guthrie, Beau Baron, Davi Haagsma, RJ Anderson and Ryan Piplic, WORCS is arguably the most competitive series in SxS racing, and Matt is working his way to the top.

On a final note, Matt’s older brother Jeff has recently found his way back into the scene as well. Jeff and Matt are teaming up for the ATV Pro class in the BITD series once again. This time they are proving unstoppable, winning both the opening round in Parker and the second round in Laughlin.