— Inside the Can-Am Race Team machines —

After five of eight rounds of the World Off-Road Championship Series (WORCS), Cody Miller leads Pro Turbo UTV defending champ Cody Bradbury by 14 points and brother Hunter Miller by 16 points. Cody has a win and three seconds in his Maxxis XPS Maverick X3 X rs Turbo R, while Bradbury won the second round and has three thirds. Each has had a bad round, while Hunter has two podiums, two fourths and a 16th. The Miller Brothers Racing WORCS X3s are almost identical, and here are the modifications they’ve made for short-course racing. Cody also won the short-course portion of the 2019 UTV World Championships in his XPS X3. 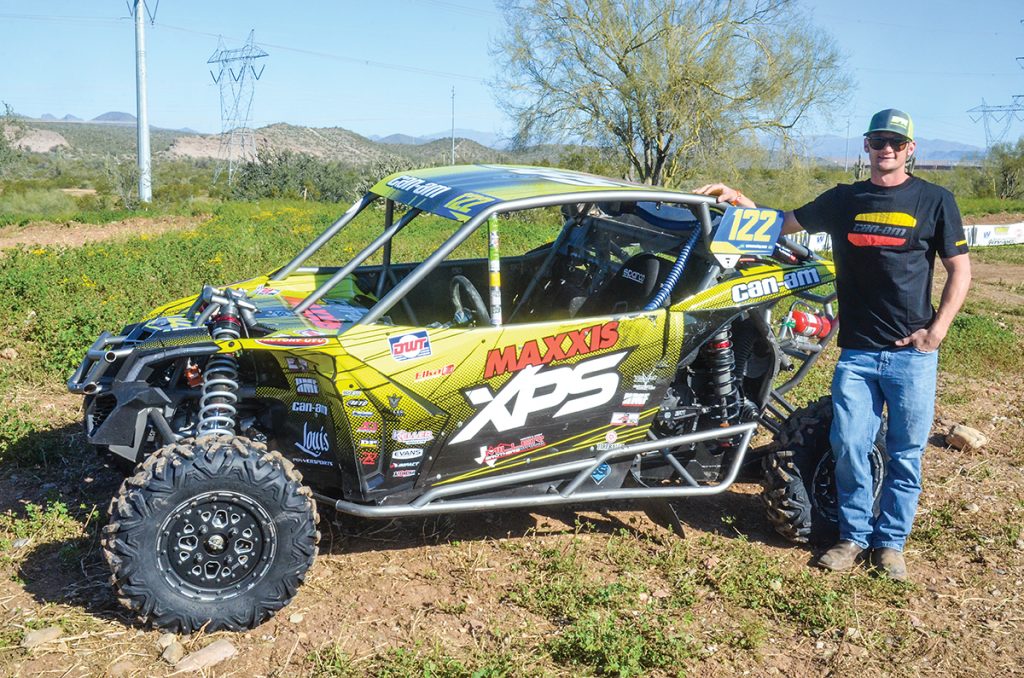 Double E’s wheel scrapers keep rocks from fouling the brakes and wheels. Miller Bros Racing also uses Keller Performance Products ball joints ($533.95), and Hess claims they are the strongest ball joints on the market with 4340 construction and a hardened body and stem. Teixeira Tech is also working on X3 suspension arms for the Millers.

Hess Motorsports’ X3 2:1 steering quickener ($650) went on both cars, and Hess also has an X3 1.5:1 steering quickener. Hess’ 6-bolt quick-release steering wheel hub is $80, and the Hess flat steering wheel is another $80. Hess also did the radiator relocate kit by CBR with three fans ($1150), the rear radius rod plate ($160), and seal protectors for the transmission and secondary clutch ($50) on both X3s.

Both X3 Turbo Rs have an Evolution Powersports ECU programming ($549–$1149) and HMF Racing Titan SS exhaust ($909.95) for holeshot power, and diagnostics are monitored by an AiM MX X3 UTV plug-and-play system. The AiM MX uses GPS and Glonass constellations to calculate lap times to 1/100ths of a second, and it monitors and displays belt temperature, oil temperature or oil pressure from the ECU. Data is also downloadable to your PC, all for $599. Hess also sells billet Can-Am X3 steering rack supports for $480. They eliminate steering slop and bump-steer.

Both the #122 and #190 X3s sport auxiliary safety fuel cells in the passenger-side floorboards and connected to upgraded OEM fuel tanks. Both X3 seats were removed, and the drivers’ seats were replaced by Sparco seats and Impact harnesses. WORCS rules also require a fire extinguisher; Hess has a 1-pound unit for $180 and a 2.5-pound unit for $225. The Millers wear Sparco fire suits and Impact helmets, and they upgrade to Antigravity batteries.