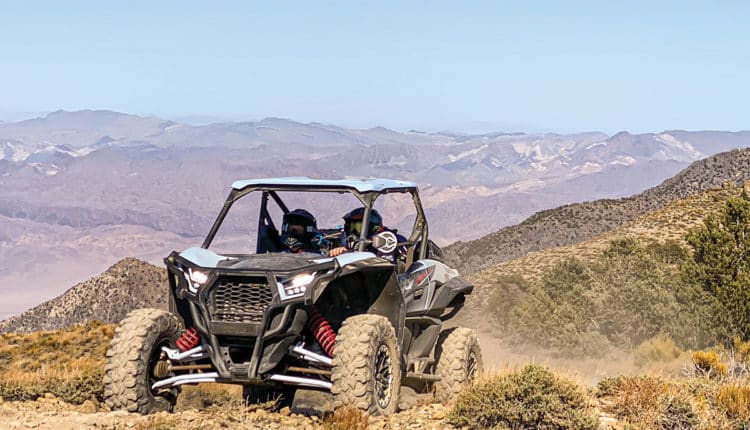 Kawasaki’s KRX 1000 quickly became one of our favorite trail machines. The amount of cockpit room, along with the smooth suspension and reliability, made it our go-to machine for longer rides. In fact, we took our 2020 test machine down the length of the Baja Peninsula twice. In all, we put 4100 miles on the machine without a single failure. It hardly had a rattle. When we say, “No failures,” we mean nothing broke on the trail. We did have some bits and pieces show some wear, and they were both in the clutch department. At about the 2500-mile mark, we started to feel two sensations. The first was an odd upshifting and downshifting. At about 6500 rpm under acceleration, the CVT system would “shift” into a higher gear. Under deceleration, we would feel a “downshift” into a lower gear at about 2500 rpm. It turns out the clutch weights were getting grooved and hanging up. Our problem was caused by the extended amount of high, steady-rpm driving we did on the long trails in Baja. We installed Right Coast Off-Road clutch weights to end the premature wear.

Being the testers we are, we left the worn clutch weights as is for more testing. Incredibly, we were able to get another 1000 miles out of the weights. In the last 1000 miles, the shifting got worse, and acceleration suffered severely. What was happening was that the weights would stick in high gear, making taking off from a dead stop almost impossible. This was bad on the belt, too. So, finally, after 3500 miles, we swapped the weights out with a $359.99 set from Right Coast Off-Road (RCOR).

Right Coast Off-Road specializes in everything KRX—basically out of necessity. With the shop and some customers racing the big green machine, RCOR quickly found out the machine’s weak links and came up with solutions. In our case, it was only the clutch issue we were concentrating on. We wanted to get rid of the shifting and belt slippage at high load and low speeds.

After letting Josh know what kind of setup (i.e., tires, weight, cargo) we were running, we ordered the kit, and he shipped it to the left coast (California). The weight/ramp kit RCOR sent out was well thought out yet simple. It contained four new, slightly wider clutch weights and a half-dozen choices of set screw weights that we could add for additional weight. Ours was shipped with a light, almost stock setup. You would want to add more weight if you were also adding horsepower. We haven’t experimented with that yet. The kit also contains a 10mm x 1.25 thread pitch bolt to expand the secondary clutch and a small cross key that is used to hold the primary clutch open when swapping the weights. You can R&R the weights with the primary clutch in the car or with it on the bench. We did the install on the bench. If we feel like tuning the clutch down the road, we will probably leave it in the car.

Other than the tools it takes to remove the cover, all you need is a pair of snap-ring pliers to remove the pivot pin holding the weight. The entire install took under 45 minutes. According to RCOR, the weights are made of a proprietary hardened metal and heat-treated. The quick fix was exactly what we were looking for. Right out of the box, we had smooth power back. The shifting sensation was completely gone. The weight ramps also cured our loss of top speed. Our Kawasaki was topping out at 62 mph before the install; now we are back up to 69 mph. Finally, at the suggestion of RCOR, we installed a G-Boost Bad Ass belt. Now, takeoff is super smooth and linear in high or low gear. According to RCOR, the stock belt is so stiff, it makes grooves in the primary sheaves. Our grooves are noticeable but not bad enough to get them machined down.

After a 500-mile test on the new Right Coast off-road weight kit and G-Boost belt, the Kawasaki is holding strong and running smooth like stock. The shifting sensation hasn’t returned, and the belt slippage is a distant memory as well. The Right Coast Off-Road weight kit is something we will probably pull out of this car when we return it so we can install it right away on our next test unit. The second you feel that unique shifting sensation, give Right Coast Off-Road a call for the fix at (919) 205-9535 and tell them UTV Action magazine sent you. You can check out their complete line of Kawasaki Teryx KRX 1000 fixes at www.rightcoastoffroad.com.

POLARIS RZR PRO R: WHAT WE CAN SAY FROM BEHIND THE SCENES OF THE HOONIGAN FILM SHOOT