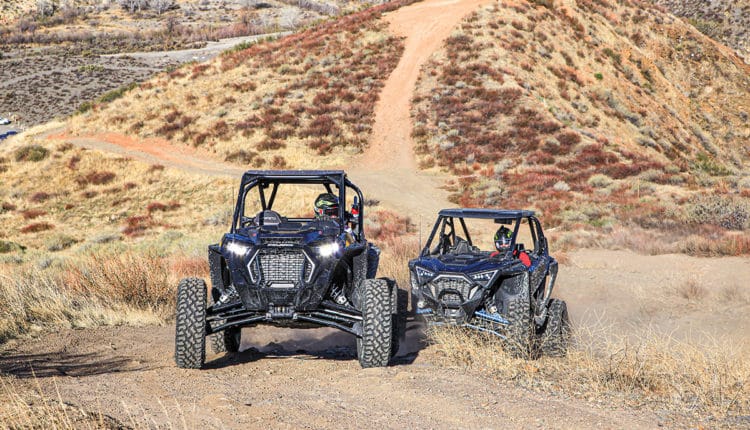 RZR XP TURBO S VS RZR PRO XP : Polaris has a stacked lineup in every category. In the turbo ranks, Polaris has three two- and four-seat models to choose from; however, the two top-of-the-line choices for most people have to be the wide, long-travel Turbo S and the new platform in the Pro XP. So, we took the two cars out for a few trail rides to get a feel for what the differences are. UTV Action’s RZR XP Turbo S vs RZR Pro XP shootout reveals how the cars compare in the following categories: cockpit comfort, power, handling and suspension. Of course, price is a factor as well, and the Turbo S starts at $22,499, while the Pro XP starts at $22,999 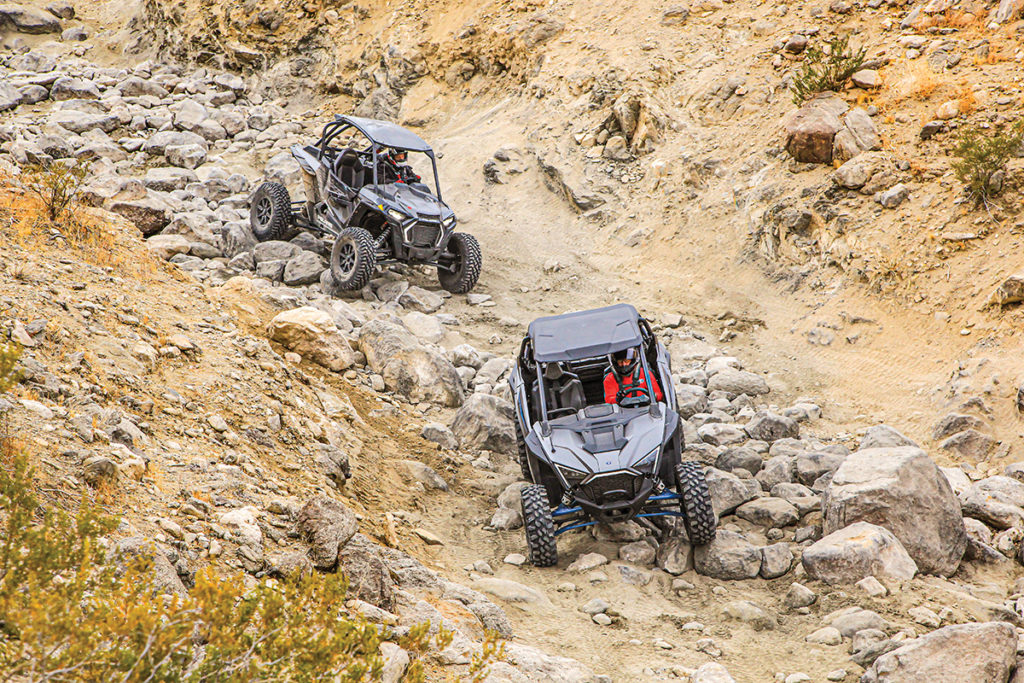 Our RZR XP Turbo S vs RZR Pro XP shootout use the Dynamix versions of both models, with the Turbo S at $28,199 and our Pro XP is an Ultimate model with a $28,499 price tag. So, price-wise, they are very similar, but what you get for the money is quite different. That’s 28,000 reasons why it’s important to see which machine is better for your intended use.

In short, the cockpit and suspension. The Pro XP has more legroom, a laid-back seating position and new dash layout. The Turbo S has a newer dash with the familiar pre-Pro XP upright seats and overall look. We do like that the Pro XP has about 2 inches more room at the driver’s knees; however, the view over the hood is not as good as in the Turbo S. You lose the ground in front of you over a foot sooner in the Pro XP; however, if you are a shorter driver, the Pro XP’s sliding seat moves closer to the steering wheel than the Turbo S’ does. That sliding seat is on rollers in the Pro XP, whereas the Turbo S is a little tougher as it’s just a slider.

Our crew liked the seating position and seat foam better in the Turbo S. Our only complaint was the lack of elbow room, because the stock door is filled with a speaker on this model. As for which cockpit is more user-friendly, the Pro XP takes the cake. There are a lot more opportunities to store things, such as gloves, snacks, phones, etc. in separate boxes. The steering wheel tilts and telescopes. It has a better grip, as does the easy-to-adjust passenger grab handle. The Pro XP still, for some reason, has a huge opening in the door. At least our Turbo S unit has full doors. Both units have Ride Command and electronically adjustable shocks. In the Pro XP, you can adjust those on the steering wheel, which is a very nice touch.

The motors are different, too, but it’s not a big-enough difference to be concerned with. Polaris claims the new Pro XP’s powerplant is more reliable and has improved clutch and turbo cooling. This might a be positive for someone racing, but for trail riding, we have never had an issue with a Polaris engine overheating or even burning belts unexpectedly. So, the jury is still out about which powerplant is better. In an 11-second drag race up to 70 mph, it was a tie every time. We did multiple runs, swapping drivers and lanes. Neither car outshone the other. While the Pro XP feels more powerful sitting behind the wheel, it feels like the Turbo S hooks up better. Under braking, the Pro XP slows down about 10 feet shorter from 70 mph. For top speed, our Pro XP has a noticeable electronic limiter preventing it from going over 86 mph. We were able to get the Turbo S up to 92 mph. It was at these speeds that we finally felt the advantages of the lower, longer chassis of the Pro XP. It’s more stable in a straight line and less twitchy around corners than the Turbo S.

As for suspension, we like what Polaris did by adding long travel to the old platform and turning it into the S model. It has beefier A-arms and frame mounting points than the original RZR. The trailing arms are wider, and the radius rods are as strong as most aftermarket components.

The Pro XP has these beefier A-arms; however, they are narrower to keep the 64-inch stance, while the S is 72 inches wide. Out back on the Pro XP, Polaris added a new C-channel trailing arm that doesn’t appear to be as strong as the first XP trailing arm. We have not seen any issues with the Pro XP trailing arms, but we are careful when slamming into corners in this car. We like the Turbo S round tube trailing arms much better.

By the numbers, the Turbo S has 19 Inches of travel up front and 21 in the back. The Pro XP has a 6-inch-longer wheelbase at 96 inches, but wheel-travel numbers are less at 17 inches in the front and 20 out back. It also has a 2-inch smaller tire than the Turbo S 32-inch ITP Coyotes. This fact also hurts its suspension action. Another number that is a big factor in how these two machines compare is the ground clearance. Polaris claims the Turbo S has 16 inches under the skid plate and the Pro XP has just a little less at 14.5 inches. 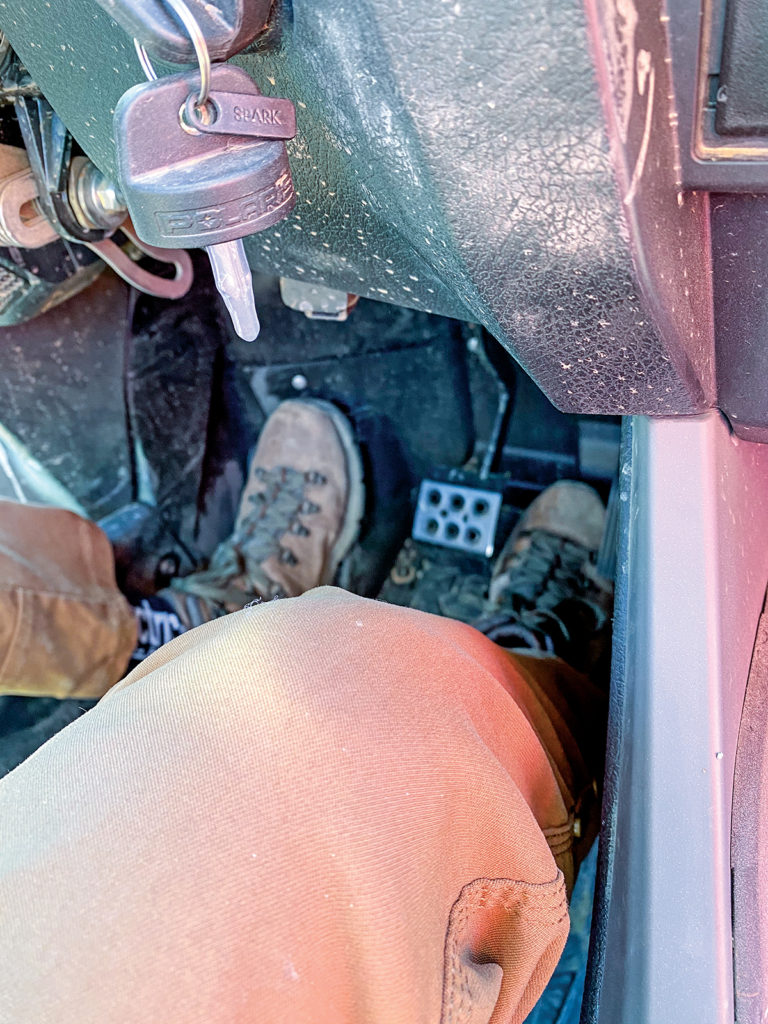 The truth is, we bottom out the rear a lot more on the Pro XP. Overall weight is 1779 pounds for the Turbo S and, surprisingly, the narrower Pro XP weighs more at 1795 pounds. In the bumps, it’s a better ride in the Turbo S by a long shot. The extra inch of wheel travel feels more like 5 inches. We could keep the Turbo S in comfort mode, and it would go through the bumps without bottoming better than the Pro XP with the Fox Dynamix suspension set on firm.

As we noted in the power section, the Pro XP’s longer, lower chassis was preferred at higher speeds. It’s more stable. The Turbo S is a little twitchy and tall-feeling above 80 mph. We feel like the Turbo S 4 has the best mix of ride height, stability and suspension of any UTV. Its wheelbase is perfect in our minds. The two-seater is not by any means a handful to drive; it just keeps you on your toes at the big end.

As for turning radius, neither is it compact, but neither one of them outperforms the other. The wider Turbo S can barely make a complete turn within a 40-foot area. It takes about 6 feet less in the Pro XP to make a full U-turn at slow speeds and without whipping the rear end around. In hard driving, the machines are very equal. The longer wheelbase of the Pro XP lets you corner just as hard as the wider Turbo S. Hook-up is better on the Turbo S, and in some situations, the car feels like it wants to wheelie. It’s that fun.

If Polaris would have put 32-inch tires on the Pro XP, we think we would like it better. If it had long travel, we know we would. The Pro XP has better cockpit features with multiple storage boxes, a better steering wheel and passenger grab handle, longer throw on the seat adjustment, and six-point seat belts instead of four. We also love the Pro XP’s 12-gallon gas tank. Power-wise, they are equal. Suspension-wise, we prefer the Turbo S hands down. It’s this category that would make us choose the 2021 Polaris RZR Turbo S over the Pro XP. So, if you care more about the new styling and cabin comforts, you wouldn’t go wrong buying the 2021 Polaris RZR Pro XP. 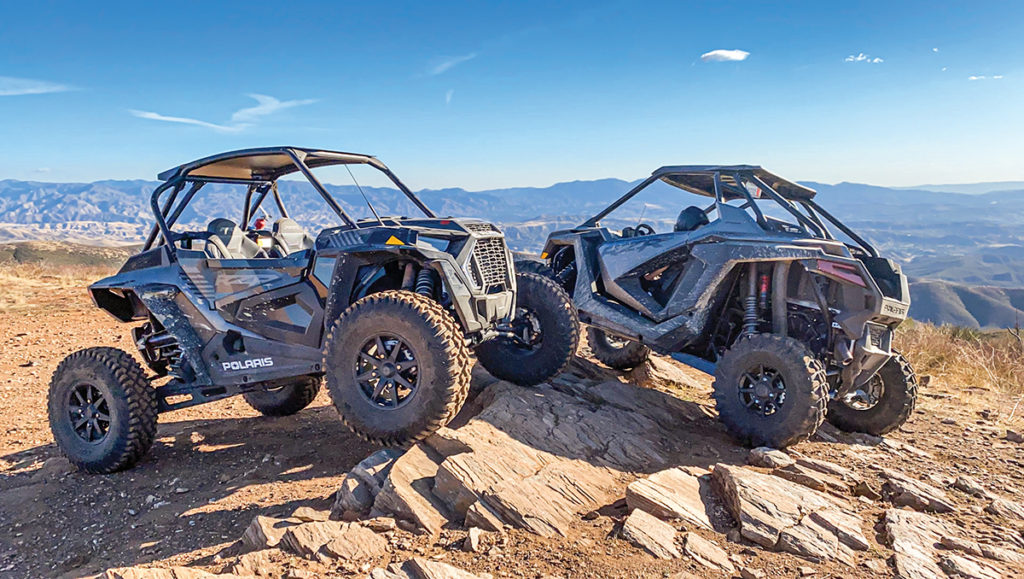 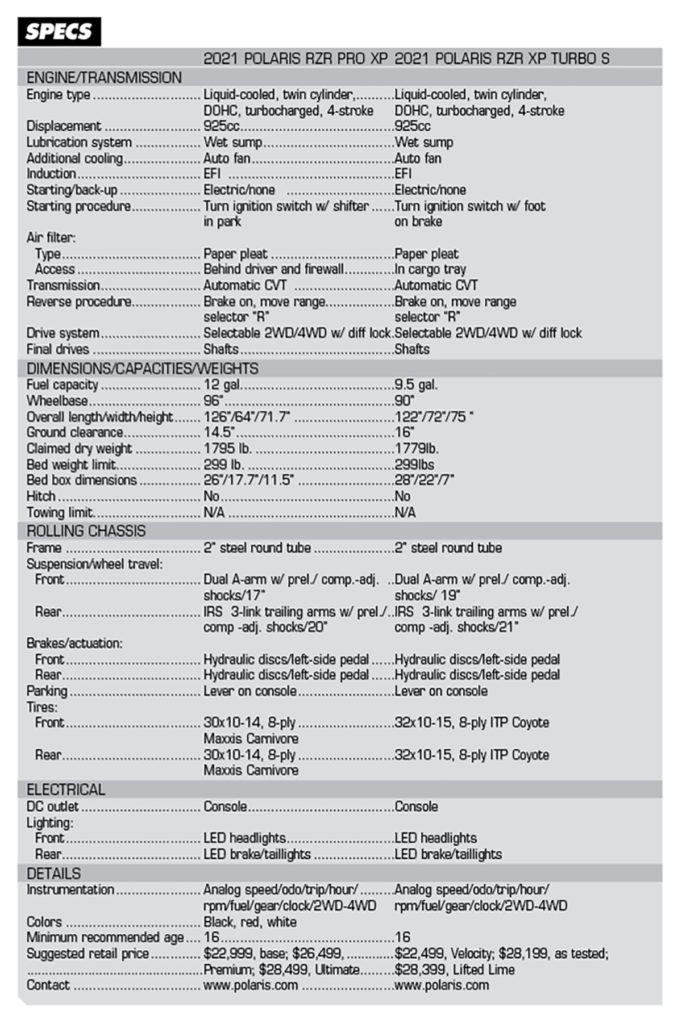