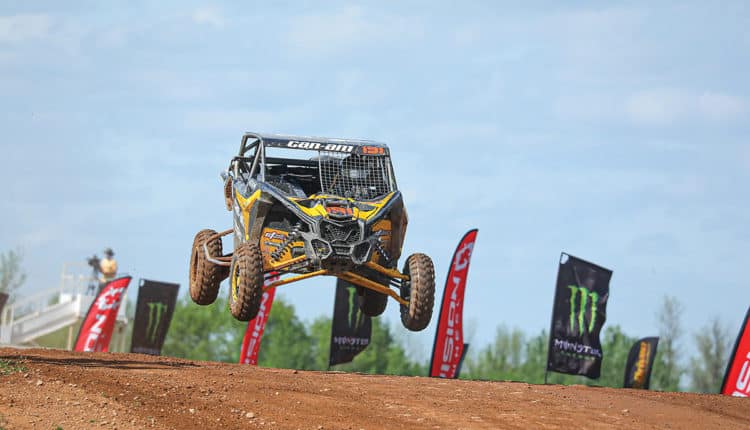 At press time, the $200,000 Texas Outlaw UTV race series joins WORCS, Best in the Desert, SCORE, King of the Hammers and the Mint 400 in announcing the 2022 schedules (see “Inside Scoop” and “Schedule”), but only one of these series has decided its 2021 championships. Kyle Chaney was the first champion of 2021 with his Can-Am King of the Hammers UTV victory over Cody Miller and Phil Blurton for an all-X3 podium; here’s to saluting the 2021 champions.

In WORCS, with three rounds to go, Beau Judge (C-A) has a 23-point lead over Cayden MacCachren (Pol) in Production Turbos, while MacCachren has 17 points on defending champ Beau Baron in Pro Stock UTVs. Former WORCS champ Ryan Piplic (Pol) leads the BiTD Pro Turbo UTVs by one point over Dustin Jones (C-A), 511-510, with Mitch Guthrie Jr. another five points back with one round to go.

In Champ Pro Mods, Andrew Carlson fired off the first-round win for Polaris, but then Kyle Chaney (C-A), Rodney and Owen VanEpren (Yam) each won a round. Carlson would go on to win four more rounds, but Owen would win another round and ultimately win the Pro Mod title with consistency. With the $10,000 bLU cRU bonus, Owen VanEpren will be the defending Pro Mod champion for 2022.

Next, SxS Sports crowned its King of the Elements champions after three rounds of ice and dirt short-course racing. With two Pro Mod wins, Kyle Chaney won the championship for Can-Am. There were three different winners in Pro Stocks, with Owen VanEpren winning the last round and his second championship of the year, which is worth $12,500 in bLU rRU bonuses.

Two state championship series stepped up big time in 2021 with the $200,000 Texas Outlaw UTV race series and the $210,000 MidAmerica Outdoors UTV race series in Oklahoma. With three rounds to go in the next month, Cody Miller leads brother Hunter in Pro Turbo points, 189-162, after Cody’s five wins and Hunter’s two. Ronnie Anderson won the other round for Polaris, and he leads in Pro NA 1000 points over teenage sensation Kainan Baker, 170-167. Baker has won four and Anderson two, with defending champ Collin Truett (Pol) and Cross Kirchmeier (Hon) each winning a round.

In MAO racing, Kainan Baker leads Eli Biescke (Yam) by 20 points in Pro NA 1000s, 270-250, with Baker winning four and Bieschke winning one round. With three straight Pro Turbo wins in the last three rounds, Nathan Wolff (C-A) has tied Devin Young (Yam) in points with 136 each, but Wolff has one more win than Young. Scottie Lawrence is five points back with 50 points on the line in the remaining rounds.

In Ultra4 UTV racing, there are three regional series, and Chaney and Anderson have won a round each, but Jamie McCoy (C-A) won all three eastern rounds for the championship. Chris Blais (C-A) has won four of five rounds and clinched the DP4 Racing Pro UTV title with a round left. In Indiana X-Country racing, Mitch Wofford (Pol) leads the Single Pro class with one round to go after four class and three overall wins.

Here’s to all you champions and a great 2021 racing season. Saluting the 2021 champions and seeing them in action has been great! I’m stoked for 2022!