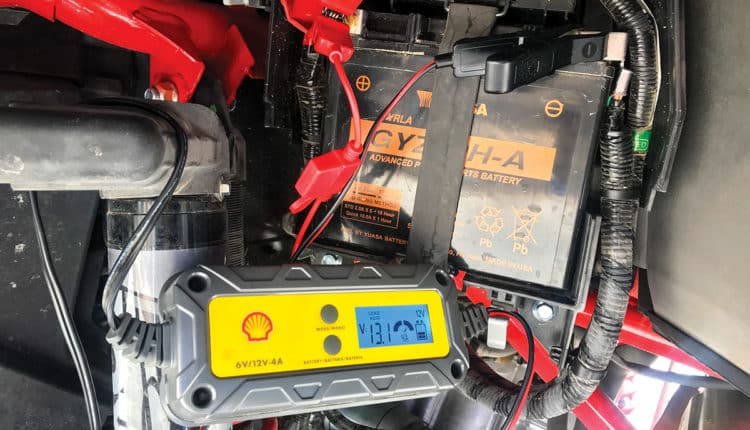 WHAT IT IS: SHELL SBC400 BATTERY CHARGER

Shell has been fueling our sport since its inception, and now it wants to charge our powersports batteries with a couple of new chargers and maintainers. We chose the Shell SBC400 battery charger and maintainer, which charges all types of lead-acid, AGM, and lithium-ion 12- and 6-volt batteries with 4-amp fast and 1-amp slow modes.

The SBC400 comes with both a 24-inch fused cable with eyelet terminals for attaching to your ride’s battery and a 27-inch cable with clamps and 7.5-amp fuse for charging other batteries. The charger takes 120-volt AC input via a 70-inch cable and emits 6-/12-volt DC output via a 59-inch cable with quick-connect. The charger body is 6.76 x 3.06 x 1.54 inches, so it fits in most UTV glove boxes. Capacity is 2–120 Ah, and it has 11-step charging cycles, including auto self-repair for damaged, stratified, or sulfated batteries. It also features seven levels of protection and smart detection.

Designed for lead-acid, including wet, gel, MF, VRIA, EFB and AGM, plus Li-ion batteries, the plastic charger is all-weather (IP65 waterproof) with LCD readout. Since it’s a charger and maintainer and not a jumper-starter, clamps aren’t as heavy-duty as Antigravity jumper clamps. The body has mounting holes at all four corners, and the read-out includes 12 icons for bad battery, AGM, Li-ion, 6 volt, 12 volt, amp output, battery charge level, voltage, and amp setting and output.

Any UTV owner that wants the UTV to start when needed, no matter how long it has been since last started.

We charged several UTV, dirt bike and motorcycle batteries, and tried to charge a pickup battery, but it was beyond repair. The bad battery icon came on instantly, but we left it overnight hoping the ABC400 could do magic. It couldn’t. Next, we charged a totally dead KLX450R AGM battery, and it went into AS mode to repair it before slow-charging it overnight on a 1-amp setting. The battery is like new and cranks over the KLX easily. Next we installed the eyelet cable on a 1997 Harley and fast-charged it overnight on 4-amp mode. By morning it cranked over like new. Next, we used the clamp cable on a Talon X-4 that would barely crank over, also on 4-amp fast mode. The Talon has a 20-Amp AGM, and the SBC400 went into Bulk Charge 1 mode with 4-amp constant current to 75 percent. Bulk 2 applies 3-amp current to 80 percent, then Bulk 3 applies 2 and down to 1 amp to 85 percent. When fully charged, it displays FL icon and goes into analysis mode.

The Shell SBC400 is a versatile and handy charger and maintainer for the shop or toolbox. Its seven protection levels include reverse-polarity, over-charging, over-voltage, short circuit, over-current, over-temperature and defective battery. MSRP is $54.99 at Costco and on Amazon, but we have found it for $49.99. It has a five-year limited warranty, so it should pay for itself over its lifetime by reconditioning damaged batteries and saving UTV rides.

How to Buy a Cheap Used UTV: Step-by-step Guide for Students?