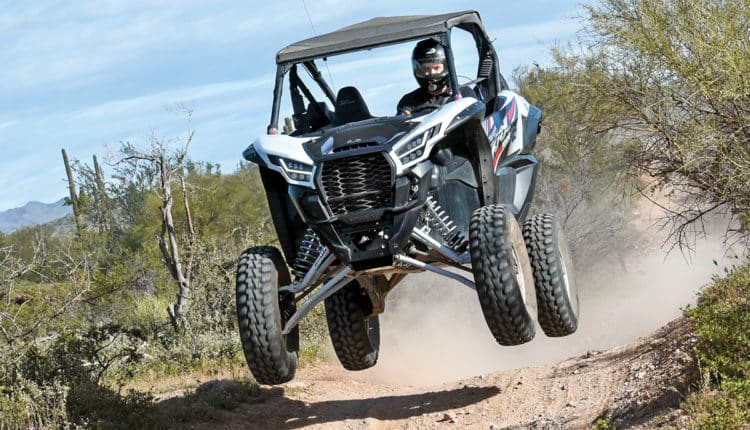 For those not familiar with Shock Therapy (ST), it is run by a bunch of desert racers in Arizona who tuned trophy truck and buggy shocks back in the day. When teams started pre-running with and then racing UTVs, Shock Therapy converted its Arizona operation to a full-fledged UTV suspension tuning business with many patents on shock components, cross-over rings, travel limiters, torsion bars and linkages. Shock Therapy is based in Phoenix and has a permanent location at Glamis’ vendor row and in Ensenada, Mexico. Last month we reported on ST’s many suspension upgrades for Honda Talons, and this month we test Shock Therapy KRX 1000 mods including the Dual-Rate Spring (DRS) kit, Ride Improvement System (RIS) valving and shock mods, and iQS (intelligent quick-adjust system).

Whenever a manufacturer introduces a new model, Shock Therapy buys one and extensively tests it in Arizona, Baja and the dunes. They then come up with a strategy to develop products and services to improve the machine for duning, racing and adventure. Test drivers bottomed the KRX in the dunes (even with the clickers fully closed) and experienced bucking on trophy-truck whoops. Shock Therapy is also developing torsion bars, links and travel-limit kits.

The ST DRS kit uses the stock KRX cross-over rings and collars but replaces the primary and secondary springs with new rates; kits include dividers. They use Eibach or ST springs on the $650 DRS kit. RIS for the KRX includes freeing up piston flow and completely redoing valving for a more progressive shock stroke. RIS also includes Schrader valves on the reservoirs.

IQS totally replaces the KRX mechanical LSC compression adjusters with Fox Live Valve electronic adjusters for the 2.5 Fox Podium shocks. The iQS lets the driver adjust ride quality and bottoming control on the fly with a three-position switch—Soft, Medium and Hard. Currently, this switch rides on the dash, but a steering wheel with a switch is in the works. The Fox/ST iQS is not interactive like Polaris’ Dynamix and the Honda Talon’s Live Valve with complex sensors; it simply adjusts the Live Valves on all four corners according to the driver’s commands. It is also expandable, so drivers will be able to adjust iQS via Bluetooth on their phone. ST iQS is only available on 2.5 or 3.0 Fox shocks.

All of ST’s shock springs are made out of proprietary high-quality CrSi materials so they won’t sack, fade or break. RIS valve shims are also of the highest quality available for durability and no-fade longevity. ST KRX 1000 iQS kits include four motorized Live Valve base valves, a Bosch ECU, an automotive-grade wiring harness with locking connectors and plastic shielding, a rocker switch, mounting instructions and hardware, and iQS die-cut decals. The Live Valve valves have potentiometers that open up or close down shock-oil flow between the reservoirs and shock bodies, and they have a wider range of adjustment than with QS3, RC2, LSC and Race Series valves. The aluminum-cased ECU is rated to IP67 standards, and the Live Valves are also weatherproof. On the Teryx KRX, the front Live Valves protrude through the hood, so ST is developing billet covers.

We first tested ST’s KRX 1000 DRS and RIS at Boulders OHV area north of Phoenix. Ride quality on desert chop is greatly improved, bottoming is eliminated, and the ride over deep desert whoops is more level. ST develops and tests its valving with the adjusters at full soft, so owners can dial in more damping for higher speeds or dunes. The ST KRX doesn’t do anything weird when getting air, either.

Next, we returned to Boulders for rock crawling, high-speed sand washes and whoops with the KRX iQS system installed. Ride quality and bottoming resistance were as impressive as with the initial DRS/RIS test with the rocker switch on the Soft setting. Toggling to Medium and Hard for the big desert whoops took away some of the ride quality while greatly increasing trail speeds and fighting bottoming.

While Kawasaki did a really good job with OEM spring and damping rates on the KRX 1000, Shock Therapy makes a night-and-day difference with its DRS and RIS KRX mods. Ride quality and control are greatly improved, as bucking and bottoming are greatly reduced; greater trail speeds are the result. Add the on-the-fly adjustability of the iQS system and you gain even more versatility. Go full Soft for cruising or to Medium for sand highways. Hit Hard for dunes or racing. The iQS also flattens body roll in turns on Medium and Hard; it’s like an e-torsion bar, which is also in the works. With the suspension dialed, now we want more power from the KRX for even greater speeds.