When Kawasaki introduced the Teryx4 800 FI for 2012, its only sport-UTV competition was the 60-inch RZR 4 800, and quickly following, the aftermarket produced long-travel kits for racing the T4. Our favorite Moab mount has long been the HCR Teryx4, but the four-seat Turbo and other extreme-performance UTVs give consumers a lot more choices these days. For 2018, Yamaha enters the sport-recreation four-seat UTV market with the Wolverine X4, which was designed mostly for tight East Coast and rocky mountain trails and aimed directly at the Teryx4 (and Honda Pioneers). So, which is better? To find out, we took the 2018 Kawasaki Teryx4 LE and Yamaha Wolverine X4 SE to our favorite mountain trails and unleashed the beasts.

For 2018, Teryx4s get new color choices—Bright White for base T4s and new Candy Plasma Blue and Matrix Camo Gray for Limited Editions. All Teryx 800s got a $750 price reduction. We first tested the Limited Edition in April 2018.

Brand new for 2018, the Wolverine X4 was first tested in the January 2018 issue. We followed up with a long-term test of the Special Edition in July 2018 and modified the X4 CVT in September for 27-inch tires. The Teryx4 LE comes with 27-inch Bighorn 2.0 tires, so we fitted the X4 SE with like-sized rubber for this comparison. Otherwise, the new Wolverine X4 SE and Teryx4 LE are stone stock for this real-world comparison.

WHICH IS THE FASTER TWIN?

Neither, but the Kawasaki is quicker. Both have rev limiters that kick in at 50 mph in high, so both top out at 50–51 mph (maybe 52 on a downhill). We got 31 mph out of the Teryx4 and 29 mph out of the X4 in low at about 2800 feet  of elevation. The 783cc Teryx V-twin is tuned for torque, and the throttle map is a little more aggressive, making the shorter-stroke Teryx4 more peppy and fun on the trail. Yamaha’s new 847cc inline twin has a comparatively longer stroke (80.2mm versus 69mm) and is also tuned for bottom-end to midrange power and torque, but Yamaha also designed the Wolverine X4 with a very large-volume intake tract for quiet running. With that and the tuning for the YCC-T fly-by-wire throttle mapping, the larger-displacement Yamaha accelerates slower than the Kawasaki. One test driver said, “It’s like the Teryx has a quarter-turn [dirt bike] throttle and the Wolverine has a half-turn throttle.” The tie-breaker goes to Kawasaki, although the X4 high-altitude CVT kit with the OEM 26-inch Bighorns does improve acceleration for more sport-minded drivers.

WHICH HAS BETTER CVT/4X4 DELIVERY?

Also a dead heat. Both get the job done, with a dial on the dash instantly selecting 2WD, 4WD or 4WD diff-lock via servos. Both have a large CVT with a centrifugal clutch applying constant belt tension and a four-wheel engine-braking system. Both have a gated range selector and slick selection, and both are very effective in gnarly 4×4 terrain. Yamaha pulls ahead with all of the extras designed to lower vibration and noise in the cabin, including gear-driven counterbalancers, low-rpm shifting and special-cut helical and spiral gears in the transmission and rear transfer case. The X4 gets the job done more quietly and has a slicker range selector. Also, when the X4’s grey key limits top speed to 25 mph, full power is available for climbing steep, gnarly hills.

WHICH HAS BETTER HANDLING?

Yamaha. With almost 3 inches less wheelbase (82.7 versus 85.6 inches), the Wolverine X4 is a little more agile and easier to bend around mountain switchbacks. The Teryx4 is 1.8 inches wider and has a front torsion bar to fight body roll in turns, so it can be thrown into corners a bit more aggressively before bicycling. It is also agile in turns, aided by the sporty power delivery on exits. Tunable Teryx shocks also give the Kawasaki an edge on faster, whooped-out trails, but, in most slow-speed situations, the Yamaha is more agile and sure-footed. EPS assist is tuned very well for agile turning as well. It also has only a front torsion bar to fight body roll, but Yamaha worked very hard on a low center of gravity via a dry-sump motor with offset cylinders and mid-chassis placement for centralized mass. We did notice a slight top-heavy feel in turns with the X4’s rear stadium seats loaded.

Both have strong points. The new Wolverine X4 has slightly more travel—8.7 inches in the front and 8.9 in the rear—and the rear shocks are self-leveling for every load. The X4 delivers a plusher ride at slower speeds, but the only adjustments are front preload. The self-leveling rear shocks have sturdy 22mm shafts and progressive springs. The Teryx4 has 8.0 inches of front and 8.3 inches of rear travel with Fox Podium 2.0 piggyback shocks sporting 24 clicks of compression adjustment. They’re set at 12 clicks out, so drivers can back way off for plushness on rocks, roots and ruts, or stiffen compression for faster conditions and/or a loaded bed and rear seats. Knobs on the reservoirs make adjustment easy, but the driver has to keep track of settings, while the Yamaha makes rear-shock adjustments automatically. The Teryx4 has better suspension for control at higher speeds, but the Yamaha has better slow-speed ride quality. We set the tires on both at 10 psi for plushness in this comparison.

WHAT ABOUT ROCKS AND MUD?

Both excel in rocks and muddy conditions. With the accessory 27-inch tires, the Yamaha has the same ground clearance as the Kawasaki at 11.2 inches, but it clears rocks the Teryx4 doesn’t on rocky trails. Both have great mud manners, with half doors and over-fenders keeping flung mud out of the cabin, and both have great torque for powering through goo.

WHO HAS BETTER BRAKES?

Yamaha. Four-wheel disc brakes slow the X4 in a hurry, with each front caliper sporting two 32mm pistons and each rear caliper sporting two 27mm pistons. The rotors are 207mm in diameter. Also, the X4 has more engine braking for a nice, slow pace in low. The Teryx4 also has twin-piston front hydraulic calipers, but the rear brakes are wet multi-disc in the rear transfer case. We overheated and lost the Teryx4 brakes coming down the mountains above Bishop, California, and had to stop to let them cool. 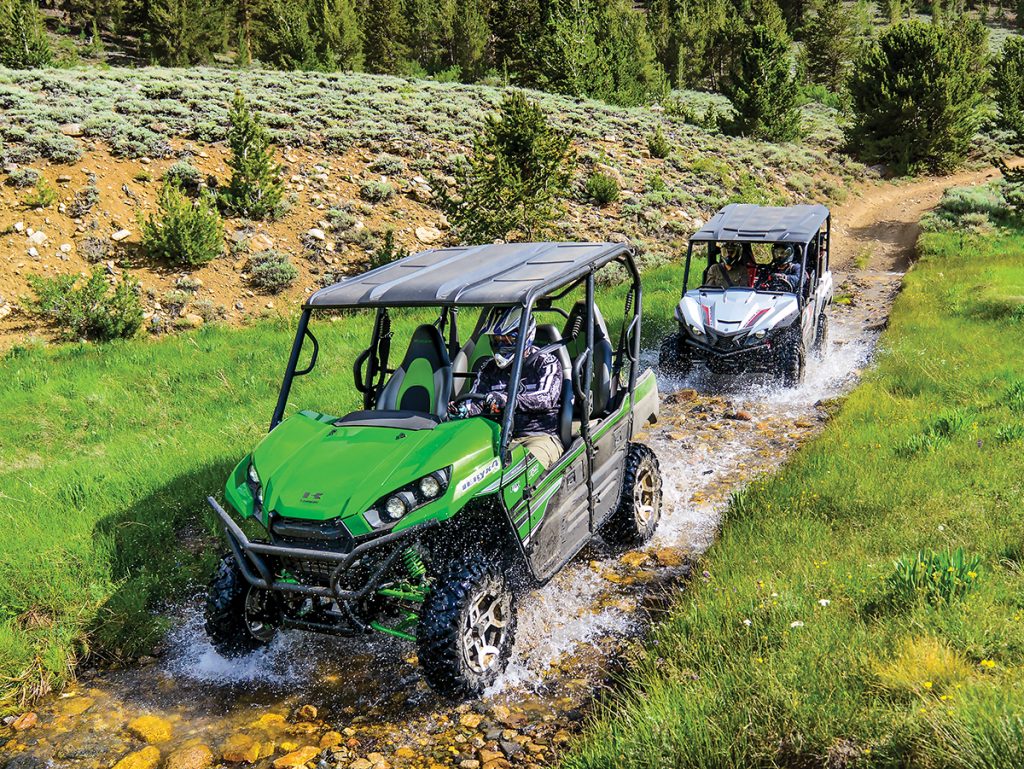 WHAT ABOUT CREATURE COMFORTS?

Both have strong points. The Kawasaki has more comfortable and secure seats, and taller riders like the legroom in front on the Teryx4. Smaller shoulder bolsters make it easier to get in and out of the Kawasaki, front and rear. Yamaha’s shoulder bolsters are larger and have plastic covers, making it harder to get in and out of the X4. Once inside, however, the Yamaha bolsters are more comfortable to lean against than the Kawasaki’s padded-tube bolsters. The Yamaha has more legroom for rear passengers, despite the well-insulated engine cover limiting “man spread.” Taller passengers have more fore/aft legroom in the X4, whereas they knee the front seats in the T4. The X4’s engine cover is so well-insulated, engine heat didn’t warm our water bottles on 100-degree days in the desert. On the other hand, the Teryx4 engine cover transfers heat to the driver’s leg and front drink holders.

The X4 has four rear drink holders and two up front, and the padded passenger bars are more comfortable than the Teryx4 handholds. The front passenger has a padded and adjustable grab bar in the X4, while the T4 has the old-school console upright with motorcycle grip and an unpadded loop on the cage upright. Rear passengers hold a thick, unpadded horizontal tube on the T4 and a smaller tube with pads on the X4. The Teryx4 also has a thick, over-molded steering wheel that isn’t as comfortable or as flex-free as the X4 steering wheel. The Yamaha has much less engine noise and vibration in the cabin, and the CVT and drivetrain don’t whine like on the Teryx4, so it’s easier to hold conversations. Add slow-speed ride quality, and the X4 is more comfortable on the trail.

Both have nice, protective roofs that channel water away from occupants. The bed of the Teryx4 holds 249 pounds of cargo, even with four people aboard. The X4 will hold up to 600 pounds of cargo, but only with the rear seats stowed forward. With four riders, storage is minimal in the X4. For one long ride, we had a large Camp Chef cooler in the T4 and stowed one seat forward in the X4, so we could carry two 27-inch spare tires and three people. With four people in the X4, you need a tailgate-down bed extender. Yamaha has an accessory X4 cargo box ($349.99) that replaces the tailgate and has a 3.8-cubic-foot (28-gallon) capacity; it accepts Yamaha’s UTV/ATV Soft Side cooler ($79.99).

In a world where four-seat turbos have wheelbases up to 135 inches, the Teryx4 and Wolverine X4 have total lengths way less than that. Both the Kawasaki and Yamaha are very agile and compact for tackling tight trails and going where four-seat Turbos can’t. The Teryx4 has strong points, including more aggressive power, comfortable seats, adjustable shocks and storage—and aftermarket support can’t be overlooked. But, the new Wolverine X4 has better handling, more legroom for the back seats, less cabin noise and vibration, better brakes and EBS, and self-adjusting rear shocks. It’s aimed at exploring East Coast tight trails, but it’s very effective and popular out west and all points in between. We pick the more quiet and agile Yamaha. 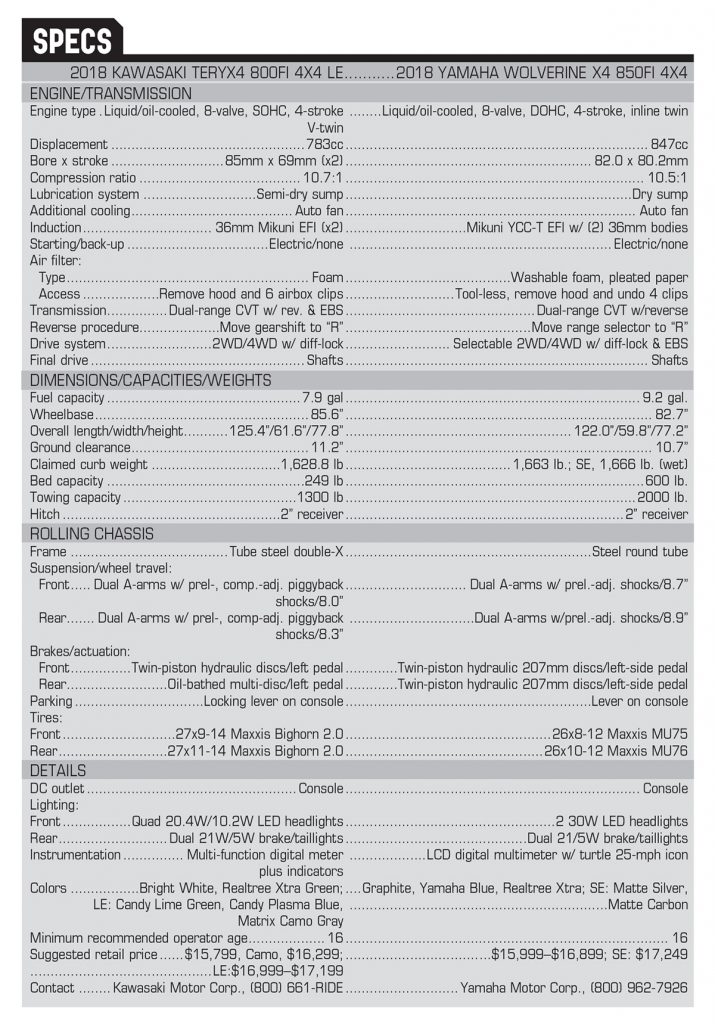 CAMP RZR IS HEADING BACK TO GLAMIS OCT 25-26TH