DUNING WITH THE ASA 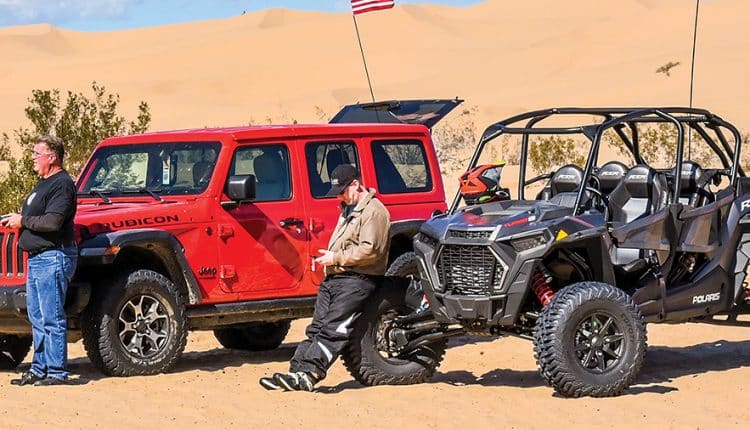 I’ve been going to the Imperial Sand Dunes Recreation Area (ISDRA), also known as Glamis, for some 33 years now. This huge dune system is America’s biggest, and I’ve had many great times there. The beauty is breathtaking, and the huge bowls are a blast to ride, whether on four wheels, or three or two.

The first time I went to the ISDRA, while playing around in the small dunes by the Glamis store, I saw a kid being ridden out of the dunes on a three-wheeler, and both of his wrists looked like Zs. He had ridden into a hole known as a Witch’s Eye and severely broken both wrists. It was a sobering reminder that the dunes may be beautiful, but they’re also beasts if you mess up in the slightest.

Although I’ve been careful and wary in the dunes, I messed up and missed a turn while night riding with friends after 13 successful years of duning. I flew off of a steep dune, and upon landing, the CR500R endoed. It leapt into the air and landed on my back, breaking ribs and compressing two vertebrae. It was my mistake, a big and painful one. Since returning to ATV Action and now UTV Action magazine from Dirt Bike magazine, I subscribe to the adage “with age comes the cage,” so I’m not going to be landed on by my machine again. With a UTV, I suppose it’s possible if you flip while not belted in, but I always buckle up for safety, especially in the dunes.

While I don’t ride dirt bikes in the dunes anymore, I have fond memories of epic rides in the dunes. Once, a rainstorm whipped through while we were eating pizza at the Glamis Store. The ride back to camp on Gecko Road was epic. Moisture bonded the sand into perfect dirt, and I carved arcs like a downhill skier all the way. It was awesome.

My latest trip to Glamis was to assist “Winkle Wally,” the motorsports maniac, as he and Leo taped an American Sand Sports dune safety video with ASA president Bryan Henry. Henry is a lifelong dune enthusiast, and he rode with me in the Polaris RZR Turbo S Velocity Edition tested in this issue. Bryan had some great tips on dune safety, and the G2G Productions crew masterfully got his knowledge on tape.

Unfortunately, Wally didn’t follow the rules about never duning alone and using a global positioning system (GPS) unit or app on his phone. We were camping on Wash Seven, and we were going to Oldsmobile Hill. I’ve always been led in the dunes by an experienced duner, and I’ve never cut a path straight from Wash Seven to Oldsmobile; we always went north to the small dunes by Sand Highway and then west, making a left (south) to Oldsmobile. Or, we went south to the larger dunes and followed established trails to Oldsmobile. Wally said he was going to take the road (78) to the Y at Sand Highway, so we split up. Instead, he and Leo jumped in the Jeep CJ7 and headed straight across to Oldsmobile Hill.

Then he got lost, and then stuck.

Where he was stuck was no man’s land, and he didn’t know where he was or how we could locate him. Several calls later and texts pinging their location, Bryan was able to find the wayward video crew. Fortunately, the Jeep wasn’t buried too badly, and we dug and pushed him back on top of the wet dune sand. Then we guided the Jeep to Oldsmobile via the more established and safer route. With the Turbo S4 Velocity being much faster in the dunes, we would have to occasionally stop and wait until we saw the Jeep’s safety flag flapping in the wind and topping a dune.

It reminded me of Australia’s Simpson Dunes, which are nothing like Glamis. Simpson Dunes are more like 300-foot waves stretching across the midsection of the outback—but for almost two days. I was covering the 1993 Australian Safari, a two-week race from Sydney to Ayer’s Rock and then north to Darwin. For almost two days the turbo-diesel Toyota Land Cruiser climbed the dunes, often towing a race vehicle. Thankfully, we weren’t swallowed up by a Witch’s Eye on the leeward side of the huge dunes.

While our UTVs, buggies and Trophy Trucks have a roll cage and seat belts or safety harnesses, the dunes can be dangerous, even on four wheels and surrounded with chromoly steel. At this year’s Dakar Rallye in Peru’s gigantic dunes, Stefan Peterhansel (Messier Dakar) hit a dune too fast and compressed his navigator’s back, much like that CR500R did mine.

While we all have a competitive spirit and a lead foot in the heat of battle, it pays to never go 100 percent in the dunes. And, passing the leader of your group is never a good idea. Play it safe and return to camp unscathed, and every ride will be a fun one. To see the ASA dune safety video or tips on safe duning, visit www.americansandassociation.org or call (888) 540-7263. Yearly ASA memberships are only $25, and the ASA fights in Imperial Valley, Sacramento and Washington DC to keep our dunes open.

Have fun, and ride safe!

WHERE TO RIDE & RACE YOUR UTV