WHERE TO RIDE IN UTAH

— The state of sideways —

Dirt Bike magazine editor Ron Lawson once completed an amateur-special, alpine-mountain stage of the Tour de France bicycle race and wrote, “The scenery was breathtaking, but I had no breath to take.”

Utah’s majestic mountains and red-rock formations are like that, but if you experience them in a UTV, you’ll have plenty of breath to take. I got to experience northeast Utah’s Uinta Mountains during a fall snowstorm in the new Can-Am Maverick Trail 800 and 1000 last year, and it was a blast getting sideways in “The State of Sport.” And, yes, the high-altitude scenery was breathtaking. The Uinta Mountains are the only American range that run east-west.

Over the past few years I’ve driven to Utah for jamborees and press events five or more times a year, and each time I discover something new that makes me want to come back even more. The OHV-friendly state built the 238-plus-mile Paiute Trail to connect 2000 miles of Forest Service roads and 800 miles of OHV trails, and the Paiute trail system now hosts three of Utah’s 10 yearly UTV/ATV jamborees.

Paiute-hosted jamborees include the National ATV Jam at Fillmore on June 19–23, and many rides also accommodate UTVs. On August 8–11, Marysvale hosts the Paiute Trail Jam for UTVs and ATVs, with rides going up to 11,000 feet in elevation where pronghorn sheep frolic above timberline. We’ve been every year and especially enjoy the UTV competitions and theme rides. The Rocky Mountain ATV/UTV Jamboree is the biggest Paiute Trail rally, and it takes place September 17–21 out of Richfield. 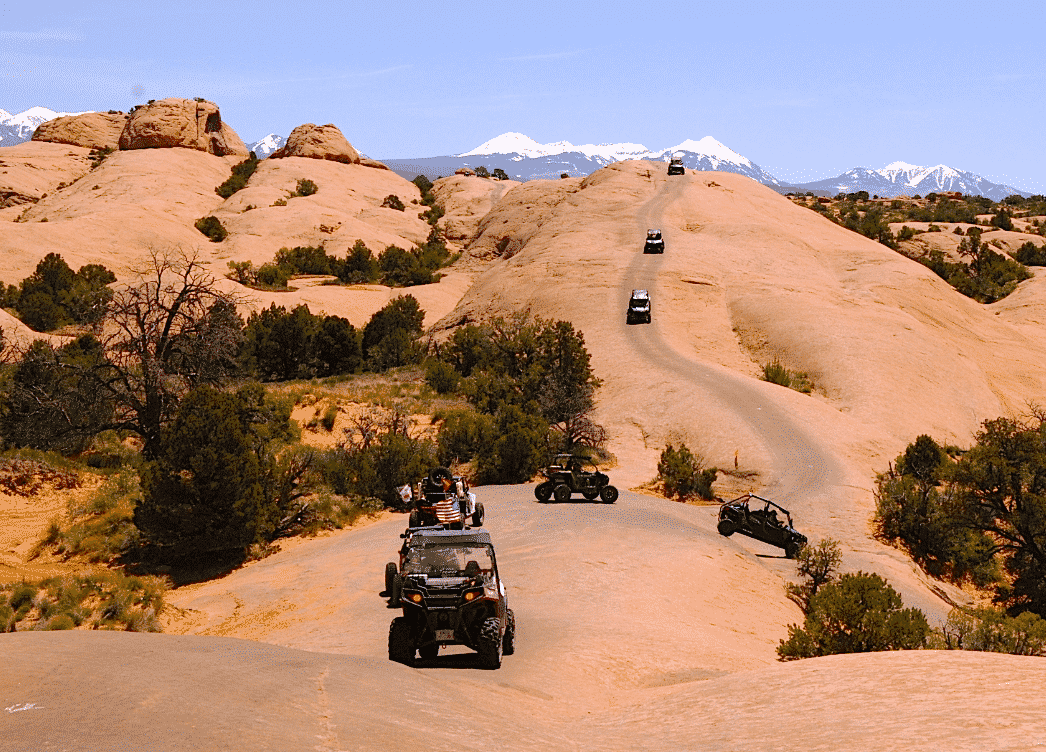 Utah also has other trail systems and OHV opportunities outside of the centralized Paiute Trail. Moab—the location for dozens of movies, like Thelma and Louise, The Lone Ranger and Star Trek—hosts the Discount Tire Rally on the Rocks (ROTR), and we’ve been to this very popular UTV festival every year but one. This year’s dates are May 15–19, and Moab is surrounded by two of Utah’s five national parks—Arches and Canyonlands, with the others being Bryce Canyon, Capital Reef and Zion national parks. Moab is a Motorsports Mecca that is surrounded by trails, and the five-day ROTR has 13–16 daily guided rides on trails rated from easy (Kane Creek, Chicken Corners, 3-D, Dome Plateau, Jackson Hole) to moderate (10 trails/rides) to advanced (12 with names like Steel Bender, Metal Masher, Poison Spider and Area BFE). We especially like Behind the Rocks, because it has spectacular scenery and many trail conditions and obstacles. Getting sideways in sand-worm turns through the Terracotta Warriors is big fun, and so are the small dunes at the end. 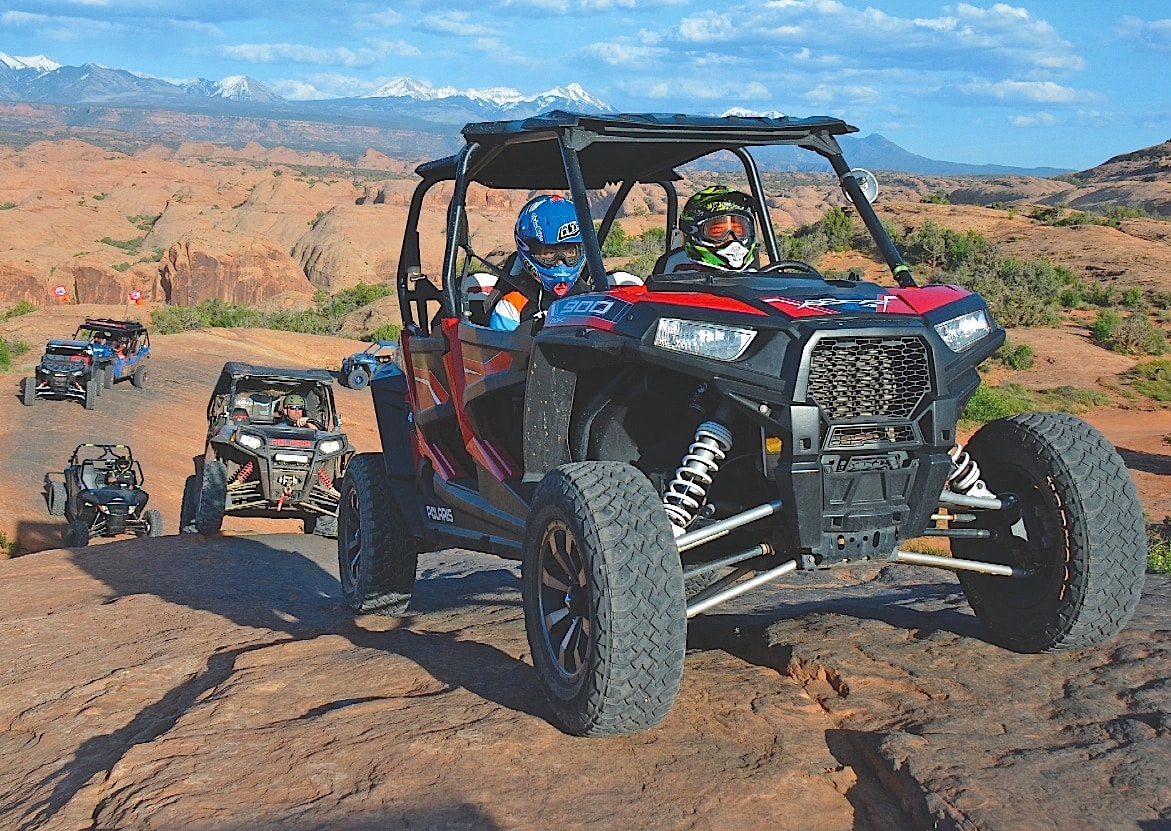 There are also several UTV, ATV, dirt bike, and mountain bike rental and tour companies in Moab, so one could fly into the Moab regional airport, check into the hotel, condo or cabin and rent a Wildcat, Rhino, Wolverine, YXZ, RZR, Ranger or Maverick for the ROTR. Or, attend the ROTR and demo-drive a Can-Am, Cub Cadet, Textron Off-Road UTV and/or Yamaha. Try it before you buy it! Moab is so beautiful and the trails are so challenging that we’ve been invited there to experience the Arctic Cat 550 and 700 ATVs, John Deere RSX850i Gator (while the Lone Ranger was being shot) and the Textron Stampede 900. If you have a UTV bucket list, Moab and the ROTR should be on it.

Besides Paiute Trail and Moab’s rock-ride wonderland, Utah also boasts the Sand Hollow State Park (SHSP), which is at the southern border of Zion National Park. The SHSP hosts the yearly Tri-State ATV Jamboree, held this year on March 14–17, and the SxS Adventure Rally, which will be held November 8–10. Moab’s ROTR and SHSP’s Adventure Rally are promoted by Lanse Chournos and WORCS founder Sean Reddish, and their jamborees are two of Utah’s four finest. 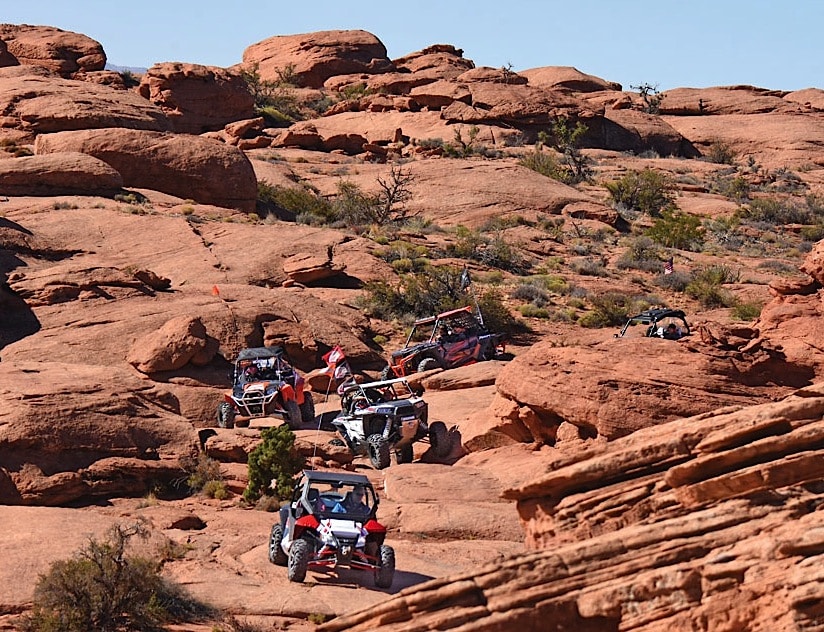 Other rallies showcase even more of Utah’s trails. On August 16-18, experience the Manti Mountain Run for ATVs and UTVs in the Manti-La Sal National Forest. The next week, on August 21–25, the Bryce ATV/UTV Rally showcases trails next to Bryce Canyon National Park. We experienced these trails at the press introduction of the 2015 Wildcat 700 Sport and Trail, and the trails and scenery are breathtaking. September 5–9, check out the Arapeen OHV Trail in the San Rafael Swell; the Arapeen ATV/UTV Jam has headquarters at the Castle Valley Outdoors Ranch and Lodge in Emery County. The San Rafael Swell has dramatic geology and gorgeous scenery, but it’s most famous for its singletrack trails. And last, Monticello hosts the San Juan ATV Safari on September 12–15, and this jamboree features trails in the Blue Mountains and surrounding canyons near Canyonlands National Park. However, it doesn’t accept UTVs and is limited to 350 ATVs.

All nine of Utah’s UTV jams showcase the rugged beauty and challenge of its OHV trails and prove that it’s truly “The State of Sport.” The more I hear that phrase, it does have a better ring than “Utah, the Wonderful Works of Erosion.”

Check out the UTV Action “Schedule” for jamboree contact information and get sideways!