WHAT ALL-NEW UTV IS COMING NEXT? 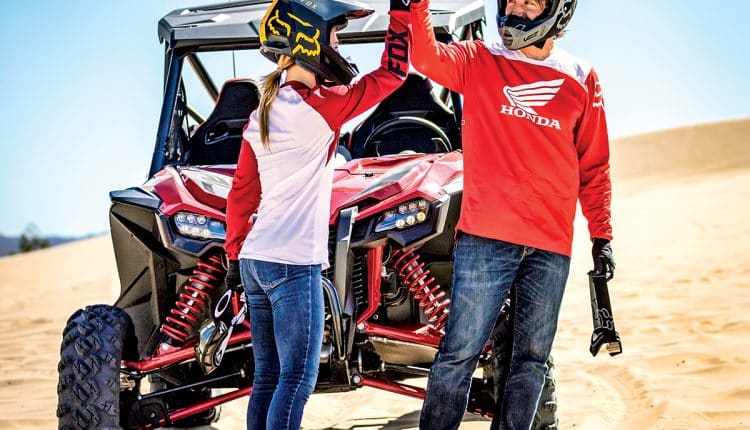 — After Honda’s Talon what will Kawasaki, Suzuki & KTM offer? —

Well, sports fans, Honda brings the sport UTV total to 81 choices and unleashes even more innovation and performance for the UTV world.

Honda enters the sport UTV market with the 64-inch Talon X and 68.4-inch Talon R, mating a Pioneer Dual-Clutch Transmission (DCT) lower end (originated in the 2010 VFR1200F motorcycle) with a modified Africa Twin CRF1000L upper end to make 104 crank horsepower. Two automatic clutches engage even and odd gears for faster shifts, up or down, and the DCT has both a gated shifter (P-R-N-H-L) and paddle shifters, plus Auto and Manual Drive and Sport modes. Honda’s innovative i4WD system from the Pioneer 1000 senses which front tire is slipping and applies more power to the opposite wheel. It also uses the Pioneer 1000 Deluxe’s Hill-Start Assist mode. The Talon’s i4WD also senses wheelspin and applies the brake on that wheel, then applies five times that much force to the opposite wheel. This is Honda’s exclusive new Electronic Brake-force Distribution (EBD) system.

So, Talons are closest to Yamaha’s YXZ1000R Sport Shift, down to the Fox Podium shocks with dual-rate springs and adjustable crossovers on 2.5-inch bodies, but Talons sport 7/8-inch shafts instead of 5/8-inch shafts and 28-inch tires instead of the 2019 YXZ’s 29s. Talons are the second sport UTVs to come stock with 15-inch rims, like the Textron Wildcat XX, but are the first to have an ECU that learns to adapt power to your driving style and shifting points.

Check out the new Talon X and R starting on page 24 for more news and innovations. With Honda finally joining the sport UTV market, it makes us wonder what is coming next and from which manufacturer.

When we toured the KMC factory in Missouri a few years ago to see Mule Pros being built, we saw a 300-horsepower Ultra 310X jet ski—a supercharged, 1,498cc inline four. We drooled, pondering what a 300-horsepower UTV would be like. The inline four had dimensions of 83mm x 69.2mm (times four) and produced 16.8 psi of maximum boost and 1890 pounds of thrust! One could only imagine what that would be like mated to a heavily modified Teryx drivetrain! Or, take the SX-R jet ski, which is a normally aspirated inline four with 60mm EFI throttle bodies making 160 horsepower.

Of course, these two behemoths don’t adhere to the current UTV industry’s 1000cc displacement limit. So, why not mate an existing sport-bike upper end with a Kawasaki UTV lower end? How about sleeving down the Ninja 1000 ABS, a 1043cc inline four with 77mm x 56mm dimensions, 11.8:1 compression, 38mm Keihen EFI throttle bodies, an assist-slipper clutch, and Kawasaki traction-control and corner-management function (KCMF)? It makes 81.7 pound-feet of torque and sports anti-lock brakes (ABS). It makes 138 horsepower at the crank and 125.1 horsepower at the rear wheel. It would be a beast if turbocharged.

When do we get to see Kawasaki’s sport UTV entry?

Suzuki is bringing the iconic Katana (a type of forged samurai sword) sport bike back for 2020. Could a sport UTV be in the works as well? The Katana engine would need to be downsized from the current 1100cc quad cylinder, which is a long-stroke version of the 999.8cc GSX-R 1000. The new Katana has a new throttle-control map, a back-torque-limiting clutch, Suzuki’s three-mode traction control, and a peak output of 147.5 horsepower. It, too, sports ABS.

As wild as a KingQuad Katana UTV would be, it doesn’t meet the 1000cc UTV displacement limit. How about mating a GSX-R1000 upper end with an oversized KingQuad 750 lower end? The GSX-R 1000 makes 199 horsepower at 13,200 rpm and 86.7 pound-feet at 10,800 rpm via a DOHC inline four with variable valve timing (VVT), traction control, launch control, drive-mode selector and ABS.

How bad would a normally aspirated 200-horsepower Suzuki sport UTV be?

Ten years ago, KTM Sport Motorcycles ventured into the four-wheeler market with the 2008 KTM 450XC and 525XC, and then the 2009 450SX and 505SX racing quads. These stellar ATVs were fully equipped with high-end components and were the most race-ready quads ever to hit the U.S. market. Unfortunately, the economy crushed these expensive imports like empty aluminum soda cans. There was also another quad based on the 690cc KTM dual-sport bike in the works to take on the Yamaha Raptor, but it never came to fruition.

The KTM quad experiment made KTM vow to remain a motorcycle company, but how cool would it be to see the Austrian icon join the UTV world?

How would the KTM 1090 Adventurer R—a 1050cc, 125-horsepower V-twin with low fuel consumption and long service intervals—lend itself to UTV use? Also, the Adventure 1290 is a 1301cc V-twin that makes 160 horsepower. Both have a back-torque-limiting slipper clutch, off-road ride mode, traction control and Bosch two-channel 9M+ ABS. If KTM were to incorporate a shaft-drive variation of either engine mated with the build quality and high-end suspension that went into its racing quads of the late 2000s, KTM would be a new player in the sport UTV market!

One can only dream, but sometimes dreams come true!