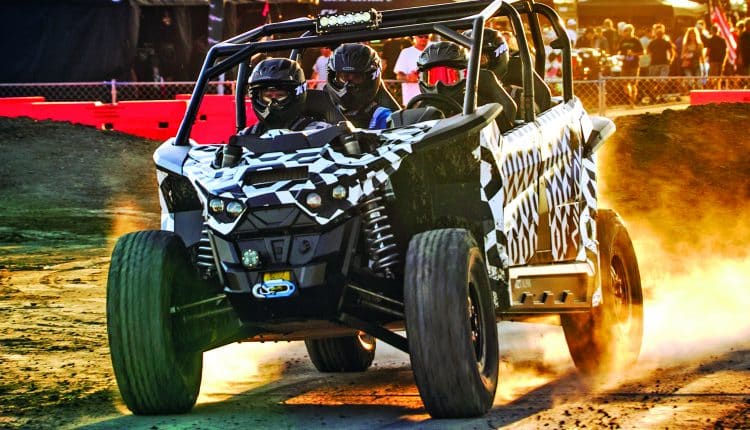 I don’t want to cause a panic, but the day could come when every new UTV on the market will be electric. Don’t worry, emissions regulations for UTVs won’t require zero emissions any time soon, and it’s not because there’s no way to get more power from 1000cc or smaller gas engines. More than 30 years ago there were 1500cc Formula 1 race cars that made 1400 horsepower. That’s close to 1000 horsepower per liter! I’m a huge fan of gas-engine UTVs, and I’m probably going to hate to see them go, but I have a feeling I’m going to welcome electric UTVs, because they’ll be better than the gas-powered vehicles we have now in many ways. Here are some reasons we definitely won’t hate electric UTVs:

Massive power output. Sure, there are gas engines that produce close to 1000 horsepower per 1000cc, but other than the power output and the sound, you probably wouldn’t like them. The cost, which is millions of dollars each, and the durability, which has a useful life of roughly one day of riding, aren’t practical for most UTVers. Electric motors are far more compact and efficient than gas engines, and they aren’t restrained by the 1000cc size limit like gas UTV engines, so electric UTVs could offer all the power we want.

No transmission headaches. UTV drive-belt failures create way more problems than they should. Yamaha’s and Honda’s geared transmissions don’t use belts, but electric UTVs don’t need transmissions at all, because electric motors make so much torque at all speeds.

They don’t need air to run. UTVs, water and mud are a sure-fire recipe for fun, but the fun stops fast when gas engines inhale anything but fuel and air. With proper waterproofing, electric motors can run under water, which creates all sorts of new possibilities. Imagine mudding when you don’t have to worry about the height of your engine and transmission intakes! Since electric motors don’t need air, that means they won’t need air filter maintenance, either. Think of the difference that will make for duning and long, dusty rides and races.

Zero emissions. If you don’t count the emissions created in generating the electric power electric UTVs use, they don’t produce emissions, which could make them popular with more people than ever. Big indoor UTV riding parks might even become a new all-season way to ride.

Low noise. Most UTVers love the sound of their machines, but not all non-UTVers share that love. Electric UTVs will be far more quiet than the most well-silenced gas-engine UTV, and the fewer people we bother, the better it is for our sport.

You can “gas up” at home. Since you’ll be able to recharge electric UTVs at home, you can skip those inconvenient last-minute dashes to overpriced gas stations on the way to the riding area. Some of your bonehead buddies will still forget to charge their machines the night before a ride, but you might be able to charge an electric UTV from a vehicle or a portable generator on the way to the ride spot.

For now, gas-engine UTVs offer the best combination of power-to-weight and affordability, and there’s more progress to be made, but electric UTVs are getting closer. To see how close, check out the article on Nikola’s NZT electric sport UTV in this issue.