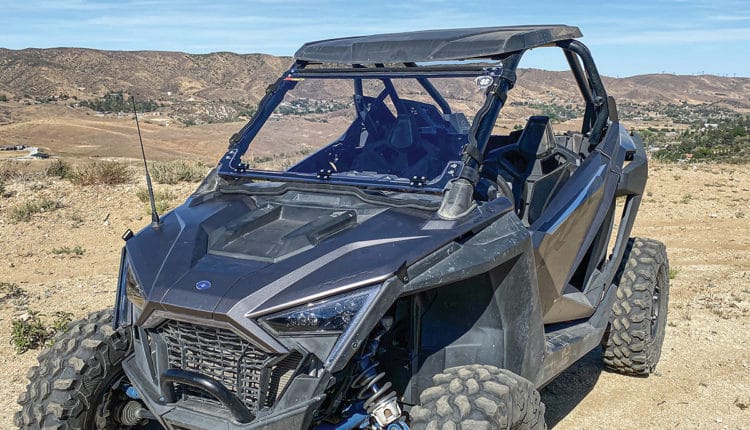 WHAT IT IS: SUPERATV FLIP-UP/-DOWN WINDSHIELDS

The big difference between the two products is their operation. The Super ATV flip-up windshield can be deployed and retracted while you are still seated. You can also “crack” the window and let just a little bit of air through by turning the handle 90 degrees, moving the windshield forward an inch, then securing it slightly open. When open, the lower portion acts as a deflector to direct wind up a bit, but it’s not as good as a true half windshield. The same goes for the flip-down version; it doesn’t deflect a lot of wind, but it does deflect some.

At speed, both stay in their intended position. Even after 100 miles of testing, the struts are holding up the Turbo S windshield, and the straps do a good job keeping the windshield secured to the hood.

We liked the price and ease of installation better on the Super ATV flip-down windshield, but having the ability to operate and “crack” open the windshield on the flip-up windshield was a big plus. Furthermore, we weren’t expecting the flip-up windshield to work well at high speeds or stay up in rough terrain—and it does. It does everything right and only takes a half hour more to install, so if we had to pick a favorite, we would choose to flip up.