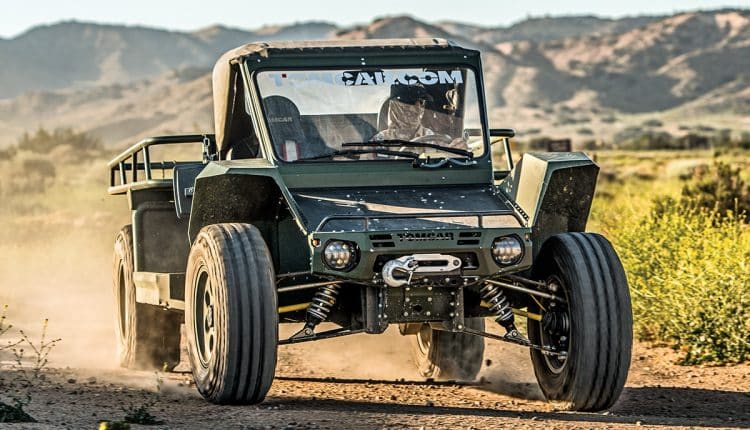 — Testing a different kind of UTV —

UTV enthusiasts are always looking for a machine that stands out from the crowd, so when UTV Action got a chance to test Tomcar’s new TX3, a new civilian version of a vehicle previously only available to elite military special forces, we jumped at it.

The idea for the first Tomcar began on a special forces mission in 1967 when six air-dropped Jeeps were destroyed upon landing, leaving the unit stranded behind enemy lines. The unit’s commander assembled two working vehicles from the wreckage to complete the mission. When he returned, that same commander began designing a more rugged vehicle. Now based in Phoenix, Arizona, Tomcar has been building vehicles for the military since 1992.

In some ways, yes, but in many ways, no, mainly because the Tomcar is built for continuous military use rather than recreational use, like normal UTVs. The TX3 is 72 inches wide, like some sport UTVs. It has a 120-inch wheelbase, a few inches longer than a RZR XP 4 Turbo S’. The TX3 has double-A-arm suspension up front and trailing arms in the rear with 14 inches of suspension travel at both ends.

That’s about where the similarities stop. The Tomcar has all the normally required street-legal lighting equipment, and it’s street-legal in Arizona. The front A-arms are made from large pieces of 1/4-inch-thick steel flat stock rather than tubing. The TX3’s huge trailing arms house a sealed triplex chain drive for the rear wheels, which eliminates rear-axle damage or failure. The Tomcar also has 17 inches of ground clearance. Thanks to an unusually sturdy frame and cage and the four-cylinder engine, the TX3 weighs 2700 pounds, about a thousand pounds more than a typical UTV, but it can carry 2700 pounds and tow 2700 pounds, and Tomcar assures us these ratings are conservative.

A 1500cc, inline, four-cylinder, 16-valve gas engine with 107 horsepower. If your mission calls for it, you can order the Tomcar with electric or hybrid power.

WHAT KIND OF TRANSMISSION DOES IT HAVE?

A fully automatic, dual-range, belt-type continuously variable transmission without automatic engine braking. The machine we drove was set up for desert terrain with an exposed drive belt, but Tomcar also offers a sealed belt case.

WHAT KIND OF 4WD SYSTEM DOES IT HAVE?

Selectable 2WD/4WD with pneumatic-locking front and rear differentials. Electric differential lockers are much more common, but Tomcar’s system has proven itself in combat and in our testing, which is good enough for us.

HOW FAST IS IT?

The TX3 can do 70 mph, but it doesn’t accelerate as hard as 1000cc recreation UTVs like the Ranger XP 1000. It is fun and responsive, though. The 1500cc engine’s abundant torque gives it a fun, sporty feel for a vehicle with such massive carrying and towing capacities.

HOW IS THE POWER DELIVERY?

The Tomcar has so much grunt, it doesn’t even seem to notice steep terrain or deep, power-sapping sand. Our TX3’s cargo bed was loaded with a spare tire and gear, and it felt like it could have towed another vehicle on most of the terrain we rode without working hard. The Tomcar doesn’t have a sophisticated drive-by-wire throttle like some UTVs, so there’s some throttle pedal bounce in choppy terrain, but other than that, it’s very tractable. The engine puts out lots of low and midrange power and a decent top-end pull.

HOW DOES IT HANDLE?

It’s outstandingly stable, certainly the most reassuringly stuck to the ground vehicle we’ve driven in steep, off camber terrain. It also corners easily and with very little body roll, not at all what we expected from a 2700-pound machine with 17 inches of ground clearance and no sway bars.

HOW IS THE SUSPENSION?

It’s surprisingly smooth and capable. We were surprised because we expected the TX3 to ride like a pure utility vehicle, when it’s actually designed to cover rough terrain pretty quickly, often with a heavy load. With 14 inches of travel and ADS remote reservoir shocks at both ends, the TX3 has no trouble dealing with bumpy, choppy terrain, even at an aggressive pace.

HOW WELL DOES IT HANDLE CHALLENGING TERRAIN?

It’s extremely capable. Challenging climbs are no problem, even when they include large bumps and deep ruts. The Tomcar can also maneuver on sidehills with an unreal level of surefootedness. With lockable front and rear differentials and 17 inches of ground clearance, rocky, rutted stream beds with steep ledges weren’t obstacles, just more fun parts of the trail. We crossed shallow water repeatedly, and the exposed drive belt never slipped, but we’d want the sealed belt cover for deep crossings.

HOW ARE THE DETAILS?

The Tomcar is a mixture of spartan, functional military engineering and impressive comfort. The dash and floor are metal; rugged, but they reflect more cabin noise than you’ll find on more luxurious recreation machines. The range selectors on the pre-production units we drove required more effort than most, but they always worked, and Tomcar promises smoother action on production versions. PRP suspension seats and four-point harnesses provide excellent comfort and support. The full street-legal equipment comes in handy even if you don’t plan to put a license plate on the machine. Tomcar frames have a lifetime warranty.

If you’re looking for a truly different kind of UTV, or you need one with unmatched carrying and towing ability, you have to check out the Tomcar TX3.

Starting procedure In neutral or any gear with