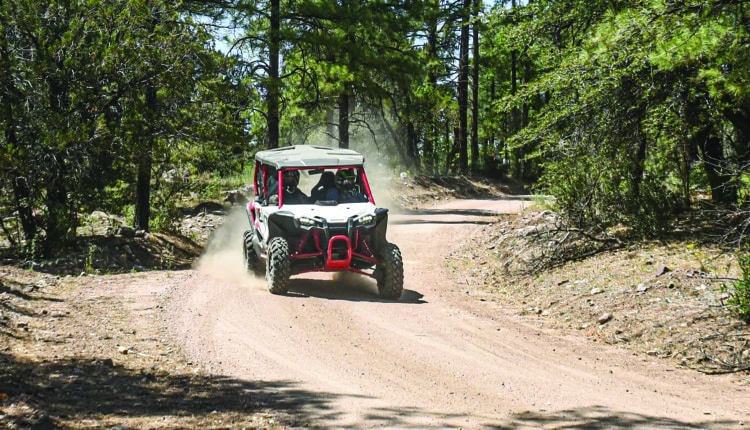 On June 6th, America’s celebration of the WWII D-Day invasion at Normandy, I put on and experienced a great ride with friends in Arizona’s Prescott National Forest. This epic adventure came to be known as the Mike-Mike Ride. It started when I dropped by Mike’s shop to catch up with Mike and Mary, caretakers of “Flatbed Fred the Dyslexic Diesel.” Mike and Mary are in the process of relocating from Los Angeles to a new place near Prescott. While Mike was out in the shop, Mary told me she was having a surprise birthday party for Mike and was looking for a way to keep him away from the house that day until 6 p.m.

I texted another friend named Mike, who also had relocated to Prescott a few years ago. Mike is a retired musician who has played with several famous bands over many years, including New Riders of the Purple Sage. I had last visited Mike and Michele in March of 2019, and Mike and I had explored some PNF trails while shooting the 2019 Kawasaki Teryx4 800 FI LE. He texted back right away that they were open that weekend and asked if I’d bring a UTV. I texted Cain to see what was available, and he wanted me to shoot the Honda Talon 4 Live Valve there. I love it when a plan comes together so quickly; I told Mary I was in. I drove out to Mike and Michele’s that Friday and finalized plans for the Mike-Mike Ride with Mary that night.

I woke to an epic spring day—little did I know that later I’d be living the start of the movie Fallen, with Denzel Washington saying, “Did I ever tell you about the time I almost died?”

Mike called me the next morning, and we made plans to meet for the Mike-Mike Ride. “Music Mike” and I met Mike and Mika at the Old Stage Stop to top off the UTVs and cooler, and we bought subs for lunch on the trail. Mike has an RZR XP Turbo that’s plated for street use, so they followed us to the area we had scouted two years before. My plan was to start the Mike-Mike Ride with Trail 9821B, which we had discovered last in 2019, but the trail marker off FS68 had been removed. We ended up on 9872B and 9871B, which are rocky ridge trails where I had shot the Teryx4, but the area had burned since 2019. We pressed on to Camp Wood and Trail 95, where there was a pristine creek crossing that had been the lead spread for the T4 test (UTV Action, June 2019). It was now a mud hole, and many of the trees along 95 were bug-dead. I was getting discouraged, but my mood brightened when we reached the 9821B trail connector.

As we traveled north on 95, we got out of the burn area and into healthier forest. We found a scenic spot to shoot the Talon 4 and eat lunch, then we continued north to Walnut Creek and FS125. We were looking for Trail #9, and FS125 was the widest and best-groomed Forest Service road I’d ever seen. As we cruised west, we crossed a few private ranches and creek crossings with a one-lane bridge at each crossing. One such crossing was a lazy S-turn with a big dip. We were doing 30–35 mph as we dropped in, and I saw an 18-wheeler barreling towards us going at least that. In an instant, 50 years of racing experience and instinct kicked in, and I did the only survivable option.

I matted the throttle on the Talon 4, crossed the bridge and swerved out of the big rig’s path. The maniac trucker didn’t even lift as we were enveloped in dust and roost. It happened too fast to even get shaken up about it. Braking would’ve been deadly, as the truck wasn’t stopping, and driving into the ravine would’ve also been ugly. One second you’re recreating on public lands and enjoying nature, and the next you’re fleeing for your life—not from a cougar or bear, but from a jerk in a Peterbilt driving like he stole it. But, danger is my business, as it has been since I started racing motocross.

We found Trail #9, and it was an epic-fast two-track through pine, juniper, and aspen groves with plenty of turns and hills. I was having a blast pitching the Talon 4 into drifts and letting the intelligent 4WD straighten us out with Electronic Braking Distribution. We came into a meadow, and a 250-pound black bear darted across the trail ahead of us. It was in a full gallop, going at least as fast as the truck was, and I slowed to watch it disappear into the woods. We pressed on T9 and found another photo spot. I had originally planned on a large loop incorporating #14, 702, 664 and 705 to return to Camp Wood, but the Garmin said that might be too tight on time, and I wanted to show Mike and Mika 9821B.

So, we went straight to Camp Wood and up 95 to the north end of 9821B, which is an awesome 64-inch trail. It’s tight and lined with Manzanita, scrub oak and cacti, and it has a great variety of terrain as it crosses ridges, ranches and creeks. It had been great in the Teryx4, and the longer wheelbase and travel of the Talon 4 made it even more epic. Better yet, all of the gates were open, so we didn’t have to open and close each one. It was awesome, and we took the 68 back to base camp. We bench-raced a bit, and Mike and Mika liked 9821B best. We shot a few more photos at camp, then I asked Mike and Mika if they wanted to extend the the Mike-Mike Ride and ride some more or go to the gun shop. They said, “Let’s ride,” so we hit the nearest trail, #666.

It started out nice enough with nice turns and undulations, but each successive hill got rockier and rockier. The PNF map even showed dirt bike singletrack at the end of #666, but there is no way I’d want to ride a bike on those jagged, loose rocks. We made the trail’s end and returned; those PNF rangers named that trail well! We returned to camp and loaded the Talon 4 on the Aluma, and Mike and Mika took a shortcut home, arriving at 6:02 p.m. Mission accomplished! We got cleaned up, gathered Michele and went to a great party with a DJ who played lots of Tina Turner. It was a nice end to a great day of riding—and the best part was living to tell about it.

What are the Safest UTVs for Beginners