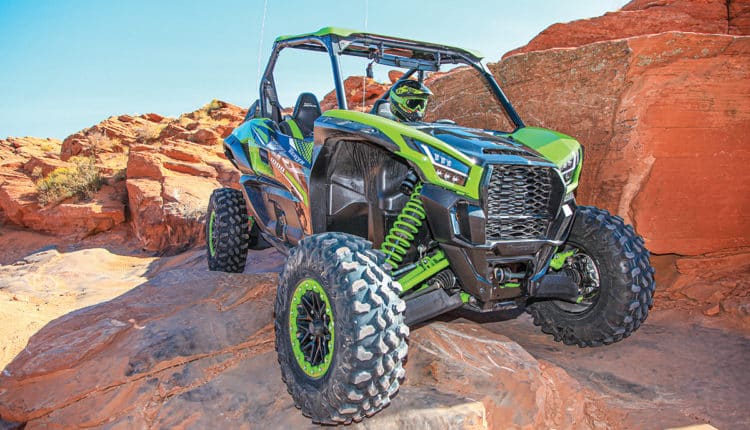 February means the new Ultra4 Racing series begins its season with the iconic King of the Hammers rock-crawling and desert-racing festival. KOH week is like the Daytona 500 meets Burning Man. The KOH UTV race has been a part of the schedule since 2009, and UTV entries have eclipsed the premiere 4400s, King of the Motos, and all other classes combined for the past couple of years. This will also be the second year of the UTV and Class 10 buggy challenge; buggies were faster in 2021, but who knows what’ll happen this year? The 2013 KOH UTV race was so gnarly that only three finished: Mitch Guthrie, Jon Crowley and Matt Enochs—an all-Polaris podium! UTVs have evolved and improved many times over since then, so much so that factory Can-Am athletes now also race the 4400 premier event. How long before one wins?

Last month we presented the “2022 Sport Two-Seat UTVs,” and there are five bona fide Rock Crawler or Trail Editions capable of rock bouncing. New for 2022, Can-Am offers 64-inch and 72-inch Maverick X3 X RC Turbo RRs, with the narrow RC selling for $26,399 and the wide one retailing for $30,599. Can-Am also offers the Maverick Sport X RC with many X3 RC features for $21,899. Kawasaki’s new Teryx KRX1000 Trail sports 31-inch meats and a list of RC-ready upgrades for $23,499. Polaris started the RC-ready UTV craze with the Trail & Rocks Edition XP1K, and the 2022 is $23,999. There’s also a sixth candidate for rock crawling, as the Wildcat XX LTD and SE are wired for optional Garmin TREAD GPS units complete with pitch and roll sensors and gauges.

Rock-crawling UTVs started with the 2017 RZR XP1K Rock Crawler LE and later became the Trails & Rocks Edition, and Polaris introduced it at Utah’s Sand Hollow Sate Park. It was a life-changer for me, as I started out as a motocross racer and preferred soft, loamy berms to fall onto over granite.

At the Polaris introduction, we were turned loose on a guided ride on Double Sammy, and I was at the wheel of my own Rock Crawler LE behind Jon Crowley. It was like having talent in a can, like Popeye gulping down a can of spinach. I stayed on Crowley’s rear bumper and did what he did, and the RZR did the rest. I’ve since done several Can-Am X RC (and Teryx KRX1000) tests at Sand Hollow. Each test gives me more confidence to tackle bigger, steeper and harder rock obstacles, and I’ve come a long way since my first introduction to rock crawling.

Way back in 2008 and the Rhino days of UTVing, Wally and I did a road trip in a Hummer H3 to the Tahoe side of the Rubicon Trail. There we met up with Del and Stacie Albright of the BlueRibbon Coalition for a Friends of the Rubicon trail cleanup and maintenance ride before a Jeep jamboree. It wasn’t long before the obstacles got too gnarly for the H3. We parked it and climbed into Jeeps with lockers and the whole works. It was so scary that I’d get out and shoot photos of the steepest rock faces.

Next, we went to the very first Moab UTV Rally, which later became the Rally on the Rocks (ROTR). We brought a 2WD Tomcar, and the trails were all north of Moab and pretty easy. At later ROTRs, I usually rode with Damon Cordone, founder of HCR Racing and long-time ROTR ride guide. He’s an expert rock crawler, but I still would get out on tougher obstacles and shoot photos. In fact, I met Damon in the winter of 2010 to do an HCR-UTV shootout of a modified Arctic Cat Prowler 1000, Teryx 750, RZR S and Rhino 700. Moab slick rock is really slick when covered in snow and ice!

Whether driving or riding with someone else, rock crawling has always been foreign to a guy who grew up playing in dirt and sand. But the better and more refined UTVs get, the more their performance makes up for my lack of talent and confidence when the rocks get as big as the UTV. At the 2020 KOH, Cain, Graham and I went to Chocolate Thunder in a stone-stock Pioneer 1000 to watch the nighttime craziness and chaos. We met up with Nick and Paulina Nelson, and Nick hopped in a Maverick Max Sport as Cain and Graham did the Pioneer, and the two proceeded to clean Chocolate Thunder in stock UTVs! Had it been daylight, I would’ve gotten out to shoot photos.