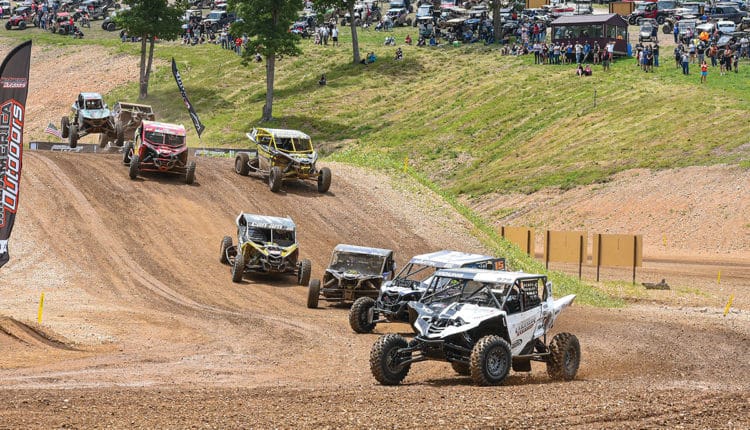 UTV racing is growing at an exponential rate, so much so that UTV entries at SCORE Baja and Ultra4 series and the King of the Hammers outnumber truck and other classes. The number of UTV race promoters is growing, too, so it’s easier than ever to get into competition with your UTV. Manufacturers benefit greatly in development and sales when their UTVs win, and Can-Am, Kawasaki, Honda, Polaris and Yamaha support their athletes with contingency programs. Yamaha’s bLU cRU supported YXZ1000R racers for the Championship Off-Road, SxS Sports KOE, King of the Hammers and Great American Short-course series in 2021, and Kawasaki supported Teryx KRX1000 racers in those series, plus WORCS, BiTD, AXCC and the Ultra4 Titan Terrain series. Can-Am also supports professional and amateur racers in these series, plus the Dakar Rally and the Texas Outlaw UTV face series. Talon racers have 13 series to choose from with Red Riders contingencies. And, racer support and contingencies don’t end with manufacturers, as numerous aftermarket companies also sponsor and provide contingency programs for national, regional and state series and events. Promoters are providing ever-larger purses to attract racers to their series, too. Here are UTV Action’s top 12 UTV racing series or events for 2022!

MidAmerica Outdoors in Jay, Oklahoma announces the most lucrative UTV racing series ever, with the $375,000 2022 MAO SxS Championship Series! The eight-round series starts March 19th and includes Memorial Day and Labor Day weekend rounds with heats on Saturday and mains on Sunday. New for 2022, Round Five will be part of the Visions Week on July 13-17th, which also includes the final Ultra4 Eastern rock-bounce round. MAO will also have Legends of the Fall, a Disney Premiere Event, on November 11-13th. See www.midamericaoutdoors.com for per-round and series payouts, rules, and more information.

Not only is this the richest UTV racing series, it also boasts the best track and facility. MAO is located near Grand Lake O’ the Cherokees and has very hilly and rocky terrain. The short-course track has a downhill land-rush start with three huge uphills and downhills visible from the grassy spectator hill, and natural terrain is enhanced with various jumps and berms for challenging and close racing. Be warned and arm your UTV for rock roost with suspension, CV/axle, and brake guards. MAO also boasts a woods course, rock bouncing hills, sand drag strip, Pro shop, restaurants, pool and tubing loop, concert stage, numerous cabins, and huge camping area, plus MAO is a Polaris Adventure Outfitter. Besides Pro Turbo and Pro NA 1000, MAO has 14 Amateur, Youth, Vet and Women’s classes for 170s to 1000s.

Race Director and owner Brian Adkinson announces the 2022 $275,000 Texas Outlaw UTV Race Series schedule, which will have 10 rounds and visit a new venue. Texplex Park in Midlothian hosts three double-header weekends in March, April and May plus a seventh round on June 11. After a summer break, the series then hits Eagles Canyon Raceway, a road-race facility near Decatur, for a double-header October 1st and 2nd. The series ends with the SxS World Championships at Texplex on November 12th and 13th with a $30,000 purse.

Originally a dirt bike park, Texplex has several tracks, and the short-course UTV circuit is fast with many large tabletop jumps, bowl turns, berms, and a land-rush start into a split-lane first turn. North Texas black clay blue-grooves nicely, and there are also white shale sections. Texas Outlaw and MAO both use a two-race format per round with a shorter first heat split into waves to determine gate picks for longer second races. Scores are combined for overall finishes with the lowest score earning 25 points. Second is 22 and third is 20. There are two Pro and 15 non-Pro classes, including trophy karts. Pro entries are $275-$300. Amateur entries are $125-$150, and Youth entries are $100-$125. See www.outlawseries.com for rules, info, camping, fees and payouts.

Originally SODA then Championship Off-Road Racing (CORR), this short-course series was started in 1997 with truck and buggy classes and was the Midwest version of SCORE races at Riverside (CA) Raceway in the ’70s and ’80s. It became TORC and now CORT, with Pro Mod/Turbo, Pro Stock, Pro-Am, Sportsman, 570, 170 and kart classes. With iconic venues like Crandon International Raceway (since 1969!), ERX Park, Bark River and Dirt City, plus excellent television coverage, Champ Off-Road is the premier short-course series. Yamaha offers $25,000 bLU cRU bucks for a Pro Mod or Pro Stock championship; Rodney VanEperen is defending Pro Mod champ, and Brock Heger is $25,000 richer as Pro Stock champ. 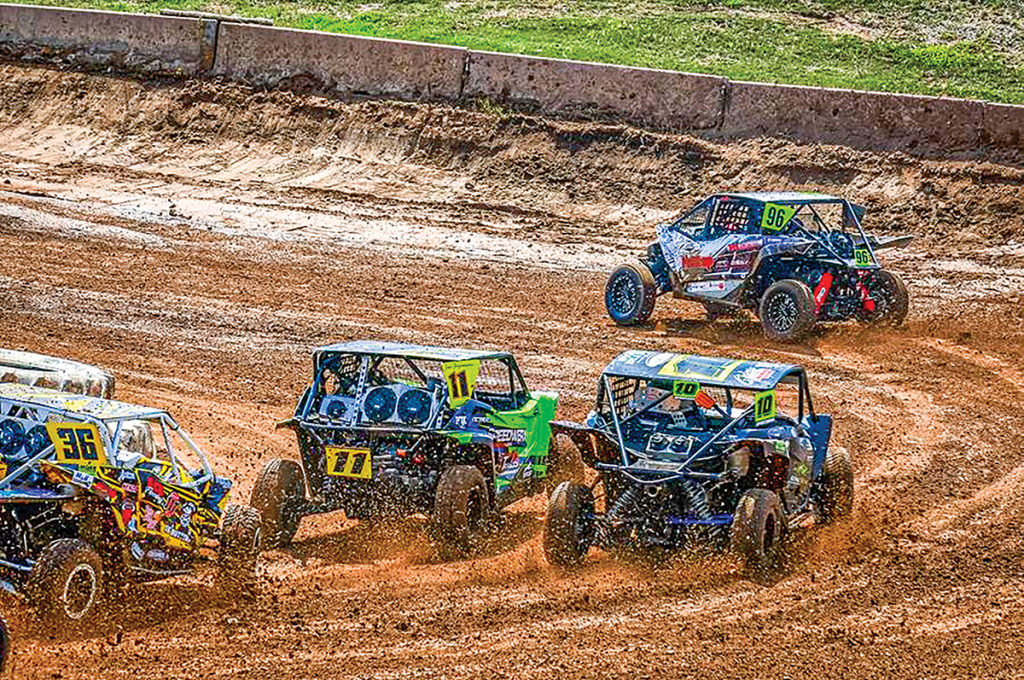 4) KING OF THE ELEMENTS

Before MAO and Texas Outlaw, SxS Sports offered the richest UTV racing series with the $150,000 2019 King of the Elements series. KOE mixes ice and dirt short-course races with three rounds, deciding Pro Mod, Pro Stock, Sportsman, 570 and 170 Championships. In 2021, KOE was supposed to grow to four rounds with a woods race, but it was canceled. SxS Sports was formed in 2019 by racing legends Johnny and CJ Greaves, and payouts have been $25,000 per round plus championship bonuses of $20,000. Owen VanEperen won the 2021 KOE Pro Stock Championship bonus, plus $25,000 from the Yamaha bLU cRU, and Kyle Chaney won the Pro Mod Championship KOE bonus and Can-Am contingency.

KING OF THE ELEMENTS SERIES

With 11 rounds in five states and 15 UTV classes from 170 to Pro Production Turbos and Pro Production 1000s, WORCS is the most attended championship UTV series, and they also have huge entries for the WORCS dirt bike and ATV series. The 2022 series started in January at Buffalo Bill’s Resort in Primm, Nevada, and the March 4-6 round at Crazy Horse Campground in Lake Havasu is a famous event with desert and beach sections (COVID prompted two 2021 rounds there). The 2022 series will have desert/MX rounds in Idaho and Utah, and the latter round at Cedar City will also be the WORCS 20th anniversary party weekend at the Three Peaks Oasis. There are also unique short-course rounds, such as the fifth-round Orleans Casino Arena and the Lucas Oil Off-Road course at the SxS World Finals on October 28th.

Beau Judge is the defending Pro Turbo champion and Can-Am contingency recipient, and Pro rookie sensation Cayden MacCachren is the Pro 1000 champion, plus he raced his RZR RS1 to third in Turbo points. In 2021, UTV Pro payouts were $1100 for a win, $775 for second and $575 for third. Pros have to be WORCS members; basic WORCS memberships are $40, and Platinum memberships are $180 with many added benefits. See www.worcsracing.com for registration, info, downloading the WORCS mobile app, and signing up for live text alerts.

6) BEST IN THE DESERT UTV SERIES

Best in the Desert announced 10 races for its 2022 racing season, but only six include UTV classes. The Parker 250 UTV-only event kicked off the season January 6th-8th, and the UTV Legends races at Laughlin moves to cooler February 17th-20th dates. The Silver State 300, Vegas-to-Reno and the Laughlin Desert Classic return, but the Bluewater Desert Challenge does not. BITD also has a Triple Crown Series within a series with huge payouts; Mitch Guthrie Jr. is UTV Triple Crown champ. UTV classes have been streamlined for 2022 with RS1s being eliminated; classes are Production Turbo (T901), NA Production (1801), Open (B901), Super Stock (S901, 2-seat only), Sportsman Rally (R901) and Trophy Unlimited (2901). Maximum UTV tire size will be 33×9.5-15, and minimum age for pros is 14. See new rules at www.bitd.com.

SCORE started desert racing the Baja Peninsula in VW beetles in 1969, and the four-round racing series draws entrants and spectators from around the world. Now there are several truck, buggy, bike, ATV and UTV classes; UTV classes are Pro Forced Induction, Pro NA 1000, Pro Stock, Pro Open and UTV Sportsman. There were 62 UTV entries at the 54th Baja 1000 with 49 finishers, and this year will mark the 55th running of the exalted event.

Ultra4 Racing kicks off its 2022 UTV racing series schedule for 2022 with two more rounds than 2021 and new venues. Like NASCAR, Ultra4 kicks off each year big with the premiere King of the Hammers being the off-road Daytona 500. UTVs had a grudge match with Class 10 buggies January 29th, qualified for the UTV KOH January 31st, and raced for glory February 3rd. The next nine events are split between East, West and North series with three rounds each and a July 15th-17th East-series finale at MidAmerica Outdoors’ Visions festival. A new California venue will host the West finale July 3rd-5th, and the Nationals move to Davis, Oklahoma.

Ultra4 also is streamlining UTV (4900) classes, and Stock Production UTVs must run factory frame pans, engines, CVTs, diffs, transmissions, steering racks, ECUs, Turbos, shock-mount points and bodies. Pro Modified UTVs also must use the list for Stock Production but can run aftermarket Turbos and frames. Both must be 80 inches wide or less and run tires 33 inches or smaller. Open UTVs must be 1000cc or less, while Unlimited UTVs must use OEM engines of any displacement, and they can also run in class 4400.

The end of March has traditionally been the time for the High Lifter Mud Nationals, but last year it was mid-April, and they’ve run UTV MX races with a nice purse the past few years. For 2022, the well-supported Mint 400 moves from December to March 9-13 with big payouts. The Iowa ATV Hare Scrambles Series starts April 23rd in Stockton, Illinois, and the GBC Heartland Challenge is August 5-6 in Fort Dodge, Iowa. Honda supports the Challenge and IATVHSS rounds, along with AXC, AXCC, IXCR, MWXC, UTV Rally Rush, and the December 10th Texas 12-Hour. Strap in and have fun!