UTV Action has long believed that all Rally Series should include UTVs, as does the Dakar Rally. Travis Pastrana’s Nitro Rallycross Series does just that; each U.S. round of the eight-round 2022-2023 Nitro Rally-X series has two days of UTV racing using Spec Maverick X3s built by Scottie Lawrence of Rival Motorsports (Lawrence was fifth in Pro Turbo points during the 2021 MidAmerica Outdoors short-course series). Rival Motorsports brings 12 identically-prepared Maverick X3s to each round, and the fourth round of the 2022-2023 NRX series was held at SoCal’s Glen Helen Raceway over the Halloween weekend.

The two day event crowns one UTV, E-class, and NEXT gas-powered champion, with UTVs getting a Heat, Semi-final, LCQ and Main on both Saturday and Sunday, and the two mains are combined for an overall winner. Racers can buy into each weekend with the X3 Spec cars rented out for $15,000 per weekend. That includes two Friday practice sessions, and Saturday and Sunday include free- and timed-practice sessions, Heats, Semis, LCQs, and Mains. Heats determine Semi starting grids, and the top two Semi racers go directly to the front row of the main. LCQs determine the rest of the grid for the UTV Main. The NRX course at Glen Helen had a gap jump for the 1000-Hp, 3500-pound E-Rally cars, and Pastrana jumped it on Friday at 70 MPH (110 KPH). UTVs were routed on either side of the gap jump, with the left route being the main one and the right the Joker, which each driver had to do once per race.

Brian Deegan flew in Friday night, so he missed those two Friday practice sessions. No worries, as Deegan was familiar with the former Lucas Oil Off-Road Racing Series and now Great American Short-course track from his Pro 2 and Pro Lite days. On Saturday, Pastrana was TQ with a 00:51.187 lap, Deegan was second with a 00:51.396, and Canadian Gregoire Michaud was third with a 00:51.430. In Saturday’s heat, those three gapped the field, which included Brit Robin Shute, Ken Block’s daughter Lia, teen sensation Ben Maier, Leticia Bufoni, and Jeff “Chicken” Matiasevich, ’88 and ’89 AMA 125cc West Supercross champion. Pastrana led most of the heat, and Michaud got by Deegan and began dogging Travis. Michaud landed on Travis, who got a left-front flat, and Deegan got by for the win over Michaud and Pastrana.

Deegan and Michaud were on the first row of the Semi grid, but Pastrana got by Michaud on the first lap and set after the leader Deegan. The three again gapped the field as they fought over the lead with Deegan taking the win over Pastrana and Michaud. That put Deegan on the pole next to Pastrana for the six-lap main, and Travis railed the outside of the first turn to take the lead, but Deegan fought back on the infield section to take point. Travis got underneath Deegan to lead the first lap, and he started to gap the #38 and #27. Pastrana put in protect mode and held off Deegan, who took his Joker lap on the fourth lap.

Deegan put in a heater lap as he got the white flag, knowing Pastrana had to take the Joker on that last lap. As Travis rejoined the main track, Deegan carried momentum to get beside Travis, who pushed Brian wide and into the muddy cushion. In the last turn, Brian ducked inside Travis and pinned it, getting beside the #199 as they hit the tabletop. Deegan stayed lower and jumped into the lead, winning the main by 0.034 seconds, as the crowd cheered wildly. 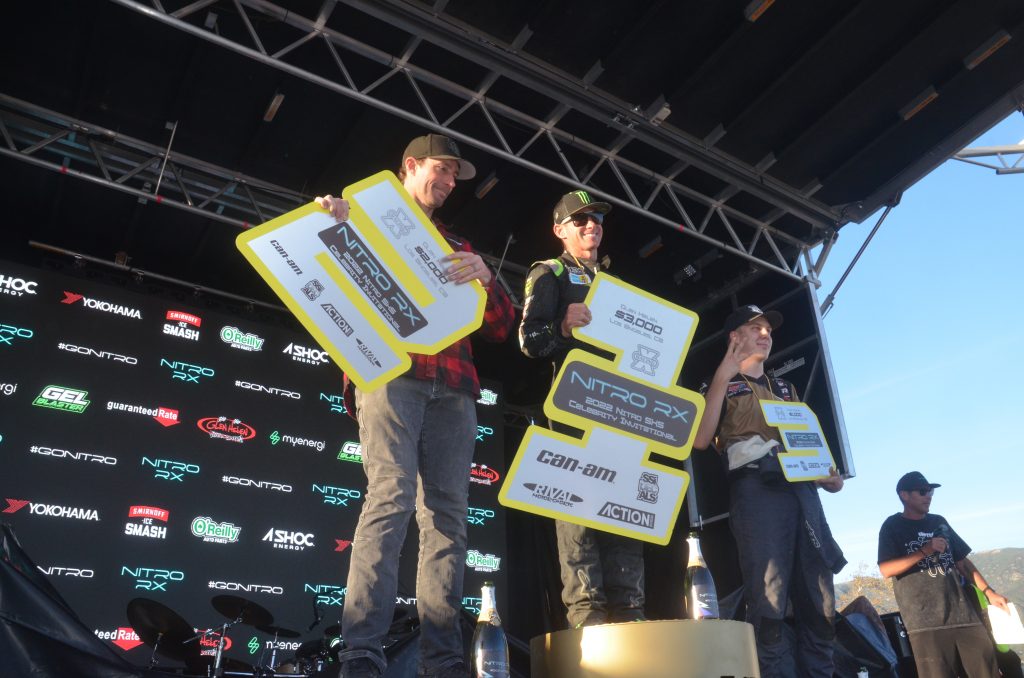 Sunday was also the Pastrana/Deegan/Michaud show throughout timed practice, the heat, the semi, and into the main. On the start of the Sunday main, Deegan and Leticia Bufoni tangled and rolled. The red flag waved as the safety crew put her X3 on a flatbed for extraction. Deegan was able to pull off of the track under  is own power and wanted to restart, but his roll cage was cracked, and it would’ve taken too long to replace. He wasn’t allowed to restart. On that restart, Pastrana took the lead with Michaud second and Ben Maier third, and Travis led every lap, turning a 00:51.014 before taking the Joker on his last lap. Pastrana remains undefeated, overall, after also winning the Minnesota round at ERX, as the series heads to Arizona’s Wild Horse Pass on November 12-13th.