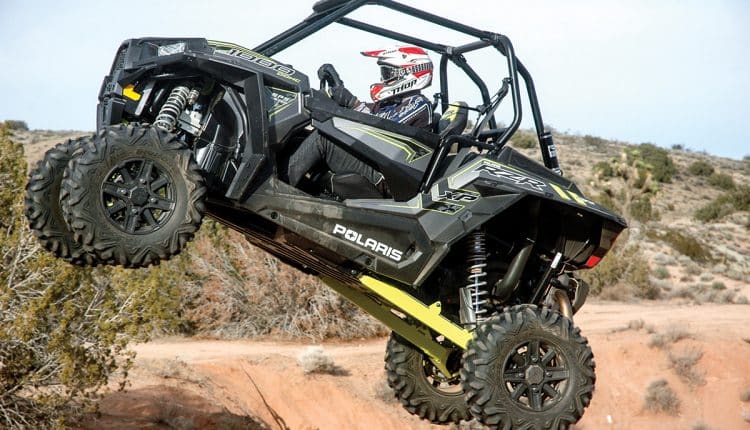 THE TROUBLESHOOTER — BY SARGE McCOY

I own two Polaris’—one is an XP 1000 with tracks that we use in the wintertime, and the other is a Ranger 570 Crew. We accidentally discovered a way to increase the speed of the little 570 by 10 mph! On the XP 1000 with tracks, we installed a HealTech Electronics SpeedoHealer V4 to force the Polaris speedometer to read correctly. With the track set up, it was almost 50 percent faster! During the summer when we mothball the 1000 and use the 570 Crew for transportation, we installed another SpeedoHealer V4. With that unit installed and set to 50 percent, the factory speed limiter is bypassed and the top speed increases from 44 mph to 54 mph! I thought your readers might be interested in our little mod.

Interesting “mod,” Boot! I have seen top-speed bypasses with an aftermarket ECU, but not with a speedometer corrector. I am assuming you are obtaining your speed readings from a GPS and not Cousin Bubba’s ’67 Chevy pickup! Regardless, be aware that revving the engine beyond the manufacturer’s intended rev limit could compromise engine and transmission life. Thanks for sharing, and you can move to the head of the chow line! Dismissed!

It recently came time to replace the battery in my 2016 Sportsman 570 EFI for the second time. First, who was the genius who designed that battery box? Because, I would like to have a few words with him! Second, I need a word with the bean counter who specs out such crap OEM batteries! Four years and two OEM batteries! Sarge, I know there are better batteries available in the aftermarket, but do you have a preference? Also, what can be done with the battery location?

Private Ground Strap, even if you could talk to the factory weenies, you wouldn’t get a straight answer! They have been putting the battery in that awful place for so long, they would give you a litany of so-called engineering excuses as to just why that was the only and best place for a battery, and there has never been a better design ever! Laugh, Boot! Seriously, the factory engineers never have to deal with a multi-year-old Zooter and replace or jump a battery in the rain with a 20-mph wind! So, to your first question, Boot; in flooded batteries, I like Interstate. In AGM, for ATV and UTV Zooters, I like Odyssey (and they can be used as a great lawnmower/snowblower battery, too). Lithium solid-state batteries such as Antigravity also work well, though their cold-weather performance is not as good as conventional batteries. For my money, you just can’t beat a good AGM for price versus performance. Now for the battery location: I would suggest the Quad-Logic battery relocation kit here: https://quad-logic.com/shop/sportsman-570/electrical-sportsman-570/sportsman-570-battery-relocate-kit/. They also have an installation video here: www.polarisatvforums.com/forums/polaris-sportsman-570/179991-value-line-sportsman-battery-relocate-kit.html. Ya know, Boot, it bothers me that you keep purchasing inferior OEM batteries when the first one failed. I deem you to be “UNKD,” and you need retraining in basic judgment. You are hereby referred to the CCU! Dismissed!

I am a fan of the Honda 250Xs. I was able to acquire a good 350X motor and stuck it in my 250X frame, but I’m having problems. First, it won’t rev out, and second, the headlights wont work. It won’t rev out even though I’m running a stock carb and muffler. The only way I can get it up to top speed is shifting it like a two-stroke! I’m thinking it could be the carb, because I’m running a K&N filter.

Private Un-Handy Andy, you just can’t drop a motor from one Zooter into another Zooter and expect it will run without some serious tuning. Even though you used the stock carburetor and muffler, you have discarded the factory airbox assembly and the wiring harness. The loss of the airbox alone and using a clamp-on K&N will cause the jetting to go dead lean. From here, I can’t begin to tell you what jets you need beyond that they need to be much larger than you have now! Your headlights don’t work because you didn’t integrate the 250X wiring with the 350X alternator. You need to obtain the 250X factory shop manual, as well as the 350X manual and trace the wiring for each and match the color codes to get things correctly aligned again. Yes, I can do it for you, but you need to learn for yourself. Here is a link to both shop manuals: https://drive.google.com/drive/folders/1eqvb5jw5em4pbbdrghsrbhfkh5rfr75l. With no recon, you just jumped headfirst into this project. Do the required legwork and do not ride your hybrid Zooter until you do get it right, Boot! On your face and count off 50! Dismissed!

I NEED TO SEE THE LIGHT

I want to install a light bar, fog lights and backup lights on my 2016 RZR 1000. I do a lot of work at night and need the extra illumination. I will tell you up front that I am not really mechanically inclined, but am tired of the local dealer’s so-called “technicians” under-doing and overcharging. Can you explain to me how to wire these accessories up?

Boot, you have already made the first step by admitting you are over your head, unlike the previous recruit! To make this job easier and cleaner, you have to determine if your Zooter has the installed Polaris RZR bus bar harness accessory (P/N 2881646). Watch this video: www.youtube.com/watchv=czhqnpklx_o. Next, requisition the UTV, Inc. 4 switch pre-wired harness here: www.utvinc.com/utv-inc-polaris-rzr-4-switch-pre-wired-accessory-harness/. Everything is plug-and-play, Boot. You should be able to handle it. Dismissed!

Email your questions to [email protected] and put SARGE in the subject line.

WHEN TO REPLACE YOUR CV JOINTS