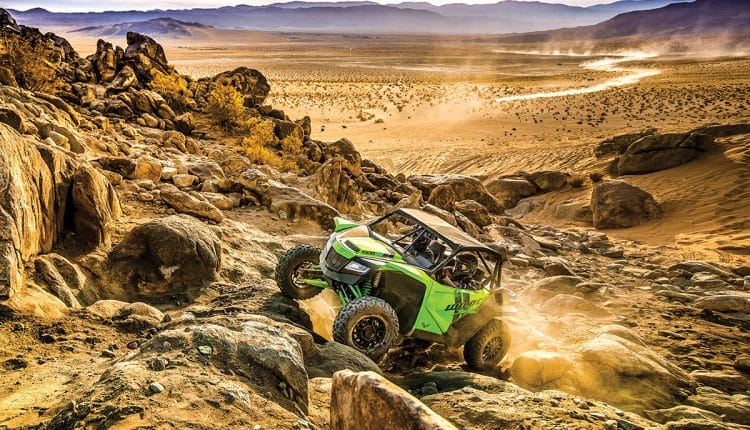 — An all-new machine that raises the bar for UTVs —

After careful consideration and long discussions with aftermarket companies, our staff and readers, we have chosen the 2018 Textron Wildcat XX as the 2018 UTV Action Magazine UTV of the Year. It gets the crown for several reasons. We feel the Wildcat has raised the bar as far as strength and innovation in not only the popular high-performance category but across all classes. The XX is well-thought-out and designed to take severe punishment.

From the double-shear steering components to the long-travel, rear-trailing-arm setup that installs at two pick-up points to eliminate the need for radius rods, the chassis is tough. Full doors and a beefy roof support give owners confidence for sure. Our favorite component is the Yamaha powerplant. Whether using it with a manual gear box or CVT, we love the power, torque, reliability and sound of the high-revving triple. The CVT-setup Textron used on the Wildcat XX will help it attract more buyers from coast to coast. We think Textron hit a home run with its first foray into the high-performance SxS market, and we can’t wait to see the four-seat and turbo versions that are sure to come. For now, we will be happy driving the current Textron Wildcat XX, UTV Action’s 2018 new UTV of the Year.

The list of contestants was surprisingly small for 2018, since 2017 was such a big model year. Plus, we think the major manufacturers will be making some big announcements in 2019, and there may even be a few surprises from the smaller manufacturers. One year ago the Can-Am X3 and its multiple versions that set the sport abuzz won our award overall.

This year Can-Am’s offering was limited to the 50-inch-wide Maverick Trail ($10,999). The Maverick Trail fills a gap in Can-Am’s lineup, meeting the needs of a big chunk of the U.S. and Canadian populations. It’s a solid choice. Can-Am also announced several more great versions of the Maverick X3, including the RC and the very affordable 900 H.O in 2018.

After placing well in 2017 with the YXZ1000R, Yamaha had another one in the running with the all-new Wolverine X4 ($15,999) this year. It’s the only four-seater in the contest. We have put a lot of time on this machine and have registered very few complaints. We love the quiet new twin-cylinder engine, speed key and new look. It fits right in with Yamaha’s new slogan “Realize Your Adventure.” We can’t wait to take more family adventures this summer in the 2018 Yamaha Wolverine X4.

Polaris has two high-performance machines that made their debut in 2018—the RZR RS1 ($13,999) single-seater and the all-new long-travel RZR XP Turbo S ($27,499). On the sport/recreation side, the Ranger XP 1000 is new for Polaris, and so is the youth-model Ranger 150 ($4999) with its innovative Ride Command safety system that features digital speed limiters, geo-fencing and a passcode-protected safe start, which are all good products from Polaris.

While we wait for Kawasaki to jump in the high-performance SxS market beyond the Teryx, Kawasaki is still delivering some of the best sport utility machines within the Mule lineup. For 2018, the Mule Pro FXR ($14,999) is a standout but is not different enough from the rest of the great Mule Pro lineup to get the win. Expect much more from Team Green in the near future.

For 2018 Textron announced a redesigned Havoc sport UTV that was basically a beefed-up Stampede with King shocks; however, even in the sport/recreation world, the Havoc was overshadowed by UTV Action Magazine’s 2018 UTV of the Year, the Wildcat XX.

THE NEW DECEMBER ISSUE IS HERE!