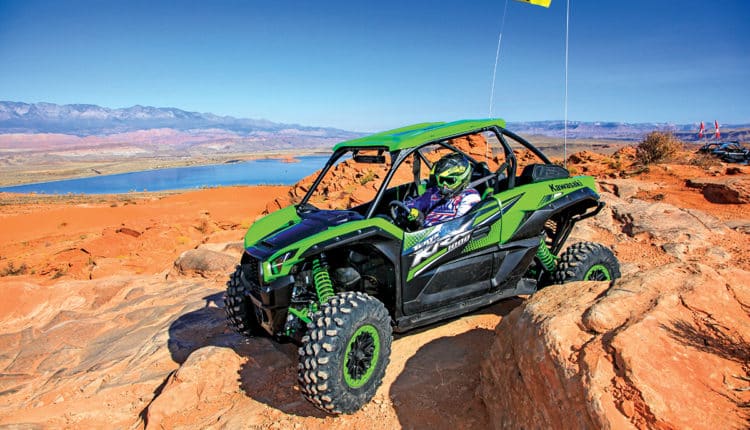 While 2020 will no doubt go down in infamy alongside Pearl Harbor and 9/11, the year that can’t end quickly enough for America, and it was also historic for the powersports industry in general. Fortunately, we have UTVs in 2020’s historic times.

I really hope that none of you readers have lost any loved ones or friends to COVID-19; if you did, I feel your pain. I lost my daughter Alison in April to pancreatic cancer. She was 41 years old, and she got no funeral, no memorial, no nothing. I even had a flight scheduled to see her the weekend she passed, but, no, the coronavirus trumps everything. My other daughter Summer has been in deep quarantine since March. Her husband Evan has severe immunity issues, so she has only left the house to visit the pharmacy and fast-food drive throughs. It’s like I’ve lost my whole family. And, if I don’t get to see my dentist and heart doctor soon, I may not make it to see if we’re still standing in 2021.

On the other hand, I’ve been blessed to keep my job and to see the powersports industry doing so well. The first sign of UTVs in 2020’s historic times came early. OHV activists lobbied the government for essential industry status, because UTVs and ATVs are used by first responders. Status granted! While manufacturers have lost productivity due to mitigation mandates and supply-chain interruptions, dealers have been doing quite well. With so many people seeking to escape chaotic cities, UTV, ATV, dirt and street motorcycle, and personal watercraft sales have gone through the roof. Units are flying off of dealer floors. RV sales are up 500 percent, as people don’t want to fly or take trains. Our national forests and other public lands are packed with families getting away from it all.

In other UTV news, it seems like an eternity since the historic two first weeks in January when Casey Currie and Rick Brabec became the first Americans to win the Dakar Rally in Saudi Arabia, with Can-Am and Honda respectively.

Also, 2020 was a historic moment for Kawasaki Team Green. For the first time in its 39-year history, Team Green included UTVs in its ground-breaking Racer Rewards and support program. Founded in 1981, Kawasaki Team Green has long supported amateur motocross racing across the USA. The immediate goal was to support Kawasaki KX racers with on-track parts and service, but the long-term goal was to scout, recruit, groom and grow national amateur champions and amass umpteen national championships for Kawasaki. Ultimately, many of these youth and amateur champions would go on to be factory Kawasaki pro racers and motocross and Supercross national and world champions.

For UTVs, being included in the 2020 Team Green Racer Rewards program is a huge deal. With the introduction of Kawasaki’s 2020 Teryx KRX 1000, this could well be the launching pad for racing UTVs to follow the trajectory of dirt bikes into becoming a world-class sport.

Team Green’s three greatest success stories are Jeremy McGrath, the “King of Supercross”; Ricky Carmichael, the “Greatest of all Time” (GOAT), and James “Bubba” Stewart, the first African-American SX national and world champion. Many other multi-time champions have come up through Team Green to stardom.

While “Showtime” McGrath cut his racing teeth in BMX before motorizing his racing career, he was briefly a Team Green-supported racer. He spent the last couple of years of the 1980s racing Mickey Thompson Grand Prix Ultracross for Pro Circuit Kawasaki, his first national limelight exposure. As Pro Circuit Kawasaki morphed into Team Peak Honda, McGrath was the team’s first champion in Western Regional 125s (now Lites and 250cc four-strokes) in 1991 and 1992. (Pop quiz: Who beat him in 1990?) While McGrath never won a title on a Kawasaki, he went on to win seven SX championships and 73 SX mains on Hondas and Yamahas. McGrath has returned to Kawasaki as a brand spokesman and does the “Science of Supercross” segment on NBC Sports’ Monster Energy SX coverage.

Ricky Carmichael and James Stewart are two of the winningest racers in AMA Amateur MX history, and they joined Team Green on KX65s and moved on to KX85s, KX105s, KX125s and KX250s. Watching them turn pro and fly on KX125s in MX and SX nationals was awesome. Both icons have also become the only racers in AMA/MX history to score perfect unbeaten seasons in all 24 (now) Lucas Oil MX National motos. Many, if not most, of America’s greatest MX/SX champions are Team Green graduates, and Team Green elevated the sport to where it is now—on top!

So, Team Green recognizing UTVs is a dream come true. I can see a bright future, and I’m hoping that Kawasaki is developing KRX170, KRX250, KRX570 and KRX Turbo UTV models right now. Team Green could well launch UTV racing up several levels, like it did dirt bike racing in America, and seed its athletes into the yet-to-be-formed AMA UTV Racing Hall of Fame!