Who Claimed the Title Of the King?

2018 King of the Hammers results, who was crowned the king? 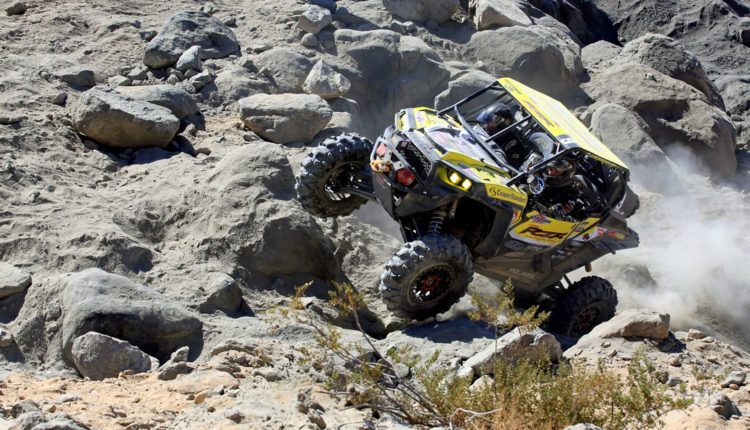 It isn’t uncommon to find families enjoying weekends in the desert with their UTVs, and King of the Hammers (KOH) is no exception. Just as the recreational market for these machines has exploded, so has UTV racing. Now the largest class during the week-long series of races, multiple generations of the Guthrie, Greaves, Campbell, Gomez, and Currie families showed up to battle it out in the Can-Am UTV King of the Hammers presented by HCR. UTVs have become markedly more capable each year, and their drivers have become equally as capable. Additionally, a huge number of crossover drivers have tossed their hats into the ring for the UTV race, including past KOH winners Shannon Campbell, Erik Miller, and Loren Healy. As a result, Hammerking promoter Dave Cole promised to make the 2018 Can-Am KOH UTV Race presented by HCR the toughest in history. 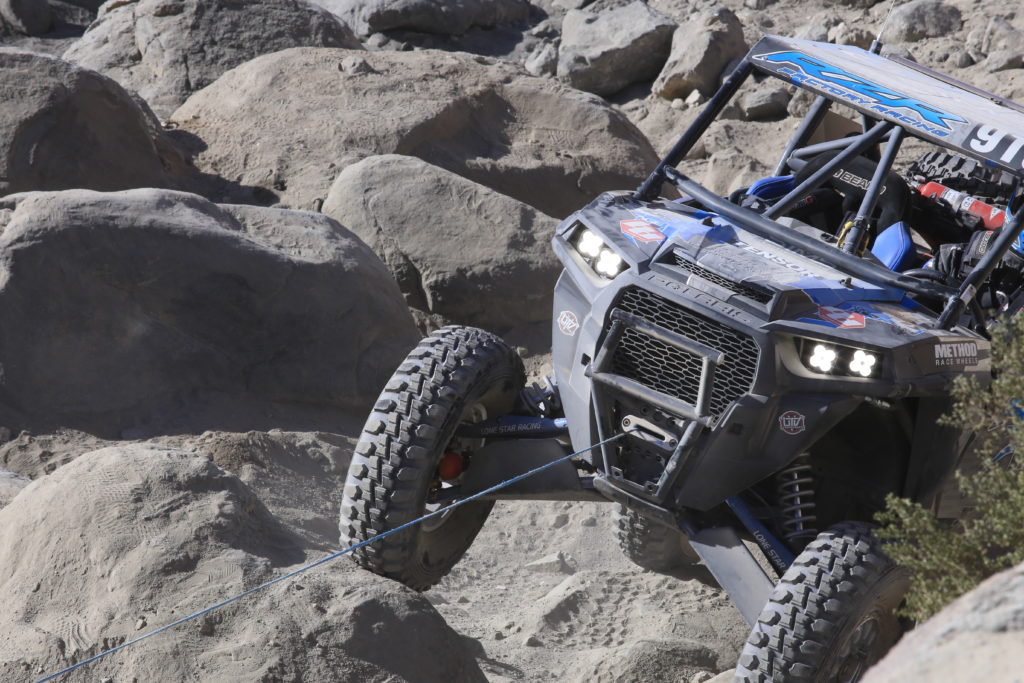 Short course racers dominated qualifying, with Johnny Greaves, C.J. Greaves, and Casey Currie starting at the front of the 118-vehicle field. C.J. Greaves jumped out to an early lead for the first 89 miles of the 134-mile race. “It came down to being rookies,” Greaves confessed. “We made a couple of big mistakes like when we rolled on Sledge. We are just happy to be out here. And hopefully we can do it again. We didn’t pre-run all of it. It takes a lot of knowledge and the rocks are crazy. I don’t even want to see the bottom of this car!” 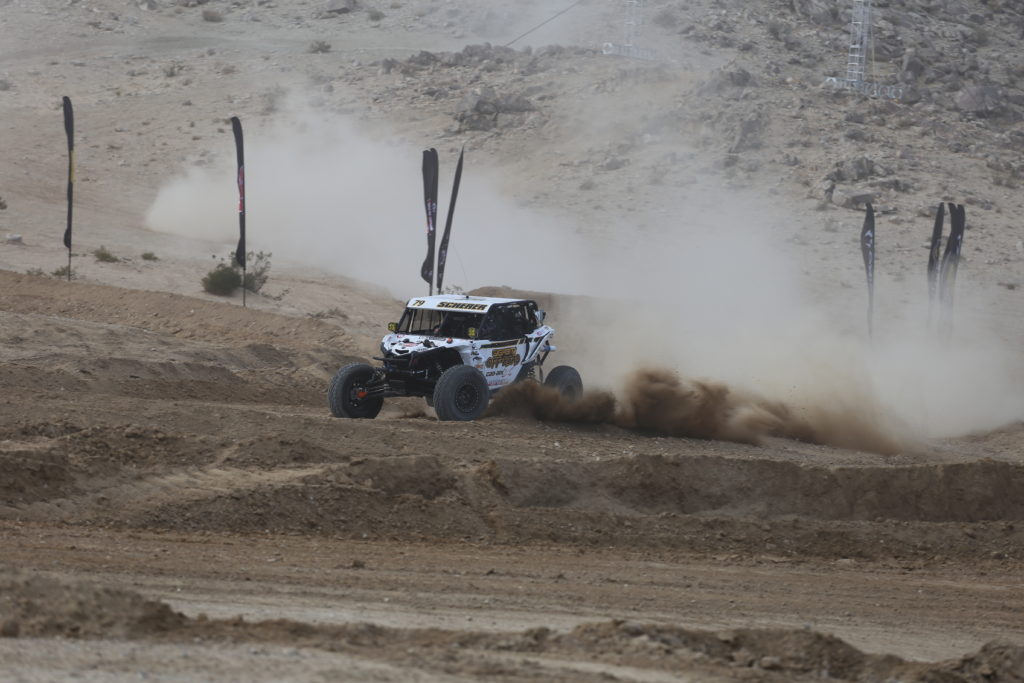 Greaves relinquished the lead to Mitch Guthrie Jr. after Greaves rolled coming down the brutally rocky Sledgehammer Trail. “I don’t know what to say, it has been a long road getting here. I’ve been riding with my dad and we had a few wins but I really wanted to do it myself. I was so nervous though, I have never driven in rocks like this before.” Longtime rockcrawling competitor Mitch Guthrie Sr. was an early adopter of the UTV platform, having won KOH race six times in the UTV class, making him the winningest driver in King of the Hammers history. But Guthrie Sr. suggested that his domination might be coming to an end after finishing third this year. “It’s going to be a question about returning. I would like to, but I don’t know if I’m a top guy anymore with the young guns coming up. This was the worst one ever so far this year physically.” 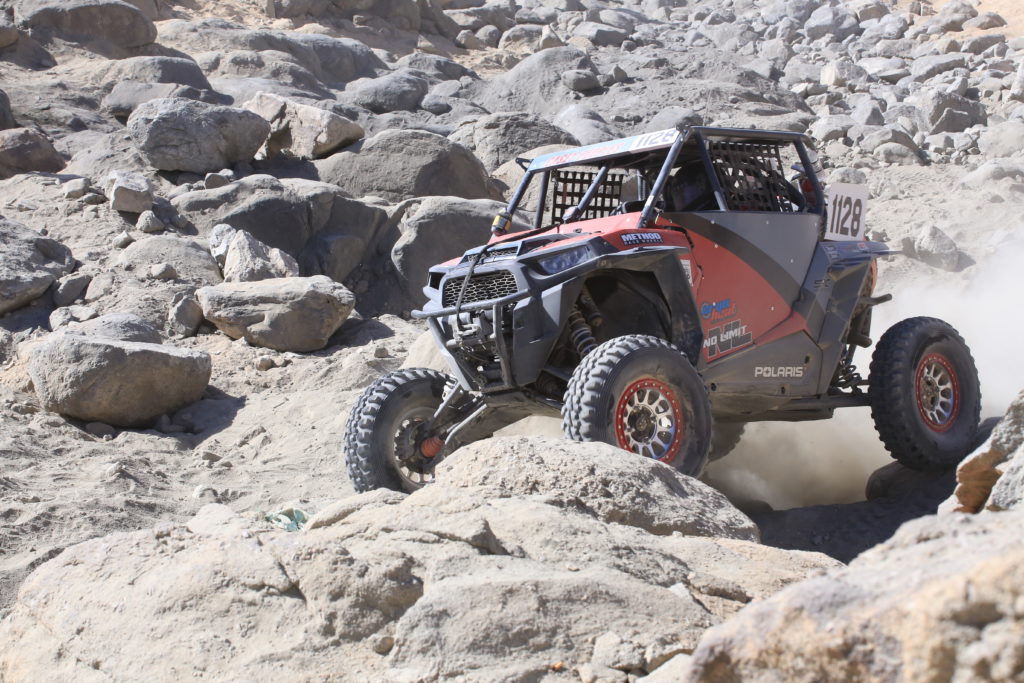 Champion desert racer Branden Sims came in second place, the third time he has been a bridesmaid in the KOH UTV Race. “We qualified 19th so not the best place to start, but we got out in the desert and were catching people. I typically run desert races, and this is the only ULTRA4 event I do each year. My father was a rockcrawler though, so I grew up with this.” The 134-mile course was the longest and most difficult in the history of the race, with only twelve of the 118 competitors reaching the checkered flag within the eight-hour time limit. 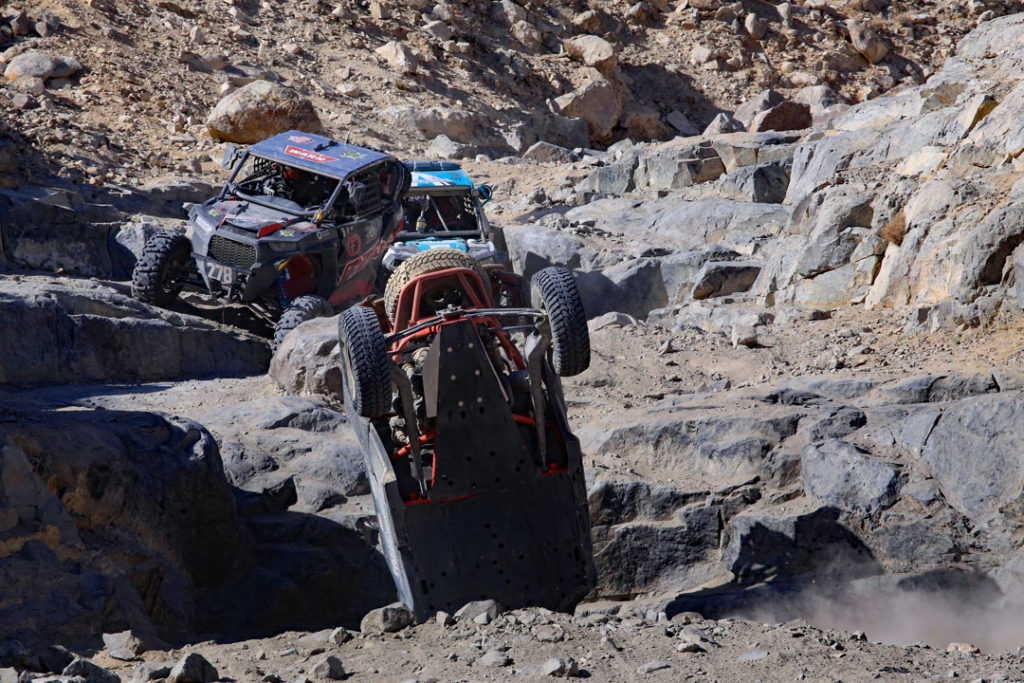 A Race to the Finish

On both laps the course went down Backdoor, a ten-foot- tall rock ledge that put most competitors onto their lids. “In short course we go all out for 20 minutes. In this thing, I had to talk myself out of being in race mode and to relax,” Johnny Greaves shared. Every once in a while, I would see someone in my mirror and I’d want to take off and my co-driver would have to reign me in. It’s not a race against other competitors, it’s a race to bring the machine to the finish.”