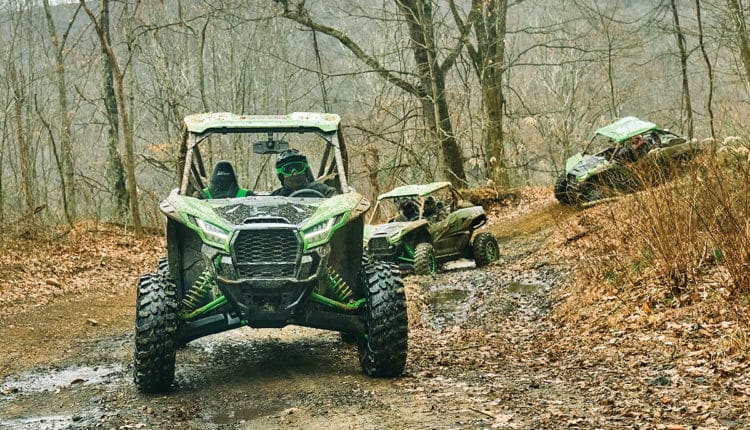 The reasons why we ride are as different as UTV enthusiasts, but the COVID-19 pandemic and resulting lockdowns have added to those reasons, just as they’ve added new UTV enthusiasts to our sport. I was one of the lucky few to attend a Kawasaki Teryx KRX 1000 media ride at the iconic Hatfield-McCoy trails before the 2020 lockdowns, and it was an epic ride in rain and mud. I’ve always loved riding in mud since I first started racing motocross, and my positive attitude about inclement conditions always showed in my results. Winning is the best feeling of all; it’s even worth the extensive cleanup afterwards.

Those great memories had to last through the remaining 2020 months, as all manufacturers canceled new-model press introductions. Attending press events is the best part of my job; I love riding great machines in new locations and hanging out with my media peers and the manufacturers’ press people. Then CFMoto held its 2021 model press event in September at ERX Motorsports Park in Minnesota, and ERX’s woods-racing course was epic. We drove UTVs and shot photos in great weather, then it clouded up and started raining. By then, I had done enough laps of the extended course to know the turns and hills pretty well, and I put in some hot laps in the ZForce 800 EX. Man, was that a blast! Learning a new track and machine is what it’s all about. What an adrenaline rush! Perfect conditions were the icing on the cake.

Here at UTV Action, we do a lot of rides testing UTVs, tires and other products, but it never feels like work. Getting outdoors is the best way to escape the lockdowns and unrest in the cities, even if I’m just doing laps around my local sand-wash short-course or riding trails I’ve ridden dozens of times. And, if it has rained lately, hero dirt makes it even more enjoyable, but any dirt will do.

I cover a lot of UTV jamborees, fun runs and races for work, and every new location and event is another adventure. Meeting new people and riding new trails is always a great escape, and so is touching base with old friends to test new products and suspension modifications at places I’ve been many times. The same old places deliver new adventures and content for the magazine and website. The SxS Adventure Rally was the lone major jamboree I attended in 2020, and it was a great time as usual. I got to test and photograph 2021 Can-Am Mavericks and Kawasaki Teryx KRX 1000s, but the best experience was the thrill ride with Damon Cardone of HCR Racing in his RZR Turbo S.

That was early November, and mid-to-late November is all about the Baja 1000. I went on two pre-runs with Marc Burnett, and the second was also with Cowboy Cerrone and Brian from LTI. Learning the course with those guys was a great experience, and it helped me devise a plan for shooting the 1000. Riding with much faster drivers taught me a lot as well, and it helped expand my own comfort zone for when I’m behind the wheel. But, the drive up Highway 3 from Ensenada to Ojos Negros was not so much fun. I’ve never been much of a road racer, and the narrow, winding turns with oncoming 18-wheelers was terrifying in a UTV. I rode the chase truck for much of that pre-run, and that was a great experience, as I had never chased before 2020. I learned a lot about the logistics of desert racing. Man, I’m glad I was in the chase truck on the return trip from San Felipe, as it was pouring rain on the descent from Ojos back into Ensenada. The ride up the mountain was scary in the dry daylight; they went down at night on wet road!

When I’m not riding two or four wheels, I’m watching Supercross and NASCAR, and the 2021 SX series was one for the record books. The three rounds at Atlanta Motor Speedway were epic, and the long track was better than Daytona. I was wishing I could have driven the Guaranteed Rate Teryx4 camera UTV on the AMS tri-oval; that would’ve been so awesome. Yes, some people get paid to have all the fun.

I also drove chase for a couple of adventure rides that Cain scouted out and put on for RJ and Ronnie Anderson, Reid at Walker Evans, Marcelo at Assault, and a bunch of Cain’s friends. Those were two great escapes and adventures, even though forest fires had Mammoth Mountain shrouded in choking smoke. I only got to ride two of the six days of those two rides, but providing support for the adventurers was cool, too.

Since my early days in motocross, whenever I got mad, I’d hit the track hard and let off steam. Once, in my Dirt Bike magazine days, I lost my temper at a new-model event at Glen Helen Raceway. I mean, I was livid, so I geared up and took my anger out on the track and the bike. When I had worked out the anger, I pulled off of the track, and four-time 250MX-champ Gary Jones stopped me. He said, “Man, that was the best I’ve ever seen you ride!” Thanks, Gary! When I need to get my mind right, nothing beats wind in the face!

HATFIELD-MCCOY TRAILS TO REOPEN MAY 21ST