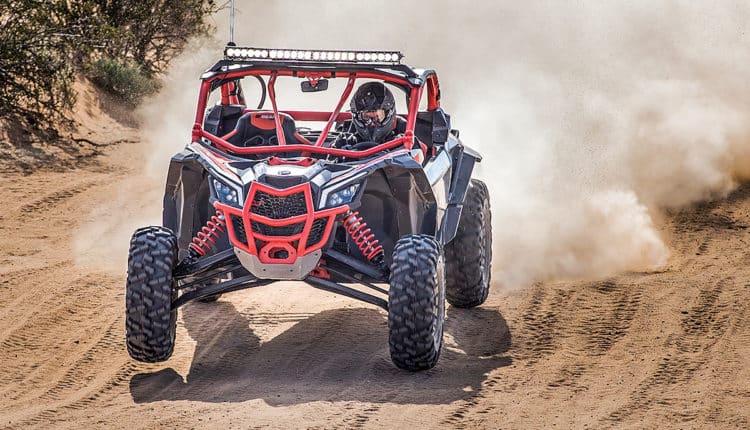 I have a “snub-nose” 2018 Can-Am Maverick X3. It used to be full length, but I’m concerned collision damage may cause my X3 front end problems. I crested a dune and rear-ended another Maverick who I followed over the crest, who stopped just over the crest and out of sight. And no, Sarge, I didn’t see his whip flag. He was too far below the crest of the dune. He had little damage (rear bumper). Mine, the front end, is pushed back about 4 inches. It steers okay and the alignment seems okay, but the front of the frame is crushed and/or bent. So, to fix this, can I graft on a front end from a used frame or pull out the bad tubes and have them replaced?

Private Cast Iron, yes, a good frame shop can remove and replace the front end. But, all the force that crushed the front end was also transferred into the main cage. Is that bent? Only a race shop frame fabricator or a frame-straightening shop could state definitively. Nor would I want to have the individual tubes replaced. If it were my Zooter, Boot, I would raise the paint and slide in another frame, either salvage or new. Fabrication costs can go vertical when trying to straighten or replace your damaged front end. And even with the straightened or replaced front end, after reassembly and road testing, you may well find that your Zooter still won’t feel right. A few of your ridding buddies, a weekend and a case of beer, and you can swap a frame, Boot! But, also be prepared to replace A-arms, too! I would suggest changing your MOS to 3521 after the frame swap! Count off 25, Boot! Dismissed!

We have a 2016 Polaris General Deluxe that originally came with 27-inch GBC Dirt Commander tires. We were on our way to the 2019 Full Throttle UTV Rally in Sturgis, South Dakota. We stopped at a motel for the night, and the next morning we found our General still on the trailer but up on blocks with no tires or wheels. They had been stolen! While upset, the Dirt Commanders were three years old with about half the tread. But instead of turning back home, my wife looked on Craigslist and found a lightly used set of 27-inch Clincher CST tires and wheels that would fit our General for 5 bills! So, Sarge, we did the rally, but ever since putting the clinchers on, the machine wants to pull to the left slightly. I have checked the air pressure, and both front tires are identical. Yet it still pulls a little bit. My wife suggested I ask you, because no one I have talked to can answer why this pulling is happening.

Boot, that is one story to tell! So, you weren’t that upset because the tires were half worn out? So, following that logic, if the tires were completely shot, you would have helped the thieves with their “midnight auto”? Laugh, Boot! May I suggest a set of locking lug nuts such as these so this won’t happen again:
https://www.amazon.com/polaris-
locking-nuts-ranger-maverick/dp/
b07pj5tgc2? And it wouldn’t hurt to look into a trailer tongue lock for roll-away thefts, a KryptoLok 10-S Disc Lock DFS, in orange. Now to your “pulling” problem, if the air pressure is the same left to right and your Zooter didn’t pull with the OEM tires, then I suspect the clinchers have been over-inflated at one time. You can swap the front tires, left for right, and see if it pulls to the right now. Or, you can measure the circumference of the front tires. I bet one is larger than the other at the same air pressure. A quick fix is to increase the air pressure to the left tire until the circumference is the same as the right tire. Check the pressure and circumference of the rears also. Those tires and wheels may not have been as good a deal as initially thought, Boot! That extra 5 bills on top of the rally expenses had to hurt! So, no PT for you if you follow my recommendations. See UTV Action’s All Terrain Tire Guide Here: https://utvactionmag.com/utv-tires-all-terrain/ Dismissed!

I have a Kawasaki Teryx KRF800G that lately has started running very hot. I have about 3000 miles on it with little problems. Now, when we are in the woods and not traveling very fast, the overheat light starts flashing. I tried checking the radiator and fan. Do you have any other tips to try?

Private Desert, there can be many reasons why a high-mileage Teryx Zooter would operate hot. The first thing, even though you checked the radiator, are the fins clear? I know you stated you checked the fan, but how? Power it externally to verify operation. Have you bled your cooling system? Jack up the front end, remove the radiator cap, start your Zooter, then bleed from the 10mm bolt near the thermostat. Next, fill up the radiator and run it through a heat cycle. You should also check the water-pump rotor for wear. Final things to check, Boot, are the fan relay and temperature switches. They can either be intermittent or totally failed. They have a history of getting brittle from age and can be easily broken. Either one can cause the fan to not operate, causing an overheating condition. The procedures are outlined in your service manual. What? No manual? How did I know you didn’t have one? Get one here, Boot: http://www.service-shop-repair-manual.com/2016-2019-kawasaki-teryx-krf800-krf800f-krf800g-krf800h-part-99924-1500-04-service-shop-repair-manual/. You, too, can count off 25, Boot! Dismissed!