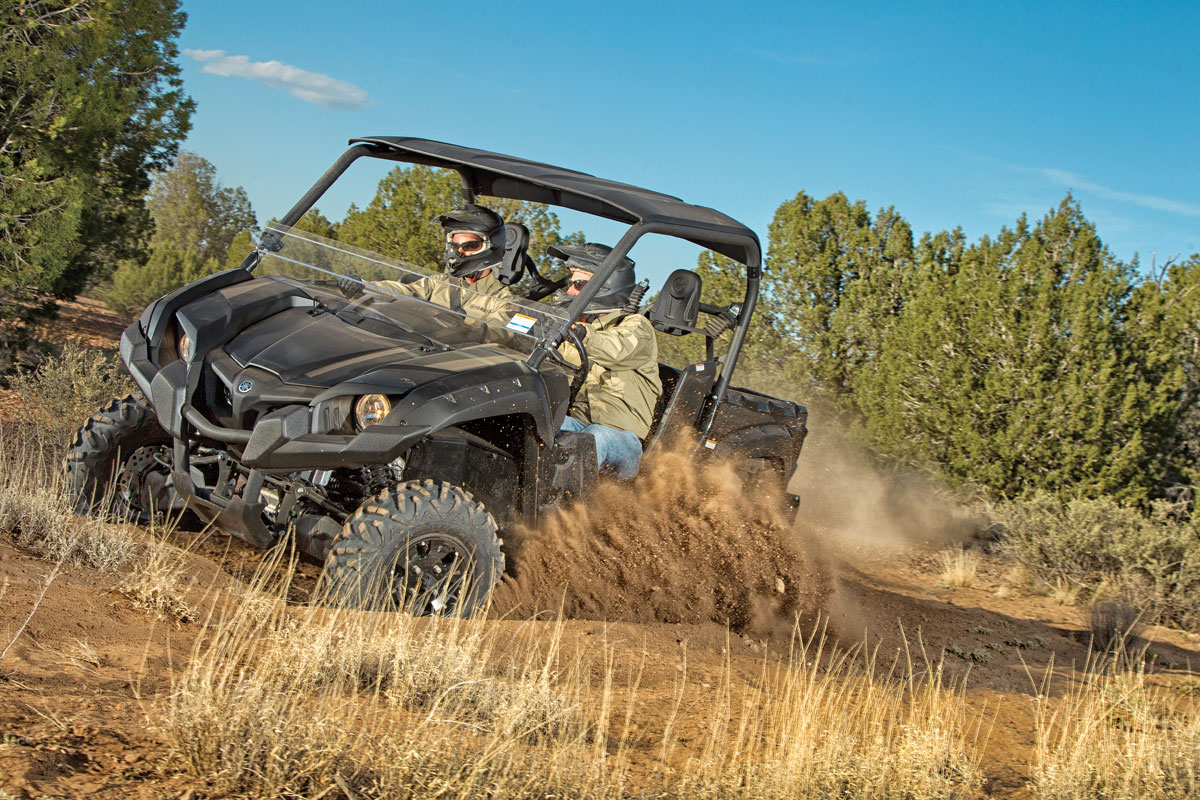 Yamaha continues its support of military and first responders (police, fire, EMT and search and rescue) with its new Viking 700 FI Tactical Black Special Edition, a stealth UTV that is also for sale to the public at large (unlike the Polaris Defense versions of the RZR). Yamaha debuted the Tactical Black Viking at the Shooting, Hunting, Outdoor Trade (SHOT) show in Las Vegas and has already donated one to the SEAL-NSW Family Foundation, an organization devoted to supporting Navy Special Warfare families. Yamaha introduced the Tactical Black Viking to the OHV and sporting press at Arizona’s Gunsite Academy training center, as it did the Tactical Grizzly (December 2012 issue) and Rhino (February 2013 issue) 700s in 2012.

WHAT’S NEW FOR 2014?
If you missed the original Viking 700 FI test in our December 2013 issue, Yamaha scrapped the Rhino 700 FI and upgraded its engine with a high-output cylinder head, camshafts, 10:1 compression head gasket, allnew exhaust and EPA-mandated air-induction system before stuffing it into an all-new frame with more width (5 inches), wheelbase (8 inches) and suspension travel (0.8 inches). The rear-engine design allows better access to the engine and CVT, and the wider chassis has raised sides for more ground clearance, like the Teryx 800’s X-frame. The 61.6-inchwide Viking has longer A-arms for 8.1 inches of travel, front and rear, and a wider cabin that seats three and is designed to fit between crop rows on farms. It also has an airbox that sits under the center seat and draws air from under the aggressively styled tilt hood. It’s designed to last an entire season without cleaning the dual-stage air filter. Although the Viking is more utility and designed for the farm and ranch, it’s now governed to 51-52 mph, which sport and explorer enthusiasts appreciate as much as first responders. The wheelbase is the same as that of a RZR XP 1000 (81.4 inches), and rack-and-pinion steering lightens effort.

The Viking is available with Yamaha’s EPS and new steering-wheel speed sensor. The new dash has four cup holders, a range selector and parkingbrake levers, an LCD digital instrument panel, switches for lights and the new 2WD/4WD/diff-lock switch. The center seat is 2.1 inches lower than the other two, and it’s tilted back 5 degrees for more elbow room. The Viking comes in Steel Blue, red, Hunter Green, and Realtree AP-HD, with or without EPS, and all but Steel Blue versions come with a plastic sunroof. Yamaha worked with Maxxis to develop 25-inch Bighorn 2.0 tires (front two-ply, rear four-ply), and the faster Viking has two-puck hydraulic calipers on all four wheels, plus Yamaha’s all-speed Engine Braking System (EBS). Shocks are nitrogen-charged HPG, but there are no preload rings, front or rear. Like the Tactical Black Rhino, the Tactical Black SE Viking comes with all-black plastic and new blacked-out, aluminum, six-spoke rims; a plastic sun roof; Over-fenders; accessory bed rails; and mud flaps. It’s only available with EPS.

HOW FAST IS THE SE VIKING?
As fast as the other Vikings, which are faster than the Rhino 700. Higher compression and hotter cams give the Viking an edge over the Rhino on obstacles and from turn to turn, and the 686cc single is governed to top out at 51-52 mph instead of the Rhino’s 41–42 mph. EFI and CVT response is similar to the Rhino, but the Viking pulls harder in the midrange and upper revs.

HOW IS THE DELIVERY?
As smooth as pulling a trigger. The one-way sprag clutch keeps constant tension on the CVT belt, and Yamaha designed the ducting for a coolerrunning belt. CVT tuning is excellent and paired well with EFI throttle response. The range selector is on the dash and is very positive, and the parking brake rides alongside it and the new 2WD/4WD/Lock switch. EPS lets you stay in diff-lock without increasing steering effort. Also, the high-output stator has an external oil cooler for running accessories.

WHAT ABOUT THE HANDLING?
It’s the world’s largest slot car. Turns can be hammered without fear of the mongo bicycle, as the Viking has a stance wider than a RZR S (at 61.8 inches) and a rear torsion bar to fight body roll. The Viking turns in effortlessly and drifts well on smoother surfaces, but rough corners are less predictable. To handle the rear-engine design and 600-pound bed payload, the rear nitrogen-charged shocks are very stiff, and this upsets the chassis in rough turns and creates rear-wheel chatter and hop. It handles better with a harvested deer or 200–300 pounds of ammo boxes and range equipment in the bed.

HOW’S THE IRS SUSPENSION?
Stiffer in the rear. There are no preload rings to adjust, and the spring rates are very high to resist bottoming with a loaded bed. This is a work vehicle, so shock spring and damping rates were designed for cargo in the bed. Travel is 8.1 inches, front and rear, which puts the Viking on par with the Teryx 800, but the shocks are stiffer, especially the rear. This increases bottoming resistance but also means a stiffer ride over trail garbage and less body roll in turns.

WHAT ABOUT ROCKS AND MUD?
The Tactical Black SE has both in its crosshairs. More travel and almost a foot of ground clearance enhance its rock-crawling abilities, and the sprag clutch, wider stance and EFI throttle response inspire confidence, as do the Bighorn tires. The new 2WD/4WD/difflock switch is nice, and the raised side rails add clearance in rock gardens. Mud is even more fun with the overfenders, mud flaps and sun roof, and the added power, travel and ground clearance are also welcome for mud bugs.

WHAT ABOUT TRAIL COMFORT?
It’s like a limousine. The two-piece seats are comfortable, and the center seat is tilted back to lessen rubbing shoulders. The driver’s seat can be adjusted, and the steering-stem angle and steering wheel are comfortable. EPS lightens steering effort and fights terrain kickback through the steering stem. Engine heat makes its way into the cab, and the rear-engine design is louder than the Rhino with its engine cowling. Storage is ample with two compartments in the dash and under the driver’s seat. An adjustable Z-bar is new for passengers, and dead pedals help occupants brace for impacts. Add Yamaha’s accessory deluxe gun boot with removable case (#ABAUXX67- 10-10, $107.49) and the Viking SE is ready to bag game.

WHAT ABOUT THE BRAKES?
They’re strong and progressive. Fourwheel disc brakes are backed up by full-time four-wheel engine braking (in 4WD) and a fifth disc for the mechanical parking brake. Bighorn 2.0 tires provide more traction than the Rhino too.

WHAT’S OUR FINAL ANSWER?
While the non-EPS Viking starts at the cost of the old Rhino 700 ($11,499), it’s a huge improvement in most categories, including power, handling, suspension, brakes, comfort, maintenance and top speed. Even steering effort is lighter, and adding Yamaha’s EPS makes the Viking drive like an off-road limo. The Tactical Black SE is only $500 more than the Camo Viking EPS, and it sports the aggressive Over-fenders and blacked-out custom wheels and plastic for a sinister look. We had a blast driving the Viking SE at Gunsite and using it in the manner hunters and first responders would, and the doors and cabin comforts made it easy to enter and exit with firearms and range equipment. But the best part is the 51-52 mph top speed. As Donald Sutherland said in Kelly’s Heroes, “We like to think we can get out of trouble quicker than we got into it.”