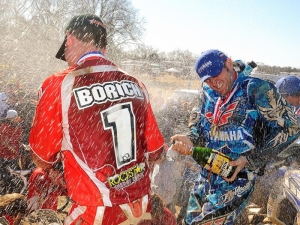 Photo By: Shan Moore
Borich and Kiser go at it on the podium.

After two rounds, Kiser and Borich share the lead in the series standings, with 55 points each, while Adam McGill (39), Ballance (37) and Bithell (34) round out the top five.

For the second week in a row it was Don Ockerman claiming the Motorcycle-usa.com Holeshot Award and the $250 that goes with it, leading fellow Yamaha riders Kiser, Ballance, and Jeffrey Pickens through the first turn. However it was Can-Am’s Bithell with the lead when the front-runners came through the finish line area to complete the first lap. For the next two laps Bithell maintained a slight lead while Borich, Ballance and Kiser fought over second. That order changed drastically when Bithell hit a tree at speed, collecting both Ballance and Borich in his wake, and handing Kiser the lead. From there it was Kiser’s show, with the Floridian cruising home with an eight-second cushion over second.

Photo By: Shan Moore
Taylor Kiser gets the checkers.

“This was a good win for me,” said Kiser. “We were running in fourth for most of the day, and then Bithell made a mistake and flipped right in front of everybody and it held Borich and Ballance up and I was able to get by them. Once I got out front I was able to put my head down and charge.”

Borich and Ballance battled over the runner-up spot for the last hour of the race, with Borich ultimately claiming the position.

“I tried to pass Ballance in one field section and got by him, then I pushed out wide and he got back by me,” said Borich. “I finally got by him in one of the mud sections and then I tried to catch Taylor but it was too late.”

Ballance rounded out the podium, while Bithell rebounded from his crash to finish fifth behind teammate McGill.

“We came out in an open section and there was just a little bit of mud and slime on the side and it just grabbed one of my tires and sucked me into a tree and that’s all it took,” said Bithell. “Chris and Ballance were behind me and they got stuck behind me.”

And Yamaha rider Don Ockerman were ninth and tenth.

In the XC2 division, Yamaha rider Walker Fowler rebounded from a disappointing showing in last week’s opening round at River Ranch to post an impressive win in the XC2 class. Fowler passed Motorcycle-usa.com Holeshot Award winner Parker Jones to take the lead on the opening lap and then rode away to an easy win.

“That last race in Florida was kind of a bummer for us,” said Fowler. “I wanted to come out and show everyone what I had and I don’t know what happened. But today, [Adam] McGill told me to just slow down, and that’s what I did and I rode smart and it paid off.”

Photo By: Shan Moore
Bill Ballance rounded out the podium.

Jones held on to take second on his Honda (in addition to the $100 that goes with the Motorcycle-usa.com Holeshot Award), while round-one winner Brian Wolf rebounded from a slip in the first turn to finish second.

“I just spun out in that first turn and I was almost last when I got going,” said Wolf. “I just put on a charge and moved up and then on the last lap I came up on Parker and we were going back and forth and when we got to the motocross section I was able to pull him.”

In the UTV classes, Team Starrett took the win in the Open Modified division over Team Hendershot and Team Kiger.

Like the Open Modified division, the Open limited class saw Polaris dominate the podium with Team Fortner taking the win over Team Bottle and Team Howard.