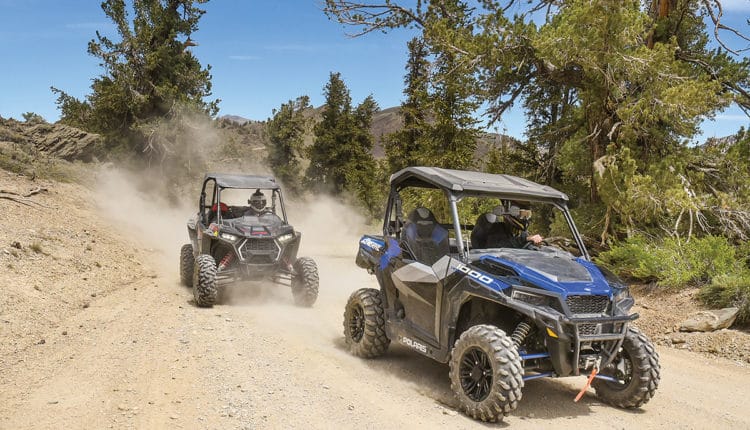 It’s no secret that Polaris has the most complete line of off-road vehicles, especially in the SxS category. From the original Ranger and RZR to the growing line of Generals, the choices are almost overwhelming. Although the Ranger is a dedicated workhorse, it is no slouch on the trails; however, its bench-seating position, steering laziness and looks do relegate it to work-first, play-some-later status. 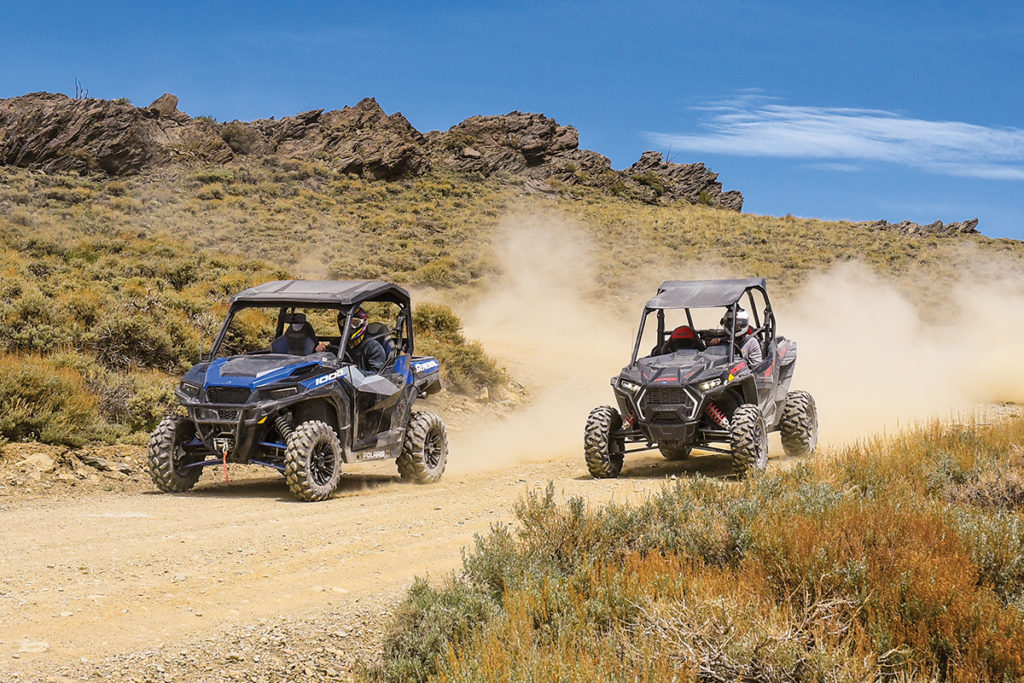 The RZR and General, on the other hand, are built for spirited rides down the trail. Figuring out which one works better for you and your trails is something we can help you out with. We took two brand-new machines with a retail price of just over $20,000 and drove the heck out of them to see what they could stand up to. Our seat time and experience will help you decide the right machine for you. 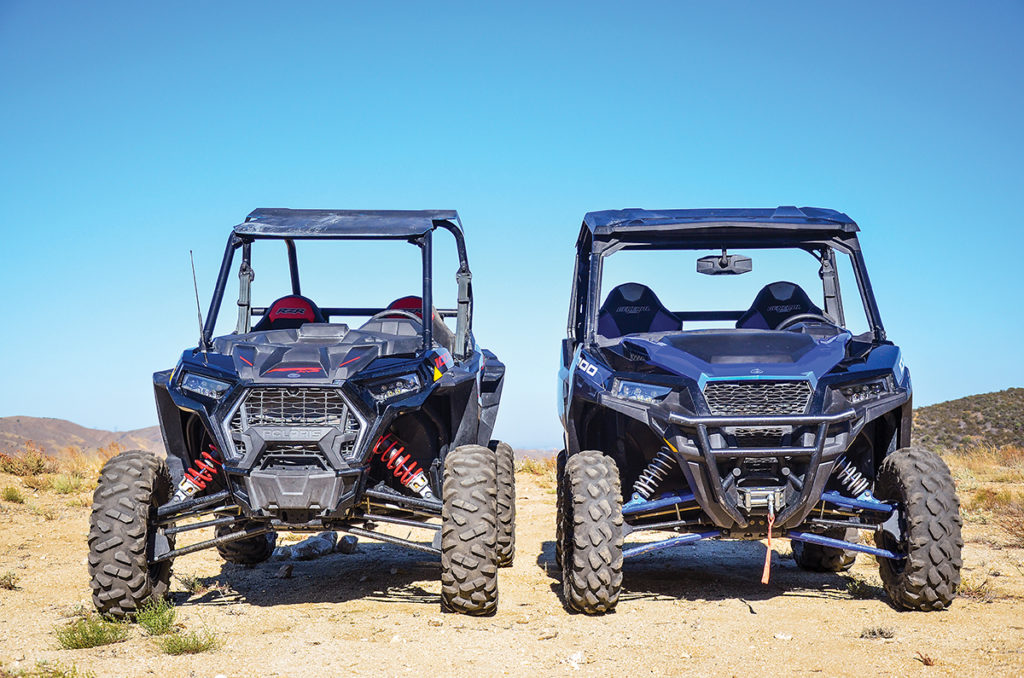 Both machines are on the higher end of their respective lines but not necessarily top-of-the-line. For the RZR, that badge would go to the Pro XP or even the Turbo S if you were looking for something with long travel. Under the General banner, there is still a General XP with better suspension, different-size specifications and, of course, a higher price; however, both of the machines we took out for a couple of days on the trails are priced similarly and would sit next to each other on the showroom floor. We will help you walk into the showroom and know which one to buy. 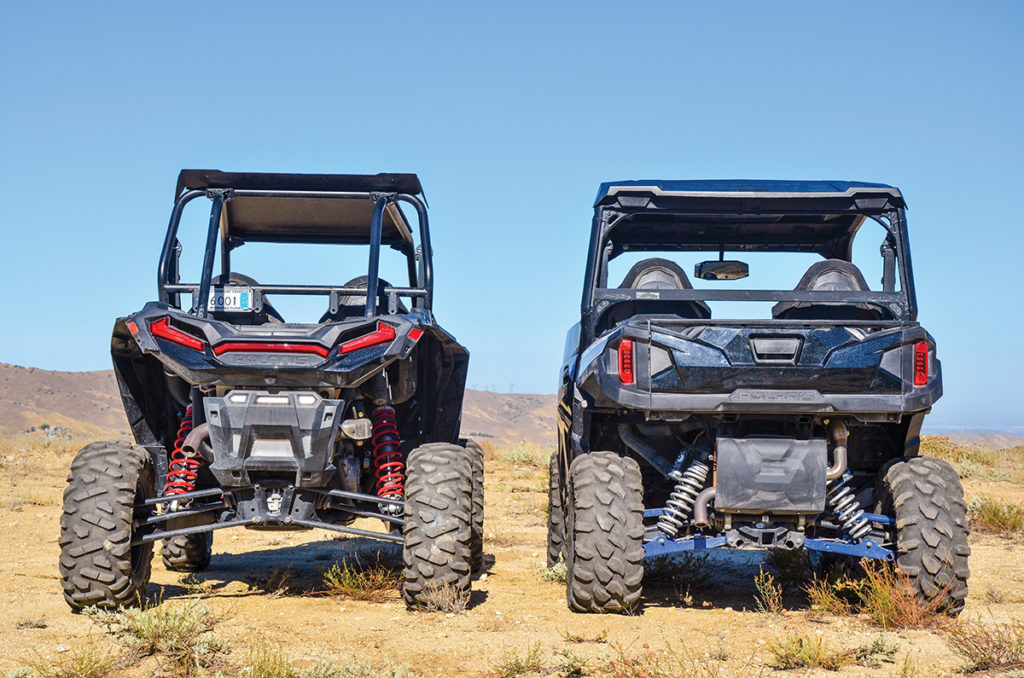 The General has a dumping rear cargo bed with a 600-pound capacity and larger dimensions. Without an accessory rack, it’s tough to hold a spare tire and cooler in the back of a RZR. It’s not a problem in the General, plus you will have room for more. If you do need to access the motor on a General, you can do it without unloading the contents of the cargo bed. The General also has an opening tailgate, and the RZR’s area is a tub type with no openings.

Up front, the RZR has a sleeker race-car look, and the General is a little boxier and more truck-like. This General has a winch installed already. The same winch could fit in the front of the RZR with the proper mounts. The room is there.

Both machines use the exact same headlights. This Premium RZR we drove does have extra the Fang accent lighting as well.

While there’s no official storage area under the hood, the General does have a larger area with a platform you could strap small, lightweight items to for safe keeping, such as tow ropes and such. Furthermore, there is a huge pre-wired electrical manifold ready for you to plug your accessories into. The RZR does have a buss bar pre-wired to the battery, but it only leaves room for a couple of extra accessories.

To enclose the cockpit, the General has full doors with door handles, arm rests and the whole bit. While this RZR does have full doors, most RZRs come with half doors. They are very minimal and sit lower. On the good side, aftermarket companies like Assault Industries have come up with products, such as door bags, to spice things up.

As far as leg and shoulder room and line of sight go, we took a few measurements for you. The door opening is 1 inch larger on the General; however, the seat is 1 inch higher off the ground. The General has 2 inches more headroom and 2 inches more leg room, but the steering wheel is closer to the driver in the General. To allow you to see over the dash, the RZR is 1 inch lower. As far as shoulder room goes, the General has 3 inches more room on each side. The seats are a full 12 inches apart in the General and less than 6 inches apart in the RZR. All in all, it’s a tighter fit in the RZR, and the door opening is an inch narrower, too.

With that wide cabin, Polaris gave the General a nice and deep center console between the seats for storage. As for additional storage, the General has more dash pockets, and they are open to easily place or retrieve items. The storage in the RZR is a bit more closed off, so items won’t bounce out during aggressive driving. Instrumentation is basically the same on each machine, and there is the same amount of empty dash space for extra switches and gauges you might want to install. Our RZR does have the Ride Command screen, and the General has an audio control box mounted on its dash.

Polaris put very different suspension under these two machines. Under the General, you will find a traditional A-arm setup similar to an ATV or even the Ranger. Wheel travel is limited to just over 12 inches in the front and just over 13 out back. The shocks are adjustable with Fox’s easy-to-use QS3 knob. Under the RZR, you will find A-arms up front with 16 inches of compression-adjustable travel via Walker Evans shocks. Out back, the same-style shocks are connected to long trailing arms that move 18 inches. Two other measurements that affect bump absorption are tire size and wheelbase. The RZR’s 29-inch-tall Maxxis Big Horns are 2 inches taller than the General’s Maxxis Coronados. The RZR’s second advantage is a 9-inch-longer wheelbase, even though the overall length of the RZR is only 1 inch longer.

What these numbers mean is that the RZR simply eats up the bumps twice as well as the General, plus it’s more stable at high speed. Whether you’re driving over whoops and moguls or over rocks, roots and square-edge bumps, the RZR does it better; however, the General can take the bumps, it just has to be pushed a little less. Take the General on smooth-rolling trails, graded power-line roads or a Forest Service route and it does great, but try to keep up with a RZR in the rough and it’s not going to happen. This General is slightly more stable on off-camber trails and has less body roll in the corners.

For comparison, the suspension under the General is more like the RZR S models. Actually, it’s identical to the RZR S 900 and 1000.

While the same Polaris, ProStar twin-cylinder engine is used in the General and RZR, the RZR gets a better tune, bigger EFI system and 10 more horsepower. They each have a smooth CVT transmission; however, the General is a bit smoother. In a drag race with perfect traction, the General is only a few car lengths behind. As for top speed, the RZR hits just a little higher than 75 mph, and the General tops out just under 70. In low range, things are almost identical. Both are good rock crawlers and actually run in the tight stuff almost equally well. The ground-clearance advantage of the RZR helps it in the rocks, too. What you can do on the General is unlock the rear differential. This allows it to turn tighter at slow speeds, and on concrete (like your driveway), an unlocked rear end won’t leave tire marks. Street driving is better with an unlocked rear end, too.

If you typically ride on smoother trails, logging roads or Forest Service access roads, and have the need for more storage and cargo, we like the General. It’s not as stable as the RZR at high speeds, but if you want to carry extra cargo, you shouldn’t be driving that fast anyway. In the rough, it’s no contest; the RZR outshines the General all day. But, that’s about the only area where the differences between the two really stand out. If you typically drive in rough terrain all day, you want the RZR because the General will wear you out. The same would go for the RZR 900 S or 1000 S if you are considering those. The General XP does have a bit more wheel travel, but not nearly as much as the RZR. It’s an improvement, but nowhere close to the same, and it’s $2200 more than this Deluxe model.

We would actually like to see General bodywork, or just the bed space, on a RZR XP1000 or XP Turbo chassis. That would give us the best of both worlds as far as fun and function. Polaris is always improving, so maybe they are working on that very machine right now. We hope so. 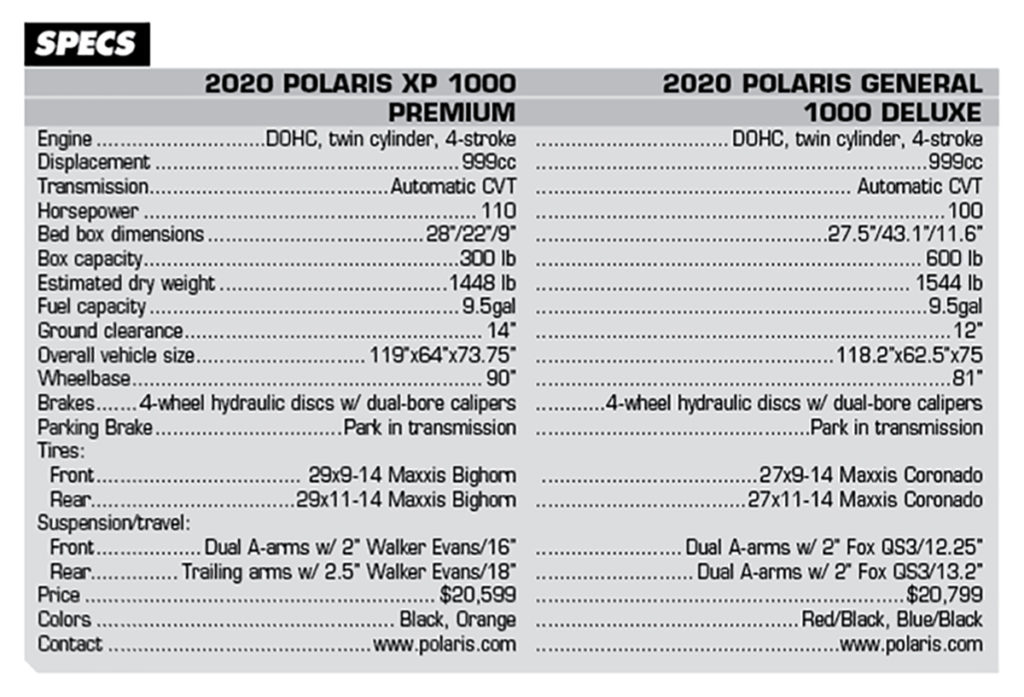